WWE Night of Champions, or Why Seth Rollins is the New Shawn Michaels

Well sir, Night of Champions is now in the history books, and I'll be damned if it wasn't a highly entertaining, satisfying little PPV.  At seven matches (plus a pre-show match) NOC was nice and streamlined, and every bout was given time to breathe.  The finishes all made sense, nothing was overbooked, and we got two potentially very important title changes that could have long-standing ramifications.  Let's review, shall we? 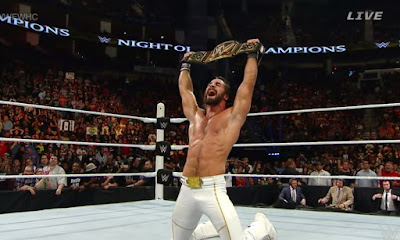 The opening match kicked things off beautifully, as NXT grad Kevin Owens challenged the powerhouse Ryback for the Intercontinental Title.  This match accomplished exactly what it needed to and got just enough time to do it.  Owens was obviously outmatched in the strength and size department, but he targeted a limb and worked the crap out of it, utilizing innovative attacks to keep the match interesting.  Ryback staged a late-match comeback but Owens used classic heel tactics (the eye rake and the pull of the tights) to escape The Big Guy's finisher and score a quick rollup pin.  Kevin Owens is a perfect candidate to help restore prestige to the I-C Title like Daniel Bryan had intended.  He's one of the hottest heels in the company, excellent on the mic, delivers spectacularly in the ring, and can believably have his way with most of WWE's midcard pool.  I love this development and hope Owens gets a nice long reign.

The rematch between Dolph Ziggler and Rusev was next, and it was about as good as their SummerSlam bout - very well-worked by both guys and they got plenty of time to make an impression.  Unlike its predecessor this match actually had a finish, where Summer Rae got into a spat with the referee and threw her shoe (Who throws a shoe?  Honestly.), hitting Rusev by mistake.  Ziggler then hit the Zig-Zag (This man desperately needs a new signature move) for the upset.  Lana was absent due to injury but I'm hoping she figures into the inevitable third match by turning back heel and rejoining Rusev.  Those two need each other.


In the third slot was WWE's best act, Tag Team Champions The New Day, defending against the returning Dudley Boyz.  This was a fine tag bout, with Xavier Woods arguably stealing the show with his antics at ringside.  This guy is comic gold.  My favorite bit was Woods breaking into "Gonna Fly Now" on the trombone while his partners dominated the action in the ring.  The match ended in a Title-saving DQ as expected, and we'll see these teams duke it out again.  Solid stuff here.

I really dug the next match, Nikki Bella vs. Charlotte for the Divas Championship.  It wasn't at all the type of match I expected; Charlotte tweaked her knee in the opening minutes, and Nikki targeted the injury relentlessly for the next ten minutes.  It's a testament to Nikki's vast improvement in the ring and Charlotte's selling ability that this didn't devolve into a snorefest.  On the contrary, Nikki's offense was clever and credible, and they had me every step of the way.  Charlotte's comeback didn't happen until the closing moments and she finally got the win with the Figure 8.  Her post-match celebration with daddy Ric Flair was a genuinely touching moment.  Putting the Divas Title on Charlotte is a statement that the main roster crew are finally ready to embrace the idea of a serious women's division, and given how completely female athletes have taken UFC by storm, this is just good business.  In terms of pure storytelling this was a huge match.

The Wyatts vs. The Shield 2.0 was fifth, and the mystery partner was of course revealed to be Chris Jericho (and Dan Moore's trousers suddenly got very tight).  Sadly both Dan and I, watching the show separately, immediately thought "Welp, that's who's getting pinned."  The match itself was nowhere near the level of the Wyatts-Shield 2014 bouts, but it was still a wild, engaging brawl that showed off Braun Strowman's impressive power.  This guy has oodles more potential than Erick Rowan, who was a good third man in the group but doesn't have much beyond that.  This feud will obviously continue, hopefully in a Hell in a Cell match.  Imagine the chaos we'd be treated to inside that cage.  Reigns & Ambrose just need to find a more permanent third guy.  Say, I hear Cesaro's available....

The final two matches affirmed just how goddamn good the WWE Champion is.  Seth Rollins was tasked with wrestling two consecutive main events against two very different opponents, and he delivered one of the best overall performances of his career.  The US Title match was first, as Rollins once again locked up with John Cena.  This was similar to their SummerSlam match but a bit more to the point.  Both guys started pulling out their big moves much earlier and we were treated to an amazing display, which has become the norm for both Rollins and Cena.  As predicted, Cena regained the US Title and can go back to building equity in that championship (He's done a wonderful job thus far).

An exhausted Rollins then had to face the returning Sting, who looked to be in much better shape than at WrestleMania.  Sting dominated the first half of the match until Rollins shoved him through a table, evening the playing field and repositioning Sting as the sympathetic character.  The remainder of the bout then became an intense war of attrition with ringside dives, turnbuckle powerbombs (one of which knocked the wind out of Sting for a good three minutes), and traded finisher attempts.  Rollins gutted out the Scorpion Deathlock, eventually reaching the ropes, and when Sting went for it again Rollins rolled him up with an inside cradle for the squeaky clean win.

That WWE gave Rollins roughly the last third of this show, plus a clean win over a legend, speaks volumes of how much the company is invested in him.  Ratings have been stagnant, which in the past has led to Panic Mode (read: Cena wins back the belt), but it seems the higher-ups are still all-in with Seth Rollins, as they should be.  His recent performances have been nothing short of transcendent, bringing to mind the 1994-95 incarnation of Shawn Michaels.  At that time Shawn was a top heel but delivered amazingly athletic matches, often upstaging his babyface opponents.  For a lesser-caliber performer this would certainly ruin their heel status; flashy offense is almost always reserved for the good guys.  But both Michaels and Rollins were/are so strong at conveying unlikable characters they never lose that vital fan heat.  Yes, Shawn eventually turned babyface and became one of the most beloved heroes of all time, and I fully expect Rollins to go that way in the next 12 months.  But for right now Rollins is the best heel in the company as well as the best in-ring performer on the active roster.

I'd be lying if I said I'm excited about Rollins vs. Kane next month.  They really need to stop going back to the Kane well; the man's 48 years old and nowhere near a top-flight wrestler anymore.  Still, this is Seth fucking Rollins we're talking about, so if anyone can get a good match out of the aging Demon, it's him.

Overall I really enjoyed Night of Champions.  Rollins completely stole the show and looked like a megastar out there, two incredibly deserving young talents won their first main roster Championships, two midcard tag team feuds were furthered, hopefully leading to superior rematches, and most of the roster has clear direction heading into Hell in a Cell (except Cesaro, can we for fuck's sake do something good with him??).  A definite thumbs-up from me!

Best Match: Seth Rollins vs. John Cena
Worst Match: Probably the Tag Title match by default, but that was good too.
What I'd Change: Other than finding a spot for Cesaro, not much.
Most Disappointing Match: Nothing really disappointed here
Most Pleasant Surprise: Sting's performance
Overall Rating: 7.5/10
Posted by Justin Enuffa Ballard at 9:56 AM