Editor's Note: Our very own Man on the Street Dan Moore has a brand new celebrity follower on Twitter!

During the wee hours of the night, one likes to sleep soundly and dream. Typically one doesn't like to get woken up at 1:23 AM by a phone you forget to silence. That happened to me last night. I groggily woke up and looked at the phone. What I saw was something strange. I had gained a new Twitter follower. 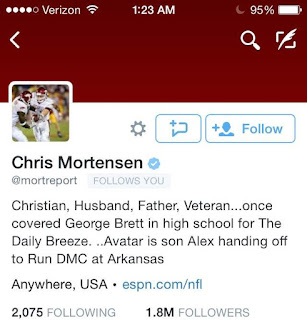 Now, gaining followers in the middle of the night isn't a weird thing. But this particular one is quite strange to me. Good ol' Mort has been on radio silence for about a week now. Not reporting on the biggest NFL story of the year. Tom Brady's suspension for Deflategate was overturned by the courts, and Mort has been silent. Not a word on Twitter, Facebook, ESPN or even MySpace (but who knows about that one).


He's stood by his story that 11 of 12 footballs were 'significantly deflated' even though that has been debunked numerous times. He's lied about the Krafts apologizing to him, even though Jonathan Kraft said they didn't. And he's ignored requests to appear on Boston radio stations to debate these issues. Yet, while all this is going on, he ignores his Twitter feed but throws me a follow? Moi? Perhaps it's my insightful NFL posts like this or this. Could he have seen me with decorated NFL superstars?


Maybe he's a fan of dive bars like this one or perhaps this one. Or maybe he's just really infatuated with the incredible tweets I send out daily, like this one. 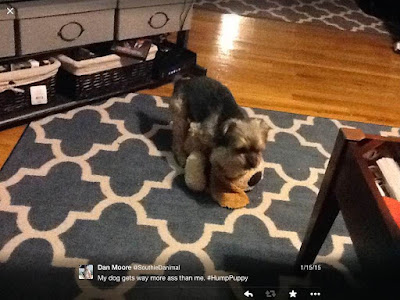 Whatever the case may be, welcome aboard Mort! Enjoy my daily insider knowledge!
Posted by Justin Enuffa Ballard at 10:45 AM