Following my Top Ten 80s Matches and Top Ten 90s Matches, today it's my Top Ten Double-Aught Wrestling Matches (that's matches of the 2000s).  The pro wrestling industry went through catastrophic changes in the early part of that decade, as WCW and ECW were both sold to Vince McMahon, making the WWF the only big game in town.  The WWF was then forced to change its name to WWE, while upstart promotions TNA and Ring of Honor sprouted in 2002.  We saw a new crop of headliners in Brock Lesnar, John Cena, Randy Orton and Batista, plus a surge in the quality of indie wrestling, led by AJ Styles, Samoa Joe and Bryan Danielson.  The industry began shedding the "hardcore" style so prevalent in the late 90s and returned somewhat to a traditional mat-based focus (with exceptions of course), and eventually WWE even went back to family-friendly PG content.  While the overall product was very uneven, it's safe to say the 2000s brought us some of the very best matches we'd ever seen.  Here now are ten of them..... 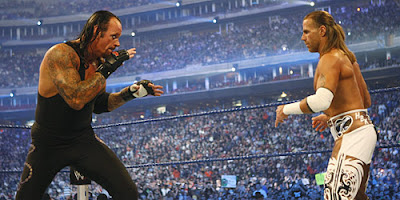 In 2009 WWE's product was stagnant as ever, with the same five or so guys having been featured at the top of the card for a good three or four years straight.  WrestleMania 25's lineup featured all the usual faces in prime spots and very few young stars, and I was frankly burned out on the Cenas, Ortons, Triple Hs, and Edges of the world.  I honestly didn't get caught up in the build for this match either - two 45-year-olds reigniting a few from eleven years earlier?  No thanks, man.  Of course I was wholly incorrect, as these two legends wove together an absolute 30-minute masterpiece, showing us all how it's done.  A prototypical WWE "main event," this match featured loads of reversals, finisher kickouts, and some crazy outside-the-ring dives (one of which looked like it killed Taker dead).  This match ended up being one for the ages. 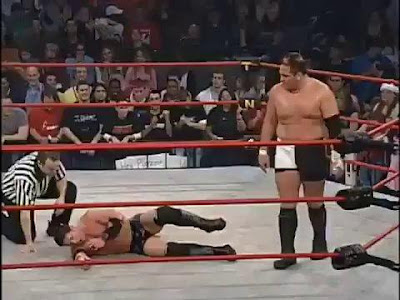 There have been more action-packed matches, more brutal brawls, more epic contests.  But in December 2005 Samoa Joe and AJ Styles told a story between the ropes that has seldom been equaled before or since.  Joe arrived in TNA that summer and was immediately pushed as an unstoppable monster, who had his way with basically everyone in the X-Division.  AJ was the superbly skilled conquering hero; the last line of defense against Joe's reign of terror.  The pace started out methodical but escalated continously throughout the match.  Joe dominated AJ with his brutal moveset, but the defiant Styles refused to back down, eventually kicking out of Joe's pin attempts at the one-count just to stick it to the villain.  Blood pouring out of his mouth, Styles managed to lift the 280-pounder up for the Styles Clash, and despite diminished height the move still looked absolutely vicious.  Joe kicked out however, and finished AJ with the rear naked choke, capping off one of the best examples of pure in-ring storytelling I've ever seen. 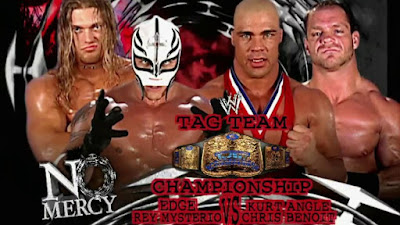 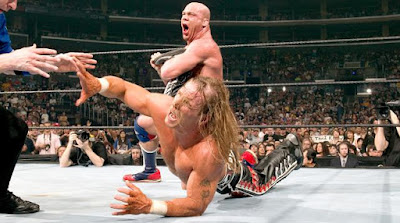 WrestleMania 21 was all about building the next class of WWE headliners, as Dave Batista and John Cena were positioned to shine.  But for diehard wrestling fans like me the main event of this PPV was the interbrand challenge between Shawn Michaels and Kurt Angle.  Despite never having wrestled each other before, these two put on a breathtaking 25-minute classic that ranks high on the all-time 'Mania list.  Shawn played the charismatic daredevil as usual, while Angle was the grizzled mat technician.  In dramatic fashion Angle forced a rare Shawn Michaels tapout with the anklelock, kicking off easily the best feud of 2005. 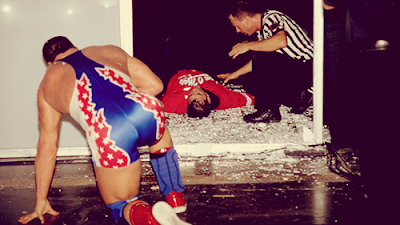 Simply put, one of the wildest matches I've ever seen.  At King of the Ring 2001, the Olympic Wrestling Champion and Vince McMahon's Son tore the roof off the Continental Airlines Arena in the most unexpectedly awesome, best garbage match in the history of the business.  While the overarching storyline was the beginning of the most disappointing angle of all time, these two delivered an amazing, startlingly violent spectacle that on more than one occasion actually made me fear for Shane's life.  Angle dominated early with his wrestling acumen, but Shane's fearless scrappiness kept him in the match.  Then the action spilled out of the ring and into the entranceway, where Kurt Angle nearly murdered his boss's kid.  Angle attempted an overhead belly-to-belly suplex through the glass staging area, but there was a problem - the glass didn't break.  And Shane landed on his head.  So Angle did it again, this time successfully, and with sickening results.  They continued fighting behind the glass, where Angle attempted the same move and once again the glass didn't cooperate.  So Angle simply rammed Shane through headfirst, resulting in the striking image of a bloodied Shane exploding through an opaque plane of glass.  And that wasn't even the end!  After 26 minutes Angle set a piece of plywood atop the turnbuckles and Olympic Slammed Shane to the mat for the three-count.  This was the best match on the best-ever KOTR PPV, and in my opinion the best match of 2001. 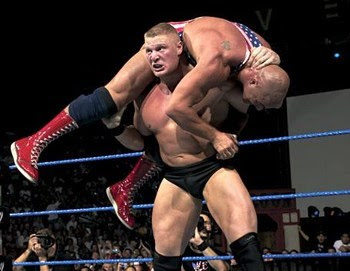 Almost certainly the best feud of 2003 pitted Kurt Angle against Brock Lesnar, and the climax of said rivalry took place on the September 18, 2003 episode of Smackdown in a 60-minute WWE Championship Iron Man match.  The merciless Lesnar employed an unorthodox strategy early in the match, bashing Angle with a steel chair and sacrificing a fall by disqualification, in order to gain a long-term advantage.  Lesnar would dominate much of the match and pull ahead 5 falls to 2.  Angle spent the suspenseful third act of the match trying to catch up only to fall just short, losing the bout and the WWE Title 5-4.  To this day I consider this not only Lesnar's best-ever match, but the best Iron Man match of all time.  The ruthless bully vs. valiant athlete story was magnificently told and resulted in a match full of both action and drama.  This is wrestling, my friends.

Bryan Danielson's greatest opponent according to me was Nigel McGuinness.  These two were tailor-made to wrestle each other and it's a shame Nigel wasn't able to pass WWE's medical so the mainstream audience could've seen this matchup.  If you haven't seen any of their matches together you need to seek them out right now.  Both European style-influenced, their bouts had a fluidity and poetry unlike any pairing I've ever seen in a wrestling ring.  This match was to unify the ROH World and Pure Titles (the Pure Title was a secondary belt contested under "pure rules," which included no punching, only three rope breaks, and the champ could lose the belt via countout).  After 25 minutes of rugged action that included Nigel being busted open hardway on the ring post (leaving a grotesque potato on his forehead), Bryan won via ref stoppage with repeated elbows to the jaw.  This was the best match of 2006. 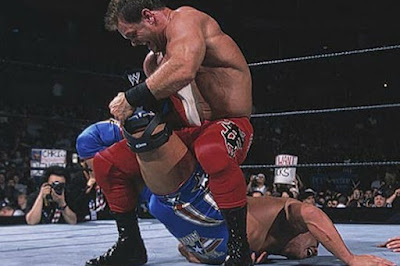 The 2003 Rumble was all about elevating Brock Lesnar, but on the undercard WWE Champion Kurt Angle defended against Chris Benoit in a near-perfect match.  This was 19 minutes of pure excellence as the two ring generals started out slow and built to a fever pitch, showcasing their mat wrestling acumen and ingenious submission reversals.  Angle finally got the win with a modified Ankle Lock, but the Boston crowd was so blown away by this match they gave Benoit a standing ovation.  At the time Benoit was my favorite wrestler and so this was an amazing moment to be a part of.  Obviously the events of June 2007 have tainted this memory, but this is still the best match I've ever witnessed live. I said their Unified match was the best of 2006, but Danielson and McGuinness had an even better match in 2007 at ROH's PPV Driven.  This bout was even more technical and both men utilized some of the most innovative holds I've ever seen.  Still the action spilled to the outside on more than one occasion and at one point McGuinness suplexed Danielson across the ring barricade in an absolutely sick-looking spot.  The match climaxed with both men bouncing off the ropes and headbutting each other (probably not advisable in hindsight given Bryan's concussion issues), resulting in Bryan's forehead being split open.  Still Bryan won the match with his old finisher Cattle Mutilation, thus capping off one of the greatest wrestling matches I've ever witnessed. 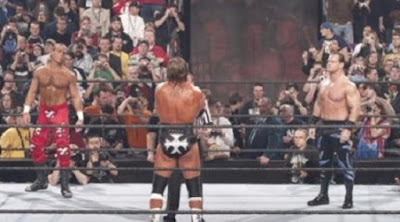 Probably my favorite wrestling match of all time.  Certainly my favorite WrestleMania match.  This was the first Triple Threat main event in WrestleMania history, and it's an example of a perfectly worked match, where all three guys executed their roles flawlessly.  There was brutal, hard-hitting action, high spots, drama, submission wrestling, and two sick-looking bladejobs.  Somehow these three took the usual triple threat format (one guy takes a powder while the other two fight) and made it feel fresh, organic, and unpredictable.  The match was full of false endings, as one man would have another on the cusp of defeat only for the third to appear out of nowhere to break up the pin/submission.  The climactic final moments built to one of the most suspenseful tapouts in history, as the crowd favorite Benoit finally made Triple H submit in the center of the ring to become the World Champion.


Posted by Justin Enuffa Ballard at 8:36 AM