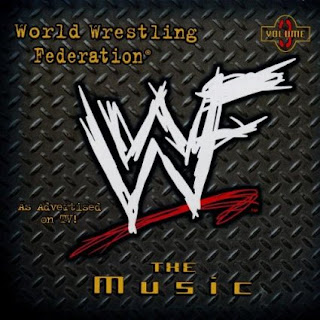 Entrance themes are such an integral part of establishing a character it's hard to imagine a time before they were universal.  When I started watching this wacky fake sport in 1986 only certain acts were given entrance music.  Mostly it was headliners and championship contenders, otherwise guys came to the ring to only the ambient arena noise.  Most puzzling is the fact that perennial attraction Andre the Giant never had an official entrance theme (Toward the end of his career Vince McMahon's "Stand Back" became his them for video packages, but it wasn't used for his actual ring entrance).  There were other times when a piece of music was intended for one wrestler but co-opted for someone else.  Hulk Hogan's "Real American," a theme we now consider inseparable from the man, was originally written for the US Express (Mike Rotundo & Barry Windham).  Kurt Angle's theme, repurposed by the fans as "You Suck," was once the entrance music for "The Patriot" Del Wilkes.  Then of course there was Jimmy Hart's "Crank It Up," recorded for the Piledriver album, which the Young Stallions "stole" for their own use.  I always got a kick out of that one.

At any rate, a wrestler's entrance theme can say so much about them.  It can help illustrate what type of persona they use.  If the music is dark and foreboding, the character probably is too.  If the music is bombastic and upbeat, the character probably has a loud personality.  When done correctly, the first note of a wrestler's theme can send the crowd into a tizzy, and can be just as important a part of the fans' experience as seeing that person in the ring.

The following ten themes exemplify these qualities.  In each case the entrance music has become forever linked to that character, evoking a massive crowd response every time it blares through those arena speakers.

Beginning with one of the coolest sound effects ever designed, Jericho's entrance theme originally counted down a "Millennium Clock" before exploding into a Rage Against the Machine-esque slow rocker that also seems to have a bit of Beastie Boys influence.  Between the lyrical references to metal bands and the conjured image of walls being broken down, this song conveyed Jericho's iconoclastic ring persona brilliantly.

This one takes a while to get going, but man, when it does it's pure detuned metal awesomeness.  Boasting an anvil-to-the-skull, stomp-worthy guitar riff followed by a choral chant, this intimidating theme does everything great entrance music should.  It sets the tone for the character, it imprints itself on your brain, and it encourages audience participation, as the crowd chants and gestures along with Balor.  This is my favorite current wrestling theme.

I believe Mankind was the first and only wrestler to ever have separate entrance and exit themes.  Inspired by The Silence of the Lambs, Mick Foley's idea was to enter to a dark, suspense-inducing dirge, a la Howard Shore's haunting Lambs score, and then after he'd won the match the crowd would hear a delicate, serene piano melody reminiscent of the Hannibal Lecter scene in which he's just killed his jail guard and pauses to soak in the classical piece he'd been listening to.  These two pieces of music were executed flawlessly and created a unique aura for the Mankind character.  Unfortunately they were later replaced by the rather goofy "car crash" music we've all come to know.

Speaking of auras, Bill Goldberg got further based solely on his intangibles than possibly anyone else in wrestling history.  What he lacked in in-ring skill and promo ability he more than made up for by just OWNING the unstoppable monster babyface persona.  One could argue Goldberg's TV appearances were all about the ring entrance, from headbutting lockers backstage to the security detail to breathing pyro smoke, the man was totally believable as that character, and his gladiatorial march underlined everything.  Despite featuring clearly synthesized horns, Goldberg's music brought to mind images of a warrior entering the Roman Colosseum to do battle.  This was easily the best entrance music of WCW's Nitro era.

It took three tries for WWE to find a truly great entrance theme for Edge.  Initially it was "You Think You Know Me," which was serviceable but no great shakes, then it was the frankly awful Rob Zombie number "Never Gonna Stop."  Finally upon his return from injury in 2004 the company used "Metalingus" by Altar Bridge (featuring the excellent Myles Kennedy on vocals), and a legendary entrance theme was born.  This emotionally-charged high-energy anthem worked whether Edge was a babyface or a heel, was a helluva good song on its own, and was in my opinion the best theme of the past ten years.

Made famous by Stanley Kubrick's 2001, this tone poem by Richard Strauss was meant to convey the concept of man evolving beyond his boundaries and reaching the next level.  Who better to enter the ring to these majestic strains than the elitist power broker Ric Flair?  One of the best-used pre-existing pieces of music, "Zarathustra" gained a whole new following among wrestling fans due to its association with the "Nature Boy."

Another classical piece now forever associated with a pro wrestler, Sir Edward Elgar's joyous march lent itself seamlessly to the larger-than-life aura of Randy Savage.  A character never shy about tooting his own horn, Savage exuded pride and boastfulness, and the music provided an almost satirical backdrop for his pageantry.  I can't ever hear this piece without thinking of the "Macho Man."

WWE composer Jim Johnston's Rage Against the Machine ripoff was so completely correct for this band of obnoxious rebels he should've won a Grammy.  The music begins with a light, palm-muted version of the signature riff and slowly builds to a peak before the distorted guitars take over and DX emerges from the curtain.  The song's beat even has an arrogant swagger to it, mirroring the antics of its subject.  Years later when three Rage members formed Audioslave with Chris Cornell and released their first single "Cochise," I couldn't help draw parallels between that song's structure and the DX theme.  The originals almost seemed to be imitating the imitators.

If ever a piece of music were married to a wrestling character, this is it.  The Undertaker's funereal requiem is probably the single most intimidating entrance theme in wrestling history, floating eerily just like Taker seems to do.  Try to imagine Taker's elaborate ring entrances over the years without this music ringing through the arena.  It wouldn't work, would it?  There have been variations on this theme; in 1998 for example they added metal guitars underneath it to give it more urgency.  But for my money the classic version is still Taker's best entrance theme.

Has any one second of audio instantly brought a live audience to its feet like that iconic shattering of glass?  Any time you heard that noise on television or in an arena it was immediately followed by an absolutely deafening crowd roar.  And then the world's most badass entrance theme was underway, with a syncopated E-F metal guitar riff that heralded the arrival of The Rattlesnake.  There's no question about it, hearing that particular piece of music made you wanna beat someone up, and thus it was both the perfect theme for the WWF's toughest SOB (who could beat someone up for you), and the greatest entrance theme of all time.

Posted by Justin Enuffa Ballard at 10:33 AM