I'm back to bitch and moan about a movie that I find simply too ridiculous to believe..... 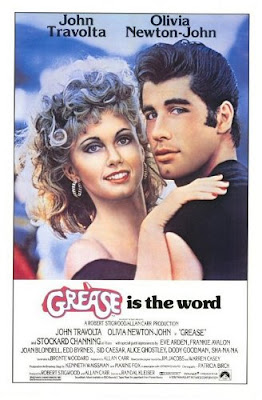 So this past weekend my wife forced me, very much against my will, to watch the classic musical Grease for the first time from start to finish.  I had seen bits and pieces of it on TV over the years, probably even the entire movie all told.  But never had I sat through the film end-to-end and experienced what so many girls (and probably some dudes too) of my generation were so in love with.

The lighthearted 1950s throwback starring Olivia Newton-John Travolta (like "Bennifer" only waaaaay longer) tells the story of two unlikely high school sweethearts and their star-crossed romance.  Travolta plays Danny Zuko, the bad-assiest greaser dude in the school who wears leather jackets, supes up cars, and can dance almost as good as Tony Manero (....wait....).  Newton-John plays Sandy Olsson, a straight-laced Aussie chick who met Danny on the beach over the summer and they had a real good thing, if ya pick up what I'm puttin' down.  But her parents plan to move the family out back to.....the outback, so she thinks she and Danny are destined to never see each other again.


But wait, Sandy's parents change their minds and she ends up at Danny's high school.  And then each of them informs their respective group of friends about their summer fling, but with VERY conflicting stories.  She describes Danny as a perfectly romantic gentleman, while Danny describes her as a filthy slut (BONG!).  Uh oh.  The rest of the movie is just essentially the "will they or won't they" schtick, with the obvious outcome, a buncha song & dance numbers, and a twist where at the end Danny starts dressing like the respectable jock douchebags and Sandy starts dressing like a, well, filthy slut (BONG!), complete with leather jacket, skin-tight chaps and a newfound smoking habit (I wonder if she's ever tried reefer).  So I guess the moral of the story is, "Just be whatever your insensitive prick of a boyfriend wants you to be and your relationship will be great!"


But fuck all that stuff.  What I'm here to talk about is the one part of the movie that is unforgivably hard to swallow.  All the principle characters are supposed to be high school students, in the neighborhood of 17 or 18, right?  Now, when I watched this film it struck me, "These folks look a damn sight older than high schoolers.  Well, maybe it's the era, like when you see old pics of your parents and they just look much older than teenagers."  Nope.  Check out the ages of the cast members as of 1977 when the film was shot:

Got that?  Only two of the twelve main teenagers are played by anything even resembling teenagers.  Travolta was a spry 23 but he looked and carried himself like a grown-ass man of 30.  But Newton-John at 29?  Craterface and Cha Cha at 30 and 29?  Stockard Channing at THIRTY-THREE??  She's literally old enough to have a teenager of her own!  Get the fuck outta here with this.  I wouldn't be surprised if one or two of these kids were actually older than some of the adult characters in this movie.  Look, I can buy people spontaneously breaking into song and somehow delivering neatly choreographed dance numbers on the fly, alright?  I can buy Sandy stickin' with Danny even after he gets all rapey at the drive-in.  I can buy her totally changing her style and attitude to get him to notice her again and young girls everywhere somehow thinking this was an acceptable message for a film aimed primarily at young girls.


But where I draw the line in the sand(ra dee) is middle-aged motherfuckers trying to pass as high schoolers.  Did each of these characters get held back a couple DECADES?  Maybe the movie actually takes place in 1978 but this entire school is populated with students from the 50s who just couldn't pass Social Studies for twenty years.  It's like a way scarier, sing-songy version of M. Night Shyamalan's The Village.

Screw this movie, I'm Sandra Dee-partin' for the hills.

Side note: Yesterday I took a Grease trivia quiz on Facebook and I got 100%.  And now I hate myself.

Posted by Justin Enuffa Ballard at 8:41 AM