Welcome to another edition of Awesomely Shitty Movies, where I dissect a cinematic clunker that I also happen to enjoy. 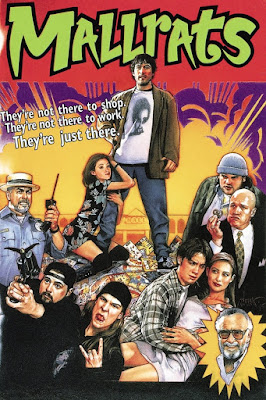 Today's topic is Kevin Smith's second film Mallrats.  After the indie success of his smart, slacker-centric Clerks in 1994, Smith was given a much larger budget by Universal Studios to do basically the same type of movie.  But this time our pair of lovelorn, do-nothing 20-something protagonists spend their aimless free time at a mall, trying to repair their failed relationships.  Returning from Clerks are the zany supporting characters Jay & Silent Bob, who in this film are given some action-comedy set pieces and get to directly affect the plot.  The studio more or less took Smith's trademark formula and attempted to make it more mainstream, with very mixed results.  At the time I found this film unequivocally hilarious, but it's probably aged the worst of Smith's View Askewniverse outings.

So let's look at what worked and what didn't....

Almost everything great about his movie begins and ends with Jason Lee.  The former skateboarder became a major find for Kevin Smith, who would cast him in numerous subsequent films.  But perhaps no role was as big a show stealer for Lee as Brodie Bruce, the mall-obsessed comic book and video game junkie whose lack of ambition has cost him his girlfriend Rene.  Lee's brilliantly vulgar, reactionary delivery is responsible for most of the film's best lines, and his natural charisma allows the viewer to identify and root for this character in spite of his many flaws and obnoxious persona.

One of two principles cast for their name value, Shannon Doherty gives a harsh but oddly likable performance as the strong-willed, no-bullshit Rene, who's reached the end of her patience with her lazy, inattentive boyfriend.  The focus of the movie is on the male characters, but Doherty admirably conveys why the firebrand Rene is such a good match for Brodie.

Character actor Michael Rooker plays the film's main antagonist Jared Svenning, whose primary motivation is to keep T.S. Quint (Jeremy London) from dating his daughter.  Svenning is an aspiring game show producer/host whose pet project Truth or Date serves as the film's Maguffin.  Rooker plays this role with over-the-top relish, serving as both a villain and something of a buffoon who, as a television producer, is in over his head.

It's impossible to dislike these two fools.  Jason Mewes created a uniquely imbecilic stoner character in Clerks, and he turns up the volume here, while Kevin Smith uses mostly facials and body language to bring Silent Bob to life as an unwitting action hero.  At the time I liked seeing these two do more than simply stand in front of a convenience store, but sadly most of the action stuff doesn't hold up very well.  Regardless though, these two are always good for a laugh, as the thread that holds the View Askewniverse together.

This movie's real dumb but it makes me laugh.  Many of the jokes are beaten into the ground ("The back of a Volkswagen" bit for example), and the action-comedy stuff involving Jay & Silent Bob trying to trash the game show set is all clunky, worked-over material, but Mallrats still contains Kevin Smith's signature nerdy, verbiose charm.  Couple that with the aforementioned spectacular Jason Lee delivery and there's plenty here to keep one entertained.  In a dumb way.

Now for the stuff that keeps Mallrats from being a really good comedy.

The studio insisted on casting a somewhat well-known actor with a pretty face in the lead role of T.S. Quint, and unfortunately London seems totally out of place here.  He's clearly the straight man to Jason Lee's outlandish Brodie character but even beyond that T.S. is devoid of the charisma necessary for the audience to care about his romantic plight.  Also London is incapable of making Smith's wordy dialogue feel even remotely natural.  Take for instance this line - "Can you two testosterone-seething, he-man, comic book fans finish up with this display of tough guy back-and-forth? I've got some questions that need answering."  Now that's a pretty terribly written, rambling line that no human would ever say quite like that, but London doesn't even seem to make an effort to make it sound organic.  He rushes through every bit of dialogue like this as though being directed by George Lucas circa 1976.  Kevin Smith's early films are rife with "You can type this shit but you can't say it" moments, but usually his leads are able to make it work.  Jeremy London does not fall into that category.  Someone like Matt Damon would've been a far better choice for this role.  Hell, Affleck's in this movie, so why not?

The other member of the lead couple, Forlani's performance feels like she'd rather be anywhere else than in this movie.  She's stilted, mopey, and has almost no chemistry with her romantic co-star, and thus we don't care whatsoever whether the T.S.-Brandi relationship is rekindled or not.  Contrast that with Brodie and Rene's undeniable amorous tension, and there's just nothing here to root for.  Brandi is a flatly written character to be sure, but Forlani's uninspired performance doesn't help.

Kevin Smith has always been in love with words, and his dialogue at its best reflects that while offering a far more introspective, philosophical tone than one would expect from films like these.  That said, in his earlier films especially, Smith often seemed to lack the discipline to keep his dialogue readable.  I mentioned Jeremy London's issues with tripping over Smith's excessive verbiage, but he's not the only one.  Multiple lines in this film become distracting because they just don't sound like things real people would say.  Take a gander at these linguistic mine fields...

-Do I give a shit what two comic labels are crossing over characters, selling two editions of the book in varied-ink chromium covers?!

-There is something out there that can help us ease our simultaneous double loss.

-How is it that I go from the verge of hot Floridian sex with Brandi to Man of Steel coital debates with you in the food court?

Smith has made few bones about the fact that Mallrats was kind of a case of him selling out.  Universal offered him a movie deal working with a real budget and he was happy to take it.  Unfortunately he was also somewhat creatively beholden to the traditional comedic structure, where our heroes lose their girlfriends and spend the whole movie plotting to get them back.  But Smith's characters and dialogue work better in a non-traditional narrative.  Clerks was largely plotless; it was just two guys hanging out at a convenience store, dealing with life.  Mallrats involves a very specific, unoriginal storyline with an archetypal villain, badly staged action sequences, and two of four lead actors that don't belong there at all.  Had Smith been given free reign Mallrats probably would've had much more substance.

-Wait, so T.S. had booked a trip to Florida for him and Brandi, and not only does she back out at the last minute (giving him a very legitimate gripe), but he doesn't go either?  So he's easily out a couple grand, between flight, hotel and theme park tickets.  Why didn't he just invite Brodie to go with him at that point?

-The character Julie Dwyer is mentioned both in Clerks and Mallrats as having died the previous day of an embolism while swimming in a pool.  Which means both films take place the same day.  Which doesn't make sense since Jay and Silent Bob spend all day in Clerks hanging out at the Quick Stop and all day in Mallrats hanging out at the mall.  This is a paradox, unless this is supposed to be a parallel universe.

So yeah, Mallrats is roughly a guilty pleasure.  Parts of it still make me laugh, parts of it kinda make me cringe.  Of the six View Askewniverse films I'd rank Mallrats and Jay & Silent Bob Strike Back at the bottom.  They're both "check your brain at the door" kinda comedies, where the other four have some dramatic and/or conceptual meat behind them.  Jason Lee was easily the best thing to come out of this film, as he'd steal the show again in Chasing Amy and turn in another fine performance in Dogma.  Kevin Smith should cast him as a major character again when he resumes making funny movies.