Unless you were under a rock for the last two years, you know that the rocket-armed,  gorgeous quarterback of the New England Patriots, Tom Brady, was railroaded by the very league for which he plays. The NFL decided that for the first time EVER, air leaving footballs due to science was a nefarious plot that was planned by the dastardly Brady and a few dinks in the locker room. The NFL leaked false reports for months, never bothered correcting them, and dragged Brady and his Hall of Fame reputation through the mud. The whole time, the NFL kept up with the lie that his was all for the “integrity of the game” being spouted from Lord Goodell’s weird, pursed lips.


So the precedent is now set. The punishment for deflation of footballs is four games, a million-dollar fine, and loss of a 1st and 4th round pick. Got it.

BUT HOLD THE FUCK ON. Yesterday, it was reported by Fox’s Jay Glazer that the Giants had informed the NFL that they had suspected the Pittsburgh Steelers of playing with deflated footballs. OH YEAH, IT’S ABOUT TO GET GOOD, RIGHT!!?!?!? Goodell has to go all scorched earth on those cheaters from Pittsburgh now, right? Mike Tomlin’s legacy forever tainted! Big Ben is a huge cheater and he should be suspended! What a scumbag! All the national news outlets have definitely stopped talking about our Head Cheeto-Elect to talk about this awful, terrible news, right? Has Mark Brunell bought more Kleenix?!?!?!


Nope. None of that happened.  Within minutes, the NFL refuted the report. They have yet to refute Mort's incorrect 11 of 12 report from over a year ago. 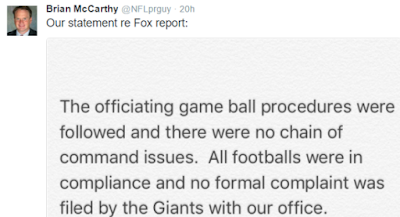 BRADY & THE PATRIOTS: Evil dirtbags. Monster criminal masterminds. Related to both Voldemort and The Emperor. Also, seen pushing kids into mud holes and stealing their bikes.


Let me wrap my head around this. The Giants testing the balls on their sidelines and then sending those balls to the office in NY do not constitute a formal complaint...so I have no idea what a formal complaint is (Also, testing the balls on the sidelines is tampering, and the Giants should be punished, as should the Colts in the original farce as they admitted to the same.).

It's a JOKE. Brady was drilled at a press conference like he was part of the Kennedy assassination, Big Ben goes up there, says he was actually playing with Nerf balls, and they all laugh it off. For Christ’s sake, a grown man CRIED ON AIR about air in footballs when it came to Brady. But now, nope, no big deal. The NFL has shown with this non-investigation that deflated footballs were not the real crime. The real crime was being successful. The real crime was Brady and the Patriots 15-year reign of terror on the NFL. The real crime was other NFL owners being sick of getting their asses kicked by TB12 and company. It would be funny if it weren’t so ridiculous.

Posted by Justin Enuffa Ballard at 10:46 AM