WWE reached the End of the Line last night at their final 2016 PPV Roadblock, and while nothing grabbed me by the throat and shook, it was a perfectly solid way to spend an evening, given that it was an unnecessary December PPV event.  The six matches ranged from very good to total throwaway but nothing on the show was offensive and most of the booking was well-executed.  Let's take the deep dive, shall we?

The show opened with a hotly contested, loads-of-fun Tag Title match, as The New Day hoped to extend their new longevity record against Sheamus & Cesaro.  This was furiously paced with lots of suspenseful near-falls and great attempts by both teams to get a cheap advantage.  The New Day tried to use their superior numbers to pick up the win but Sheamus & Cesaro anticipated all of it.  The finish was superbly booked, as Sheamus went to make a tag and Cesaro deliberately whiffed on it but ran into the ring anyway, duping Kofi into thinking he was now the legal man.  Kofi hit him with Trouble in Paradise and went for the cover but Sheamus, still the legal man, dove on top of Kofi for a surprise win.  The New Day sold the loss of the belts perfectly, hammering home the devastation of being dethroned.  This is how you elevate a title. 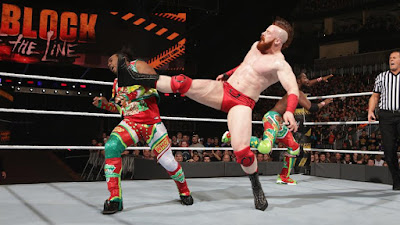 Match #2 was the Sami Zayn 10-minute challenge against Braun Strowman, and while I was not a fan of this concept at all, the execution was decent.  Zayn showed some offense for the first few minutes before being decimated by Strowman's power.  Zayn took a tame but convincing beating (some blood here would've helped tell the story immensely) before Mick Foley showed up and threatened to throw in the towel.  Zayn then came back and eventually nailed Strowman with the Helluva Kick to go the distance.  I'm sure this feud will continue and Strowman will get his decisive win back.  Zayn needs to be in Title contention.

Seth Rollins vs. Chris Jericho was next, in a match that was hurt considerably by a pretty dull crowd (Pittsburgh's fans seemed very disengaged all night after the opening match), but was technically just fine.  They got 17 minutes and put together a technically very good bout with fun back-and-forth action.  Nothing at all wrong with the match, it just wasn't a classic like it should've been.  Kevin Owens attempted to interfere on Jericho's behalf but it backfired and Rollins got the win.  Jericho then sold disgust with Owens. 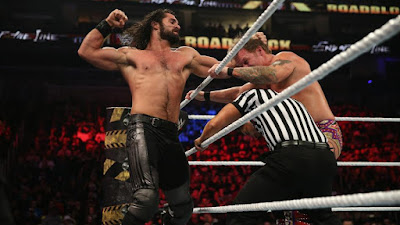 The worst match of the night was the Cruiserweight Title match.  They only got six minutes, the fans didn't care at all, and the action was just sorta there.  I don't know what needs to happen with this division but something does, pronto.  Fortunately after Rich Swann retained the belt, Neville showed up and beat the piss out of him and TJ Perkins.  So at least this division now has a clear antagonist and Neville finally has something to do.  It's the small victories....

The standout match of the night, not surprisingly, was Sasha vs. Charlotte for the Women's Title.  This Iron Man match had weight, drama, intensity, and a good story.  It had a few flaws too, but the match was good enough that they can be forgiven.  I loved the early grappling, I loved that there were no falls until 19 minutes in, I loved Sasha's resiliency and Charlotte's desperation.  I did not love that Sasha gave up the tying fall with only two seconds to spare, after Charlotte spent nearly five minutes destroying her knee.  John Cena once beat Randy Orton in an Iron Man match in similar fashion.  I get that when the pain becomes too intense you aren't thinking logically, and realistically Sasha had a 2-1 lead at that point anyway and figured she'd retain via a draw.  But two seconds?  What really should've happened is Charlotte should've used a chair late in the match to wreck Sasha's leg, then Sasha could've tapped with like 20 seconds left, and the clock would've run out as both women recovered.  Then Charlotte would've clearly tied up the match due to heel tactics.  Anyway, the overtime period was great; Sasha got a really awful bloody nose which added to the drama and brought to mind Steve Austin vs. Bret Hart.  After nearly mounting a comeback, Sasha fell prey to the Figure 8 again and finally tapped to drop the Title to Charlotte for the third time.  This certainly was an unusual feud, with six title changes.  Not sure what happens now.  Charlotte vs. Bayley at WrestleMania?  Sasha vs. Nia Jax?  Anyway I'd rate this gritty, old-school match roughly ****, and really would've liked to see it close the show. 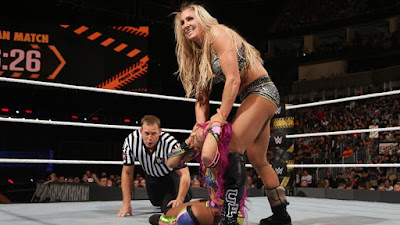 The actual main event went to the rather anticlimactic Kevin Owens vs. Roman Reigns.  After some decent brawling early on, the bout settled a bit too long into the Owens headlock spot before ramping up again.  They did add some entertaining bells and whistles, such as the frog splash across the announce table.  But once again the crowd seemed pretty uninterested.  The finish here came when Owens failed to put Reigns away, and Jericho ran into the ring and attacked Owens, drawing a disqualification.  I did like this booking choice.  Jericho tagged his buddy, presenting the appearance of dissension, but then revealed it was all a ruse to save Owens' title AND give him a win.  Reigns and Seth Rollins were livid and put both guys through tables, a la The Shield.  If only RAW's top two babyfaces were more well-liked. 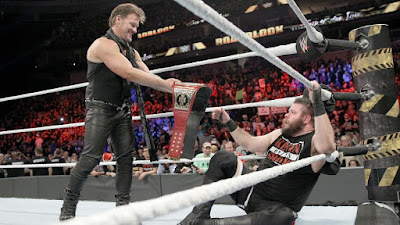 So the RAW product is definitely suffering from a lack of fan enthusiasm, largely due to Vince's inability to present likable babyfaces who actually win matches.  I don't know when he lost sight of what makes people cheer a wrestler, but it's been gone for a while now.  The fans will never like Reigns unless he goes through a great heel run first, and Seth Rollins hasn't been presented as someone the fans should actually identify with.  He's just an angry dude who got fucked over.  Rollins needs a soul-baring type of promo to turn the corner with this new character.  Reigns needs to become a villainous killing machine so he seems cool again.

But overall this show was perfectly solid, continuing the pattern of the split-brand PPVs:  RAW has the stronger roster and thus better overall PPVs, but Smackdown has better talent at the top and you're much more likely to see a Match of the Year contender on the blue PPVs.

Best Match: Sasha vs. Charlotte
Worst Match: Swann vs. Kendrick vs. Perkins
What I'd Change: Put the Iron Man match last and tweak the booking so Charlotte had to cheat to win.
Most Disappointing Match: Probably Rollins vs. Jericho, but it was fine
Most Pleasant Surprise: How good the Tag Title match was
Overall Rating: 7/10
Posted by Justin Enuffa Ballard at 1:13 PM