For the second year in a row the wrong guy wins the Rumble match, and WWE eats a plateful of shit...


For the second straight year Vince McMahon's stubborn tone-deafness backfired on him at the Royal Rumble.  The egregiousness of the booking was even worse than 2014's Rumble, and here's why: at least in 2014 an argument could be made that WWE didn't realize how badly Batista's comeback and Rumble win would be received.  I mean, those of us with the capacity for logical thought knew Batista's return wasn't going to galvanize the fanbase like Vince hoped, and that 2014 was clearly Daniel Bryan's time.  But WWE realized they'd made a mistake and worked diligently to correct it, and eventually we got the WrestleMania we deserved.  But WWE learned nothing from this fiasco apparently, as you'll see.

Before I go on any further about this turd of a Rumble match, let's recap the undercard.

The Ascension experiment fell on its face out of the gate, as the fans didn't buy these two generic-looking Indie-style midcarders as the second coming of the Road Warriors.  But no matter, they still got a decisive win over The New Age Outlaws.  This stunk.  Moving on.

Another tag match followed, this one a WWE Tag Title match between The Usos and Team Mizdow.  Not bad but not much more than a run-of-the-mill RAW match.

Third time's the charm?  Not so much.  The Bella Twins faced Paige & Natalya in the third consecutive tag match on this show, and while probably the best bout so far, this also wasn't much to tell the grandkids about.

Amazingly, a memorable and awesome match broke out in the semi-main slot, as WWE Champ Brock Lesnar defended against John Cena and Seth Rollins.  Man, what a stunningly worked match.  All three guys wrestled like this was the main event of WrestleMania, packing the bout with non-stop action, near-falls, and high spots.  Lesnar dominated early with German suplexes galore (including a double GS on Rollins flunkies Jamie Noble and Joey Mercury) before being put through a table by Rollins mid-match.  Rollins would then turn in a career performance, nearly defeating John Cena for the Title if not for Lesnar's third-act comeback.  Lesnar finally finished off Rollins by countering a Curb Stomp with an F5, retaining the Title and capping off his best match since SummerSlam 2013.  One of the best Triple Threats I've ever seen. 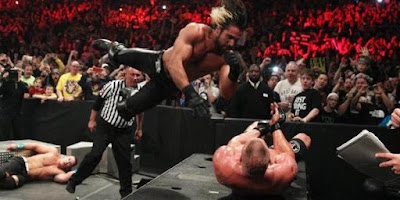 Had the Rumble match been anywhere near as good as the three-way this PPV would've been saved.  Alas it wasn't good.  At all.
The booking of the annual 30-man match was so horrid and nonsensical it defied logic.  Bray Wyatt, who lasted nearly 47 minutes, was the only guy to come out of this match looking stronger than he went in.  Aside from eventual winner Roman Reigns everyone else looked worse (and Reigns gained no new fans here I assure you).  Even crowd favorites Daniel Bryan, Dean Ambrose, and Dolph Ziggler were treated like afterthoughts, not one of them having spent more than 11 minutes in the ring.  The final four actually included 40-plussers Kane and the Big Show, who dominated just about everyone the crowd cared about.  What a fucking depressing Rumble match.  After being tossed by Reigns, Big Show and Kane doubleteamed the former Shield member only for The Rock to run to his rescue.  Rusev (who had slid under the ropes to the outside) tried to take advantage but Reigns ejected him as well, winning the match to one of the angriest live crowd reactions I've ever seen.  That Philly crowd HATED this match, to the point that The Rock's endorsement of Reigns actually drew boos for Mr. Johnson.  WWE clearly new full well the live audience would turn on Reigns, hence why they flew The Rock in for damage control.  But even with The Rock's return (which made zero sense and felt totally contrived), the crowd shat all over Reigns and started cheering Rusev at the end!  Imagine that, WWE actively pushing their handpicked new babyface star resulted in the live fans cheering an anti-American foreigner instead.  Amazing.


The issue here isn't even that Reigns won the match.  Obviously it was a mistake, but it's what we were all expecting.  What made this such a wretched match is how the babyfaces who were actually over - Daniel Bryan, Dean Ambrose and Dolph Ziggler - were presented like total throwaway participants and eliminated unceremoniously without a strong showing.  Bryan entered at number ten and lasted only ten minutes, being tossed less than halfway through the match.  WWE had the chance to tell a great story of redemption, or even attempted redemption that fell just short of the mark.  But instead they treated Bryan like a common midcarder who had no chance of winning, and the crowd lost all interest in the second half of the match.  The Royal Rumble is supposed to be one of the most fun bouts of the entire year, and for the second straight year WWE turned it into a massive chore to sit through, (Christ, 2014's Rumble was at least a good match up until the ending - this one wasn't even particularly entertaining).

Thanks to back-to-back WrestleMania seasons where WWE's booking was defiantly out of touch with what its audience wanted, the Royal Rumble became one of the worst events on the calendar.  I'd call the 2015 Rumble match the worst in its near thirty-year history, and the event surrounding it wasn't much better.  Were it not for the amazing WWE Title match this event would be high on my All-Time Worst PPVs list.

Best Match: Brock Lesnar vs. John Cena vs. Seth Rollins - everything else was shite
Worst Match: The Rumble
What I'd Change: Without changing the result, I'd have booked Bryan to almost run the table before being eliminated by Rusev (or someone with whom Bryan could feud until 'Mania), so the fans' anger is deflected away from Reigns.  Then have Reigns toss out the guy who tossed out their favorite, avenging Bryan's defeat.  That would at least have possibly given Reigns some mild crowd support instead of him incurring their merciless wrath.  Also why not bring Orton back here to add some star power to the Rumble match?
Most Disappointing Match: Obviously the Rumble
Most Pleasant Surprise: Just how good the WWE Title match was
Overall Rating: 3/10 just for the Triple Threat
Better than WrestleMania 31, SummerSlam '15, and/or Survivor Series 2015? - No, Christ no, and not really