And we're almost done with our historical Rumble journey....

2018 kicked off with a helluva good PPV, as WWE continued its rediscovery of how to put on a fun Royal Rumble.  TWO in fact.  For a while there the Rumble had become one of my least favorite events on their calendar, but by 2018 it had fully returned to form, with one of the best examples of the gimmick, plus an historic first women's edition.  There was nary a bad match on the main card, both Rumbles delivered, there were memorable moments abound, lots of fun surprise entrants, a clear direction for WrestleMania, and a monumental debut to end the show.  Hard to ask much more of a Rumble PPV.

First up, oddly, was the WWE Title match.  AJ Styles defended against Kevin Owens and Sami Zayn, in a crisply worked 16-minute match.  Nothing spectacular here, but the three of them worked well together and AJ even got to bust out his moonsault-reverse DDT combo (the first WWE instance of this move I remember seeing).  Styles retained after countering an Owens pop-up powerbomb into a roll-up, but Owens and Zayn protested since Owens technically hadn't tagged into the match.  Solid opener. 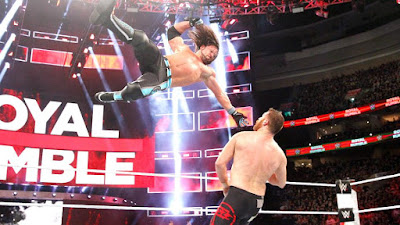 Next was the Smackdown Tag Title match (SD kinda got shafted with this lineup; both of their bouts went on first), as The Usos defended against Chad Gable & Shelton Benjamin.  Energetic, fast-paced and well-booked, with a shocking two straight falls for Jimmy and Jey, this was a fine undercard match.  I liked that the first fall was long and the second fall was surprisingly short - it was realistic and defied the typical structure for a 2/3 Falls match.

The men's Royal Rumble was third out of six, which was pretty baffling until the end of the show when it was made clear why.  I daresay this was the best Rumble match since 2004.  The booking of this match was predictable in a good way; everyone who should've gotten to shine did.  The final five ended up being the five most plausible winners.  Finn Balor entered at number 2 and made the final four, having lasted 57+ minutes.  And of course Shinsuke Nakamura got his WWE career-defining moment by outlasting both John Cena and Roman Reigns to win the whole thing (after 44 minutes of in-ring time).   This is how you book a Royal Rumble match in 2018.  Other notes: The returning Rey Mysterio looked better than he had in ten years, Andrade Almas and Adam Cole both had good showings and it was great to see the NXT guests not geeked out on the main roster for a change (Almas's main roster career is another matter unfortunately).  Anyway, this was a fantastic Rumble match that ranks up there with the 1992 and 2004 editions.  WWE's follow-up on Nak's big moment of course sucked, as he failed to dethrone AJ Styles for the title at four consecutive shows, two of those matches going to a draw.  But for one night it looked like Nak was poised to break the glass ceiling. 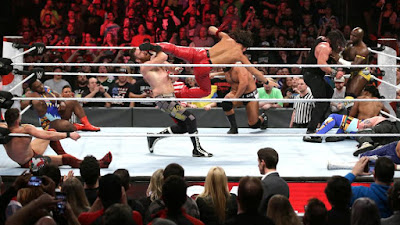 The match given the unenviable post-Rumble spot was Seth Rollins and Jason Jordan vs. The Bar.  This was easily the weakest match on the show and since Jason Jordan was injured and still hasn't returned, the whole angle was pointless, but this was inoffensive.  And The Bar regained the straps as they should have.  So no complaints there.
The Universal Title match was one of those bouts I knew I shouldn't have enjoyed as much as I did.  But goddamn this was a helluva good car wreck match.  They cut right to the chase and brought in the plunder, and the three monsters proceeded to beat the shit out of each other.  I'd say Kane's involvement in this match was a bit pointless but he took some big bumps and was clearly there to take the fall so Strowman didn't have to.  Brock and Braun worked stiffly with each other, Braun nailing Brock with a knee and Brock throwing a legit punch to Braun's head.  All three announce tables were destroyed and Braun even got buried under one of them.  Just pure carnage from start to finish.  Lesnar came back from two Strowman powerslams (thanks to Kane interference) before ejecting Braun from the ring and F5ing Kane for the win.  This was about as good a match as we could expect from these three and the bells & whistles worked to a tee. 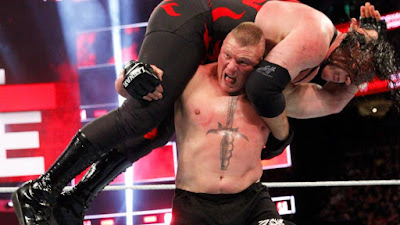 History was made on this PPV as the women's Rumble got to close the show.  I had my doubts about this decision going in, particularly since the men's match was so strong, but WWE pulled this off quite well.  The women's match, while not quite at the same level, was nevertheless a ton of fun and featured numerous well-respected female stars of the past to supplement the current roster.  Lita, Trish, Torrie, Beth, and Michelle all looked very good here without overshadowing the current generation of stars, and it was fun to see them all again.  We also got two NXT cameos in Ember Moon and Kairi Sane, both of whom came off strong despite not much ring time.  As with the men's Rumble this was smartly booked and the exact right person went over, multiple other participants were booked strong in defeat, and one of the starters got to be the long man.  The only complaints about this match were that several of the participants spent too much time selling injuries outside the ring, and some of the eliminations looked weak due to the comparative height of the ropes.  Asuka winning was the right move and her subsequent WrestleMania match with Charlotte was presented as a big fight (Asuka's streak sadly ended there but her career recovered by year's end).  Another very good Rumble match. 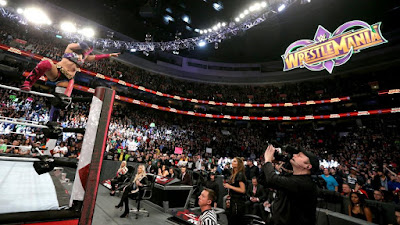 Ronda Rousey made her big debut after the match ended, pointing to the Mania sign and telling Asuka and the two women's champs, "See you there."  This kicked off Ronda's hugely successful WWE run and ended the show on a major high note.

The 2018 Royal Rumble ranks very near the top of this event's 30-year history.  We got one of the best-ever Rumble matches followed by one of the most memorable, plus three perfectly good undercard matches and one that was weak but inoffensive.  This show is among the top two or three Rumble cards.

Best Match: Men's Rumble
Worst Match: Rollins/Jordan vs. The Bar by default
What I'd Change: I might put the Men's Rumble fourth on the card with only the Lesnar match in between.  Also Asuka and Sasha should've been the final two in the women's match.
Most Disappointing Match: Nothing really disappointed
Most Pleasant Surprise: That the show went pretty much exactly as it should have.  They didn't overthink it or try to swerve us.
Overall Rating: 9/10