The 2020 Royal Rumble served as the coronation of Drew McIntyre, over a decade after his WWE debut.  In that regard it was a success, if Drew as the top babyface is your cup of tea.  I was underwhelmed..... 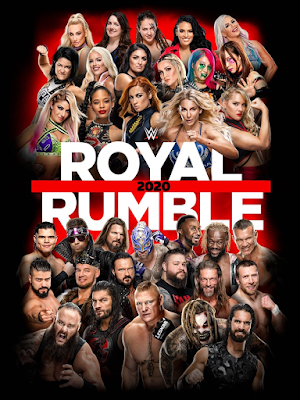 The show kicked off with an overlong bells & whistles brawl between Roman Reigns and Baron Corbin. This pairing has never done anything for me and this was no different. They fought in the ring for several minutes and then brawled all around the stadium; since it’s such a big venue this undoubtedly helped bloat the running time. Near the end of the match Roman locked Corbin in a porto-crapper and tipped it over. Uhhh, okay. Then both guys ended up on top of a dugout, where Reigns finished him with the punch/spear combo. At least the finish was fun. This didn’t need more than 15 minutes but it got 21. Shane vs. Miz at Mania 35 was more entertaining.

The women’s Rumble was shockingly early in the lineup. This was definitely better than 2019’s women’s Rumble but not a great one, and the wrong woman won.  This should've been Shayna Baszler's big moment given her buildup the previous few months.  On the plus side though, Shayna was booked like a monster for her four minutes, and Bianca Belair looked like a huge star in her 33-minute run. Each woman tossed out 8. Other than that we got a helluva run from Beth Phoenix, who withstood a bad cut on the back of her head and made it to the final three after tossing out her bestie Natalya (payback for 2018), and a lot of overly quick eliminations of NXT stars.  It came down to Shayna vs. Charlotte, and rather than go the logical route set up at Survivor Series they had Charlotte head scissor Shayna over the ropes to win. Charlotte would go on to challenge Rhea Ripley for the NXT Title, a match I was really excited about until Charlotte got to beat her, thus derailing Ripley's monster push.  Well done, guys.  This Rumble was fine but I didn’t like the result at all, and history agrees with me.
Participants: Alexa Bliss, Bianca Belair, Mighty Molly, Nikki Cross, Lana, Mercedes Martinez, Liv Morgan, Mandy Rose, Candice LaRae, Sonya Deville, Kairi Sane, Mia Yim, Dana Brooke, Tamina, Dakota Kai, Chelsea Green, Charlotte Flair, Naomi, Beth Phoenix, Toni Storm, Kelly Kelly, Sarah Logan, Natalya, Xia Li, Zelina Vega, Shotzi Blackheart, Carmella, Tegan Nox, Santina Marella, Shayna Baszler
Final Four: Charlotte Flair, Shayna Baszler, Beth Phoenix, Natalya
Long Man: Bianca Belair (35:29) 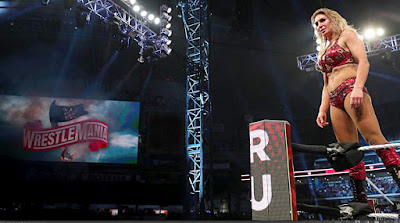 The worst match of the night, though it wasn’t terrible, was Bayley vs. Lacey Evans. This was probably Lacey’s best match up to this point, though that’s saying very little. Bayley controlled the early parts and Lacey made a comeback and attempted a lot of impressive moves. I say attempted because while Lacey is very athletic she’s also very sloppy, and a couple times she came dangerously close to falling on her head. The finish came when Lacey did a moonsault off the ropes but Bayley got her knees up and cradled her, hooking the tights to retain.  Not great.

The show peaked with the next two bouts, starting with Daniel Bryan dragging The Fiend’s best match out of him. This strap match was all about Bryan refusing to back down from the monster heel champion, and while no one going in thought he had much of a chance, he made them believe by the end. Bryan is one of those incredible talents who could be showing off his abilities so much more in NJPW or AEW instead of feuding with cartoon villains. Wyatt whipped the crap out of Bryan for a lot of the match, leaving a network of welts on his easily-marked skin. Bryan took everything and kept getting up, kicking out of Sister Abigail, hitting Wyatt with two running knees and at one point countering the Mandible Claw into a Yes Lock aided by the strap. But Wyatt powered out, no-selling a few strap shots and hitting a Mandible Claw slam for the win. The moratorium on the red spotlight helped this match visually, but it was Bryan’s storytelling that made this.  The Fiend would go on to get squashed by Goldberg for no reason a month later, and Bryan would go on to nothing meaningful for the rest of 2020.  Well done again, guys. 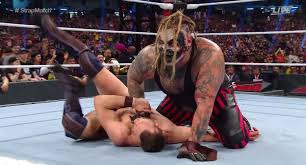 Equally good but in a different way was the long-awaited Becky-Asuka match. While not quite as good as their first outing, this was technically the match of the night. Both women worked really hard and put together an engaging contest. At one point Becky front-suplexed Asuka off the apron to the floor, which Asuka took perfectly. This looked brutal. Becky then hit an Exploder into the dasherboards. Asuka came back with kicks, a German suplex and an Asuka Lock which Becky escaped. Asuka kicked Becky in the head which seemed to knock her out. The ref stopped Asuka from following up so he could check on Becky (which makes no sense), and was about to stop the match when Becky grabbed his leg. Asuka was about to use the green mist but Becky cut her off with a kick and Asuka sprayed it into the air. Becky locked in the Disarmer for the tapout. Really good match as expected.  Ironically Asuka would take up Becky's mantle as the women's face of RAW a few months later when Becky went on maternity leave. 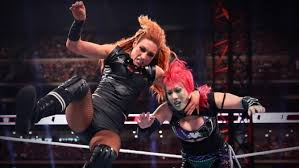 Now for this men’s Rumble. This was well-executed for what they were going for, but I found myself not enjoying it all that much. I get what they were trying to do, but a) it was in service of yet another out-of-nowhere mega-push, b) they took Brock’s dominance way too far and c) they buried numerous valuable talents to that end. We ended up getting half of a real Rumble match, after nearly thirty minutes of watching someone play the video game on Easy Mode.  Brock literally threw the first half of the field out all by himself, and it wasn’t until numbers 15 and 16 that the streak was broken. The first half of the match consisted of Brock easily tossing a guy and then waiting for the next one. John Morrison, Cesaro and Shinsuke Nakamura were made to look like total geeks when they could’ve put jobbers in those spots, or, God forbid, let them stay in and do something. Kofi Kingston, Big E and Rey Mysterio didn’t get much better treatment. Remember when Kofi was the hottest male babyface in the company? Good times. Drew McIntyre entered at #16 and finally put a stop to the madness after Ricochet low-blowed Brock and Drew hit the Claymore Kick to eliminate him. The rest of the match saw the ring fill up with bigger names, including a returning Edge, who got a magnificent pop after nine years on the shelf, and culminating with Seth getting #30 and having his friends help him take out Kevin Owens, Aleister Black and Samoa Joe. Then those three brawled to the back with Seth’s entourage while Roman, Drew, Edge and Orton ganged up on Seth to eliminate him. Edge then tossed Orton, Roman got rid of Edge, and Drew took out Roman to win the whole thing. As a Rumble match it was executed fine, but this wasn’t the Rumble for me.
Participants: Brock Lesnar, Elias, Erick Rowan, Robert Roode, John Morrison, Kofi Kingston, Rey Mysterio, Big E, Cesaro, Shelton Benjamin, Shinsuke Nakamura, MVP, Keith Lee, Braun Strowman, Ricochet, Drew McIntyre, The Miz, AJ Styles, Dolph Ziggler, Karl Anderson, Edge, Baron Corbin, Matt Riddle, Luke Gallows, Randy Orton, Roman Reigns, Kevin Owens, Aleister Black, Samoa Joe, Seth Rollins
Final Four: Drew McIntyre, Roman Reigns, Edge, Randy Orton
Long Man: Drew McIntyre (34:11) 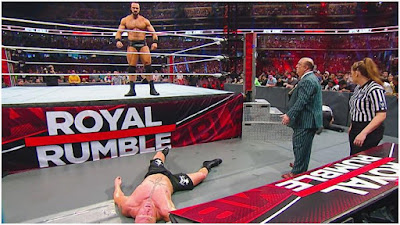 Drew went on to have a pointless four-minute WrestleMania MAIN EVENT against Brock to kick off his lengthy WWE Title run, and while he's done well with what he's been given, I still don't see him as The Guy.  It didn't help that his big main event push came basically out of nowhere after two years of floundering as either Ziggler's muscle, Braun's sidekick, or Roman's whipping boy.  Big payoffs have to be built up or they don't mean anything.