Welcome to another Top Ten Things here at Enuffa.com! 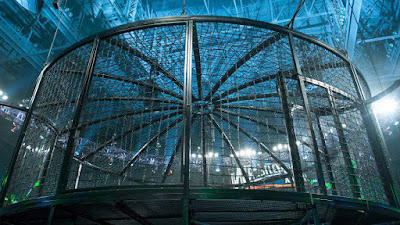 We're days away from the Elimination Chamber PPV, where the WrestleMania lineup could be dramatically reshaped.  For several years this match/PPV served as the final stop on the Road to WrestleMania, and it had a huge impact on the top Title picture.  It seemed in 2015 that the concept was being retired due to logistical problems with hanging the Chamber from the arena ceiling.  But thankfully WWE dusted off this match last year and it's apparently here to stay.

The Elimination Chamber was first introduced in 2002 as an Eric Bischoff creation, combining aspects of Survivor Series, WarGames, and the Royal Rumble into one brutal fight.  Two men would start the match and every few minutes another would enter, until by pin or submission each entrant would be eliminated.  The wrinkle was that the entire ring would be surrounded by a massive chain-cage structure, and all but the first two participants would be trapped in pods until it was time to join the melee.

This is an unpopular opinion, but I considered the first Chamber match a failure.  I found it slow, plodding, awkward, and ultimately counterproductive in creating a strong RAW roster at a time when Smackdown was smoking RAW creatively and in the ratings.  The match was all about the Hunter-Shawn feud, and the other four guys were treated as afterthoughts.  On top of that, no one seemed sure what to do inside this terrifying-but-unfamiliar structure.  Fortunately the kinks were ironed out after the inaugural edition and over the past fourteen years the Chamber has provided numerous classic clusterfucks.  Here now are my ten favorites..... 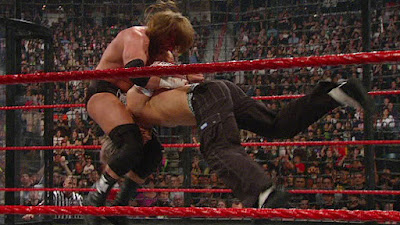 2008's No Way Out PPV began the several-year trend of the Elimination Chamber being used to shape the main event picture for WrestleMania, with two #1 Contender matches determining challengers for each brand.  The RAW Chamber match was easily the superior one, with a stacked lineup, lots of Jericho vs. Michaels action, and a career-elevating performance by Jeff Hardy.  Triple H would outlast the others to earn a WWE Title match against Randy Orton (he'd be joined by John Cena) before capturing the Title at Backlash and taking it to Smackdown in the 2008 Draft. 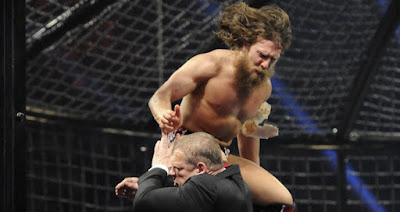 The 2014 Chamber might have had the best pound-for-pound lineup, with five World Champions involved, plus the accomplished Cesaro.  The action was spectacular, with all six participants entering the match before any were eliminated.  The booking toward the end got a bit outlandish, with the Wyatt Family causing Cena's elimination and Korporate Kane assisting with Daniel Bryan's, but it was a highly engaging Chamber match and ended up being Christian's career finale. 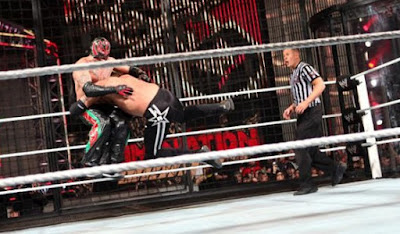 Probably the best-ever Elimination Chamber PPV was the 2011 edition, which included two Chamber bouts on this list.  The first pitted World Champion Edge against five Smackdown challengers, and the match played out like the Edge & Mysterio show.  Edge and Rey-Rey were the first two participants in and carried the action throughout the entire 31-minute running time.  Edge would eventually outlast his former tag partner and defend the Title against Alberto Del Rio in his WrestleMania 27 swan song. 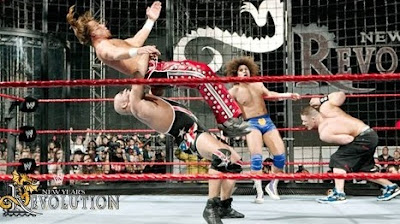 One of the more unusually booked Chamber matches also just happened to be one of the better ones.  John Cena's first WWE Title run climaxed with this violent bout, in which he was the #1 entrant and began to prove his in-ring worth by enduring over 28 minutes to retain.  What's odd about the booking was that Carlito and Chris Masters of all people were the last two eliminated, while Kurt Angle was the first one gone.  Still this was a very exciting Chamber that showcased Cena's burgeoning ability between the ropes and led directly to the first-ever Money in the Bank briefcase cash-in by Edge.  A helluva match followed by an historic moment. 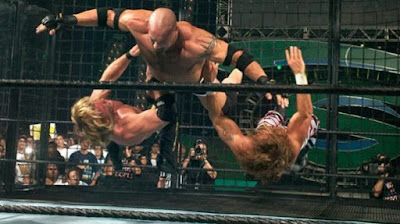 This was one of the most infuriating matches of all time.  The second-ever Chamber match took place at SummerSlam 2003 and featured the only ten-minute stretch during Goldberg's first WWE run when he was used properly.  And then they fucked it all up.  Triple H, suffering from a groin pull, was considered a lock to lose the World Title, and it made perfect sense for it to happen in the Chamber, when he'd have potentially five challengers to fend off.  The bulk of the match was booked brilliantly, with Hunter entering at #5 only to meet a superkick by Shawn Michaels that left him incapacitated for several minutes.  Goldberg, the #6 entrant, then steamrolled everyone in the entire match, eliminating Randy Orton, Shawn Michaels and Chris Jericho in quick succession.  Look, I'm not even a Goldberg fan, but he won me over huge during this match and I couldn't wait to see him murder Hunter and win the strap.  But then WWE booked him like a doofus by having him go to spear Triple H and instead run into a sledgehammer shot that cost him the match.  The groin-injured Hunter walked away still Champion, and Goldberg's aura was severely damaged for the rest of his WWE run (particularly after an extended beatdown by Evolution following the match).  But take out the last thirty seconds or so of this match and it was a streamlined, action-packed thrill ride. 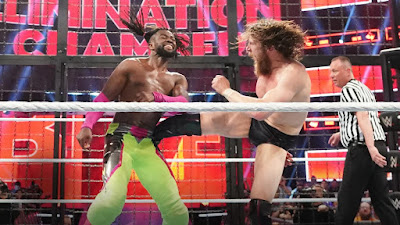 The big story of this match and the months surrounding it was the unexpected rise of Kofi Kingston.  Replacing the injured Mustafa Ali, the underutilized veteran shocked and delighted fans everywhere by nearly winning a gauntlet match he wasn't even supposed to be in, and KofiMania was born.  Fast-forward to this Chamber, where we not only got some great action between former ROH rivals Daniel Bryan and Samoa Joe, we got a crazy Swanton spot from Jeff Hardy onto AJ's back as he lay across the turnbuckles, and of course we got a fantastic finishing sequence as Bryan and Kofi gave us a preview of their future show-stealing WrestleMania match.  Even in a loss, Kofi got a standing ovation from the crowd.  Just a really strong Chamber match featuring some of the most accomplished stars in the company. 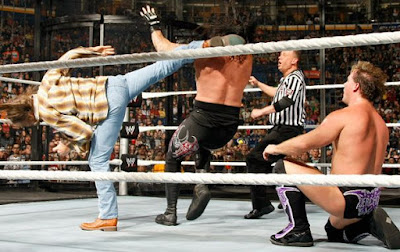 The first-ever Elimination Chamber PPV was main evented by this Smackdown World Championship match.  The Undertaker (who amazingly wrestled the match after being accidentally burned with pyrotechnics) defended his Title against a host of Smackdown stars.  CM Punk stole the first third of the match by eliminating R-Truth and then cutting a Straight Edge Society promo, John Morrison had some tremendous exchanges with Rey Mysterio, and finally it all boiled down to Taker and Jericho.  Taker had the match won but suddenly Shawn Michaels popped up from under the Chamber to superkick Taker and cost him the Title, thus setting up their WrestleMania rematch.  From the entertaining action to the great storyline advancement, this was an excellent Elimination Chamber. 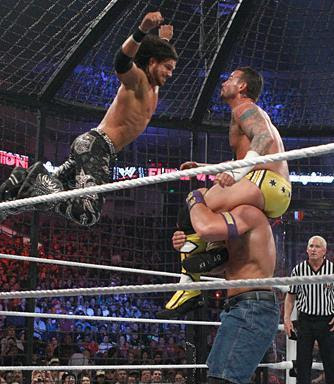 The second Chamber match on the 2011 PPV was this #1 Contender's match.  The Royal Rumble winner that year was Smackdown's Alberto Del Rio, thus RAW needed its own WrestleMania challenger for the Miz's WWE Title.  This bout had some of the best action of any Chamber match, much of it from the uber-athletic John Morrison who infamously scaled the Chamber dome before diving on top of Sheamus to eliminate him.  Another great story thread was the Punk-Orton feud; Punk's pod didn't open properly which allowed Orton to capitalize and eliminate him, but the Anonymous RAW GM ruled that Punk would be allowed back in the match due to the malfunction.  Punk would then re-enter the fray in the #6 spot and take out Orton on his way to nearly winning the entire match.  But it was John Cena who emerged victorious and challenged Miz in one of the most disappointing 'Mania main events in history.  Despite the aftermath though, nothing can take away from this being one of the strongest-ever Chamber bouts. 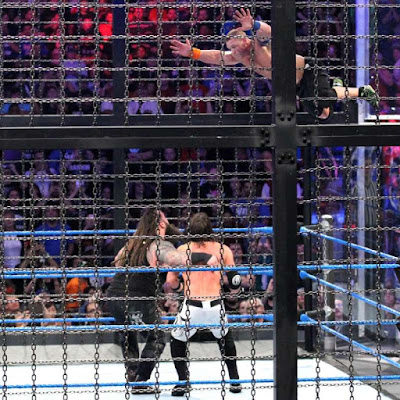 The imposing Chamber structure was retooled for its 2017 return, in order to reduce the weight so newer arenas could support it, and to make the match safer.  While not as aesthetically pleasing as the original configuration, this new version of the Chamber actually lent itself better to creative spots and big moves.  And who better to take advantage than AJ Styles, who absolutely stole the show in this match?  The bout began with AJ and John Cena renewing their rivalry with a balls-to-the-wall opening segment before Dean Ambrose came in to bring some chaos to the match.  From there Wyatt, Corbin and Miz all entered before any eliminations took place.  The match boiled down to Cena, AJ and Wyatt, and Cena was shockingly eliminated by Wyatt, guaranteeing that a new champion would be crowned.  AJ fought gallantly against Wyatt for over five minutes before Wyatt countered a Phenomenal Forearm with Sister Abigail for the win and his first WWE Championship.  While the aftermath of this bout was three months of horrid garbage, the 2017 Chamber would prove one of the best and most exciting of all time. 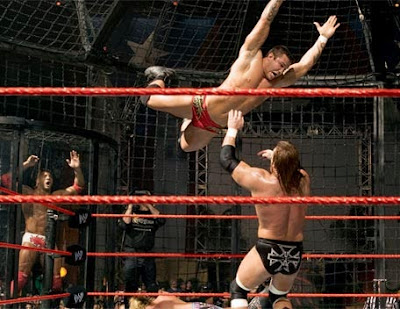 This has to be one of the best matches in history where the setup of it made no sense.  World Champion Triple H had lost the belt in a Triple Threat against Chris Benoit and Edge, when the two Canadians simultaneously forced Hunter to tap out.  Hunter had lost the Title.  But which challenger was the new Champion?  Well that question was impossible to answer, and the logical solution would've been to hold up the Title and have Benoit and Edge fight for it one-on-one.  But instead the Title was vacated and put up for grabs in an Elimination Chamber, pitting the three aforementioned participants against each other, plus three other guys who weren't even involved.  So yeah, this setup was nonsensical, and Edge and Benoit were the first two eliminated.  But goddamn this Chamber match was great.  From the Benoit-Jericho-Edge workrate to the teased dissension between Hunter and Evolution buddy Batista (who was already the hottest babyface in the company despite still officially being a heel), to the continued downward spiral of Randy Orton's initial babyface run, this match had it all, and buckets o' blood.  Oh, and Shawn Michaels as a guest referee.  The match ended with Hunter shoving Orton into Batista, who took an RKO for his trouble and got no help from Hunter during the pin.  Batista then clotheslined Orton, ripening him up for a match/title-winning Pedigree.  While I disagreed with how this was set up, it's still my favorite Chamber match of all time.

Posted by Justin Enuffa Ballard at 8:44 AM