Welcome to a Royal Rumble-themed edition of Top Ten Things, here at Enuffa.com!

Today's TTT is about the long-time WWE event that kicks off the Road to WrestleMania - I'm talking of course about the Royal Rumble!  But this list is gonna be a little different, as I'll be counting down the ten greatest non-Rumble matches in Royal Rumble history!  As you all know, the Rumble itself is only one of the bouts featured on this annual PPV, and the years have brought us some bona fide classics on the show's undercard as well, from WWE Title matches to tag matches to opening contests.  So let's take a closer look.... 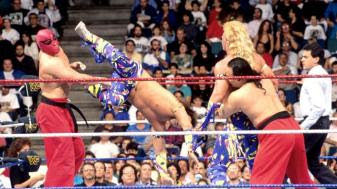 The 1991 Rumble was the first WWF PPV I ever ordered, and while the overall show disappointed me terribly, the night began with an absolutely killer tag match - The Rockers vs. The Orient Express.  I know on paper that doesn't sound mindblowing, but trust me.  This was nineteen minutes of just spectacular action, and I think this was the moment when I really started to appreciate The Rockers, Shawn in particular.  I'd go so far as to call this the 1991 Match of the Year.  I shit you not. 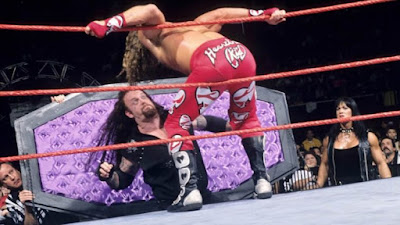 The '98 event was mostly about building up Steve Austin for his impending WWF Title run, and reshaping the WWF as the company with Attitude.  But the non-Rumble main event actually stole the show as natural adversaries Shawn and Taker delivered yet another classic brawl, this time in a Casket Match.  Full of ingenious, brutal spots (including a career-halting back bump by Shawn onto the casket), this match easily put all other Casket Matches to shame and culminated in the memorable visual of Taker's evil brother Kane locking Taker inside and setting the box on fire. 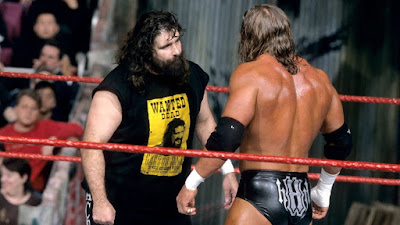 2000 was the year the WWF began firing on all cylinders, and that year's Royal Rumble really set the tone.  The semi-main of this show was a WWF Title Street Fight between new heel Champion Triple H, whose main event run had thus far been shaky at best, and the deranged, violent Cactus Jack.  Much as he had done to establish The Rock as a main event heel in 1999, Mick Foley went above and beyond to cement Triple H as a new headliner worthy of carrying the company into the next decade.  Triple H himself proved he was more than just a cowardly heel Champion by taking vast sums of punishment over the course of this 27-minute bout.  This match featured one of the more grotesque endings I've seen, as Foley took a Pedigree face-first onto a pile of thumbtacks.  This was the match where I became a full-on Triple H fan (until mid-2002 that is).  Also a Match of the Year candidate (though I think their Hell in a Cell match at No Way Out was even better). 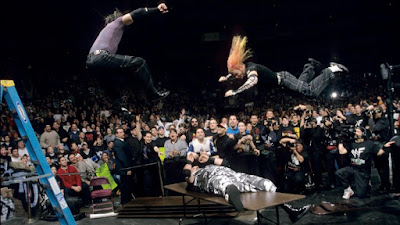 The 2000 Rumble featured a second (and very unlikely) Match of the Year candidate, as The Hardy Boyz faced The Dudley Boyz in the first-ever Tables Match.  These two teams cut the most blistering pace I'd ever seen, assembling a dizzying array of death-defying high spots which climaxed with Jeff Hardy performing a Swanton off the loge entranceway onto Bubba Ray, and through two tables.  This match would more or less be the prototype for the TLC series. 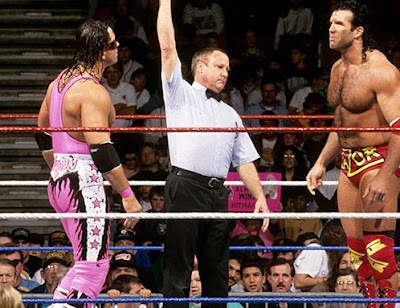 The 1993 Rumble suffered from a serious dearth of top stars, but WWF Champion Bret Hart helped make this event memorable in his Title defense against Razor Ramon, in one of the best matches of 1993.  Bret and Razor gelled superbly and told an excellent bully vs. scrappy hero story.  One of my favorite spots saw Razor whip Bret toward the turnbuckles, with Bret collapsing on the way over and smashing ribs-first into the ring post below the bottom rope.  After nearly 18 minutes Bret would retain the Title by executing the Sharpshooter from a prone position.  A creative finish to a spectacular Title match. 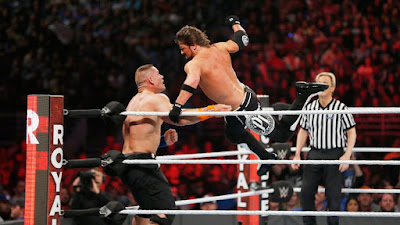 AJ Styles is one of the amazing WWE success stories of the decade.  After years of delivering blowout matches in TNA, Ring of Honor and NJPW, he finally made the jump to WWE, and his fans everywhere feared the worst.  WWE is notorious for not booking imported stars very well, but AJ won over his new employers almost immediately, and by the end of 2016 he'd delivered classic bouts against Roman Reigns, Dean Ambrose and John Cena, and snared his first WWE Championship.  The final and best match of his trilogy with Cena took place at the 2017 Rumble, for said title, and these two blew the roof of the Alamodome with a 24-minute masterpiece that saw Cena hit consecutive AAs to regain the WWE Title and tie Ric Flair's 16x record. 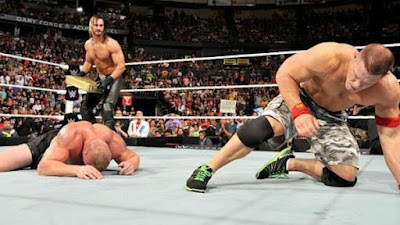 The 2015 Rumble PPV was unquestionably one of the worst in the event's history, with an abysmal Rumble match booked by an out-of-touch writing team.  Amazingly though, a memorable and awesome WWE Title match broke out in the semi-main slot, as Champion Brock Lesnar defended the strap against John Cena and Seth Rollins in a Triple Threat.  Man, what a stunningly worked match.  All three guys wrestled like this was the main event of WrestleMania, packing the bout with non-stop action, near-falls, and high spots.  Lesnar dominated early with German suplexes galore (including a double GS on Rollins flunkies Jamie Noble and Joey Mercury) before being put through a table by Rollins mid-match.  Rollins would then turn in a career performance, nearly defeating John Cena for the Title if not for Lesnar's third-act comeback.  Lesnar finally finished off Rollins by countering a Curb Stomp with an F5, retaining the Title and capping off his best match since SummerSlam 2013.  One of the best Triple Threats I've ever seen. 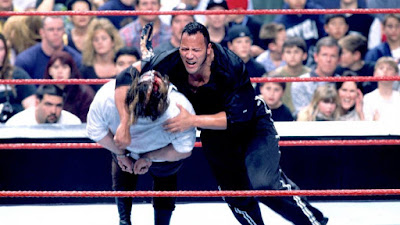 The '99 Rumble card had one and only one classic match, and it was the infamous I Quit match for the WWF Title.  Unlikely new Champion Mankind defended against The Rock, in one of the most brutal brawls I've ever seen.  These two fought all over the arena, working in multiple creative spots, before Rocky handcuffed Mankind and proceeded to bludgeon him with a chair for several minutes.  The agreed-upon scenario of five chair shots became an excessively violent climax featuring eleven unprotected shots to Mick Foley's head.  It made for an amazing Match of the Year candidate, but given what we now know about concussions (and the fact that Foley's kids were in the front row), this match is a little hard to watch now. 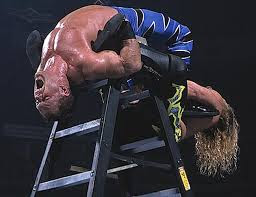 At the 2001 Rumble two long-time friends/rivals delivered a classic Ladder Match for the I-C title.  For Benoit and Jericho this would prove one of their best-ever bouts, as the two worked hard to create inventive spots and establish a gritty, realistic tone throughout.  Aside from a slightly anticlimactic finish, this was probably the best singles Ladder Match since HBK-Razor, and easily one of the best matches of 2001. 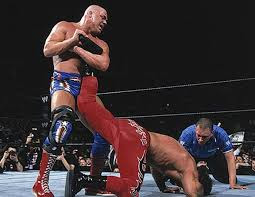 For me the greatest non-Rumble match (and the greatest of all Rumble PPV matches, period) took place in 2003, as WWE Champion Kurt Angle defended against Chris Benoit in a near-perfect bout.  This was 19 minutes of pure excellence as the two ring generals started out slow and built to a fever pitch, showcasing their mat wrestling acumen and ingenious submission reversals.  Angle finally got the win with a modified Ankle Lock, but the Boston crowd was so blown away by this match they gave Benoit a standing ovation.  At the time Benoit was my favorite wrestler and so this was an amazing moment to be a part of.  Obviously the events of June 2007 have tainted this memory, but this is still the best match I've ever witnessed live.


Well there's my list.  As you can see, the Royal Rumble has produced no shortage of noteworthy non-Rumble bouts.  Let's hope this year's edition is able to add to the pool.


Posted by Justin Enuffa Ballard at 8:28 AM