Note: In case you missed my Rise review, click HERE

Dawn of the Planet of the Apes 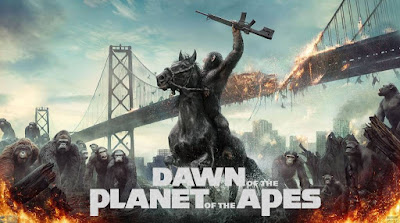 After his initial spark of genius, Rise director Rupert Wyatt was unable to commit to a sequel on the studio's timetable, and was replaced by Matt Reeves of Cloverfield and Let Me In fame.  While I'd be interested in seeing what Wyatt would've done with a sequel, Reeves proved himself a more sure-footed director, brilliantly handling the larger scope of the second (and third) film.

Set ten years after Rise, Dawn begins by showing us the effects of the super-virus Will Rodman accidentally unleashed.  The human population has been decimated, with only a fraction being naturally immune to the disease.  The apes meanwhile have created their own civilization in the redwood forest.  Caesar, now a full adult with a wife and son, has become the apes' exalted, compassionate leader.  After a run-in with a team of human scouts, a power struggle develops between Caesar and another ape called Koba, who still harbors deep hatred of humans for his mistreatment in their labs.  The humans have set up a colony in the city and need access to a hydroelectric dam within the apes' domain so they can restore power.  A very uneasy truce is formed, and Caesar gradually bonds with a few of the humans - Malcolm, his son Alexander, and his second wife Ellie.  But Koba can't accept peace and he engineers a coup, shooting Caesar and framing the humans as an excuse to attack their compound.  Koba and the apes take over the city while Malcolm helps nurse Caesar back to health.  Eventually a violent showdown ensues between the two apes, and Caesar comes to realize that a human-ape war is now unavoidable.

That this synopsis creates so many potential pitfalls but manages to avoid every one of them is nothing short of miraculous.  Dawn could have easily devolved into a trite, manipulative "apes good, humans bad" story, but the script is so deftly written we are able to understand and empathize with the point of view of every major character.  More than that, it establishes parallels between the apes and the humans, illustrating the similarities of the two species.  Caesar is delicately trying to balance his own desire for a peaceful coexistence with his need to protect his race, and Malcolm feels the same way, understanding that the apes are intelligent, reasonable creatures.  On the other side of each coin, Koba is a severely damaged character who is now defined by his hatred of humanity, while the human leader Dreyfus (an always compelling Gary Oldman) is prepared for a violent showdown and will preserve the human race at all costs.  This creates a fascinating parable of sociopolitics and once again the characters and their motivations are front-and-center, while the action sequences are a byproduct.  I also love that the first act of the film contains very little dialogue; the apes communicate primarily through sign language.  As summer blockbusters go, Dawn is a stunningly quiet film.

Dawn takes the incredible dramatic foundation of the Caesar character and expands on it, showing us his maturity and courage as a leader and father but also the violence of which he is capable when wronged.  Koba has also become an amazingly realized, three-dimensional villain, who deeply respects Caesar but whose anger has swallowed him whole and turned him into a monster.  This installment also improves on the original in terms of the human characters; Jason Clarke as Malcolm delivers a heartfelt, relatable performance as a man clinging desperately to the last vestiges of human compassion, wanting above all to reach a peaceful understanding with Caesar.  Gary Oldman plays Dreyfus as an uncertain military leader, a broken man who has lost everything and refuses to let humanity perish on his watch.  These are all well fleshed-out, fascinating personae with believable and understandable motivations, and the film resists the urge to become a sweeping action epic, preferring instead to stay close and intimate with its central characters.

Dawn of the Planet of the Apes is a significant improvement over its impressive predecessor that further fleshes out the Caesar character and his place in this society, while also providing more substantial human characters for him and the other apes to play against.  Matt Reeves' direction is confident and thoughtful, while the pensive, thematic script by Mark Bomback, Rick Jaffa and Amanda Silver defies expectations, grounding the events in complex social and political commentary.  This is how you do a summer sci-fi film.