Well color me shocked.  When I first learned Hollywood was rebooting the Planet of the Apes franchise I groaned, loudly.  Tim Burton's 2001 PotA remake, while boasting incredible makeup effects and a couple decent performances, was largely a disappointing, drivelous mess with a nonsencial reimagining of the original's famous twist ending.  I thought, "Why in the name of all things holy, THE FUCK, do we need more of these movies??"  So I skipped Rise of the Planet of the Apes when it was released.  Then surprisingly I began to hear some pretty great buzz about it, particularly centered on Andy Serkis's motion-capture performance as the main character Caesar.  But I never got around to watching it, and when the sequel Dawn of the Planet of the Apes was released in 2014 I read similarly complimentary things about that film and said to myself, "Justin" I said, "You should get your ass to a TV and watch these movies."  But I still never got around to it.  Finally with the announcement of the third movie War for the Planet of the Apes I said, "Goddammit, just fuckin' DO IT!"

So I did.  And here's what I thought of them, starting with Rise.  Stay tuned for the Dawn and War reviews coming soon....


**Note: I've included SPOILERS for the first two films but not the third**


Rise of the Planet of the Apes 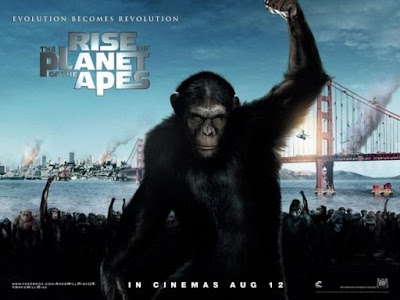 Rise of the Planet of the Apes drew me in almost immediately with the Frankenstein-esque theme of tampering with nature, as well as family loyalty and the exploitation of animals.  Here was a summer "action" film with hardly any action, but a thoughtful focus on the aforementioned concepts and a deeply explored character arc.  Director Rupert Wyatt took the original premise and asked the question "How might we have gotten there?"  Rise presents a practical, real-world explanation of how the Earth could believably be taken over by hyper-intelligent simians, in the same way Batman Begins explored how a man might take to dressing like a giant bat to fight crime (Wyatt himself made that connection in interviews and I happen to agree with him).

This refreshingly small-scope narrative introduces Will Rodman, a promising scientist (James Franco in a solid if unspectacular performance), who experiments on chimps with a powerful Alzheimer's drug, driven by a very personal motivation (His father suffers from the disease).  Rodman secretly adopts a baby chimp whose mother passed onto him the effects of the drug, naming him Caesar.  Caesar shows incredible intelligence at an early age, but as with all domesticated simians, becomes increasingly difficult to control as he matures.  A violent incident with a neighbor leads to Caesar being sent to an ape sanctuary run by a cruel father-son team, and Caesar becomes a hardened alpha-male, taking over the shelter, learning how to escape, and exposing the other apes to the intelligence-augmenting drug.  This builds to a sensational battle between the super-apes and the authorities, leading to Caesar's army setting up a new civilization in the redwood forest.  Meanwhile the Alzheimer's drug has created a deadly super virus in humans that begins to spread worldwide.

While the human performances in Rise are passably effective, the driving force in the film is Andy Serkis's groundbreaking work as Caesar.  As with his turn as Gollum in Lord of the Rings, Serkis is a revelation here, conveying entirely through facial/body language (and what he calls "digital makeup)" amazingly subtle, tangibly real emotional nuances.  Here is an Oscar-worthy performance with almost no dialogue; we feel every moment of Caesar's growth, suffering, loneliness, and finally triumph.  Had this aspect of the film not delivered, Rise would have fallen apart in a heartbeat.  But both Serkis's acting and the amazingly realistic CG rendering are so effective you forget you're watching an animated character (a phenomenon even more prevalent in the sequels).  And Serkis was just getting warmed up...