In case you missed them, click HERE for Rise and HERE for Dawn


War for the Planet of the Apes 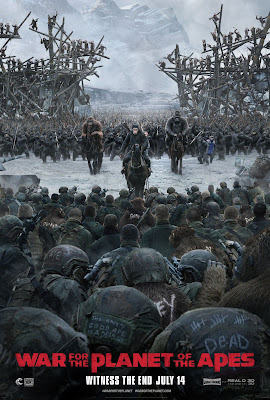 So, ya know how the third movie in a trilogy is always the weakest one, almost without fail?  That's out the window now.  War for the Planet of the Apes is the best, most poignant, most emotionally engaging film in the series, one that moved me almost to tears several times.  It pays homage to such classics as Apocalypse Now and Bridge on the River Kwai, while spectacularly concluding the trilogy and also providing some of the most breathtaking visuals in the entire series.

Director Matt Reeves and screenwriter Mark Bomback returned for the third installment in which Caesar and his apes must prepare for the inevitable war against a human military force hell-bent on exterminating them.  The human contingent is led by a maniacal Colonel (a fantastic, tortured Woody Harrelson, with a nod to Marlon Brando) who has become so dangerous and bloodthirsty he's begun killing off some of his own men and even using a few traitorous apes to do his bidding.  The Colonel wrongs the ape colony (in ways I won't reveal here), prompting Caesar and three of his lieutenants to seek vengeance while the rest of the apes retreat to a new home across the desert.  The story takes multiple unexpected turns and builds to a spectacular climax, but I'll leave you to discover that for yourself.

Suffice it to say, this film is beautiful, poetic, contemplative, exciting.  Andy Serkis once more delivers a note-perfect, deeply subtle mo-cap performance which transcends the special effects and makes the Caesar character as real as nearly any live-action performance you'll ever see.  Another standout is series newcomer Steve Zahn as Bad Ape, a wonderful character who provides most of the film's laughs but is also heartwrenchingly sad.  Like I said, I found parts of this film deeply moving, and Zahn's performance was one of them.  It's high time the Academy started recognizing motion-capture performances at awards time, even if it's a special category.

The effects team has outdone themselves here; these hyper-intelligent apes look so believable they've somehow dug themselves out of the uncanny valley.  For most of War's running time the analytical part of my brain that notices these things was not on alert.  Caesar and his apes have to be considered the most brilliantly realized CG characters in film history.  I often come down hard on the use of CGI, but Matt Reeves and his creative team have figured out the exact right way to utilize the technology.

War for the Planet of the Apes, like Logan earlier this year, is a film that transcends its genre and provides much more than simple summer popcorn entertainment.  This is a profoundly affecting film that will stick with you long after you leave the theater, and it caps off one of the best trilogies of the past thirty years, amazingly managing to top the first two entries.

Posted by Justin Enuffa Ballard at 10:43 AM