Welcome to another edition of Top Ten Things, here at Enuffa.com!  I hope you're ready for some serious nerd nostalgia, because thanks to the fantastic new Netflix series The Toys That Made Us, I have 1980s action figures on the brain.

One episode of said TV series focused on the wonderful 80s toy line known as He-Man and the Masters of the Universe.  Anyone who grew up in that era remembers these larger-than-life figures with impossible musculatures, colorful appearances, pun-driven names, and bizarre quirks/powers.  The first time I saw the original He-Man commercial my brain almost exploded.  These figures looked nothing like any other action figures available at the time.  The characters were so vibrant and otherworldly you couldn't take your eyes off them.  Mattel hit one out of the park with this toy line, scoring record-breaking numbers four or five years in a row, and consistently introducing new series of memorable characters year after year.  A side note: this toy line introduced me to the concept of recycled molds.  Pretty much every figure had the exact same torso mold and initially there were only three sets of arms and legs.  Even as a seven-year-old I noticed this.  But it didn't matter, these toys fucking rocked my nuts off.  A syndicated tie-in cartoon show proved invaluable for selling MOTU figures and for a little while He-Man ruled the action figure market, spawning numerous ripoff lines, my favorite of which were the Remco figures based on obscure DC Comics characters like Warlord and Arak (They even had a disclaimer on the package: For Use with Masters of the Universe action figures).  Personally I wish they'd re-release the original MOTU figures (like they did in 2001) because I'd scoop a bunch of 'em up again.  For my son to play with.  Yeah, that's it.....

Note: Once I got really into wrestling, the He-Man line doubled as my wrestling toys, since they were the perfect size for the WWF toy ring.  Shut up, you did it too....

But which characters were my favorites?  Which of these silly fantasy barbarian toys have stuck with me three-plus decades later?  Let's take a look..... 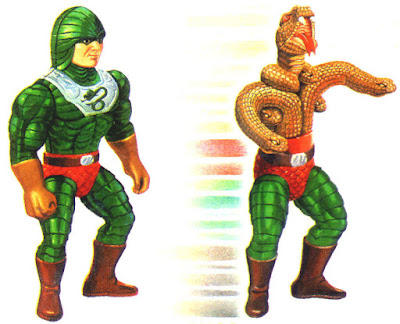 This absurdly over-the-top figure was like He-Man meets Transformers, and the leader of The Snake Men or whatever they were called (an older character named Kobra Khan joined up with this villainous stable as well, like in a pro wrestling angle).  King Hiss looked like a human wearing snake-like armor, but pop off his arm and torso coverings, and GAAAAH, HE'S LITERALLY A GODDAMN SNAKE-MAN!!!  His actual upper body was comprised entirely of snakes (oddly his legs were still humanoid though), creepy enough to unnerve even his fellow bad guys.  I spent so much time transforming this guy from man to snake-man and it was a fairly ingenious gimmick. 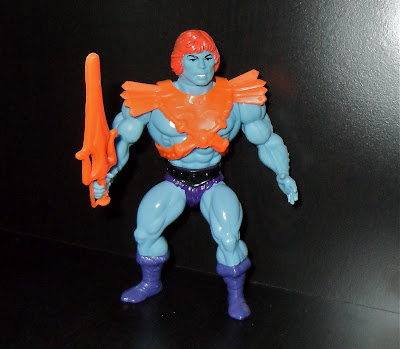 On paper this has to be the stupidest toy ever.  An evil robot that's supposed to be a dead ringer for He-Man, except he has blue skin, Skeletor-style armor, and a visible tape recorder in his chest (courtesy of a sticker).  The idea is that Skeletor built this droid to infiltrate the good guy lair and pimp He-Man's friends for information.  Skeletor must think Team He-Man are either legally blind or just absolute fucking morons.  Who would fall for this trap??  "Whoa, He-Man, you're looking a little pekid, maybe have a nice lie down and some soup?  By the way, here are those Grayskull blueprints you asked for...."  Added to that, Faker was an appallingly flagrant cannibalization of an existing toy, just to sell more toys.  You gotta marvel at Mattel's balls, man.  Regardless of how illogical this character was, the toy looked awesome. 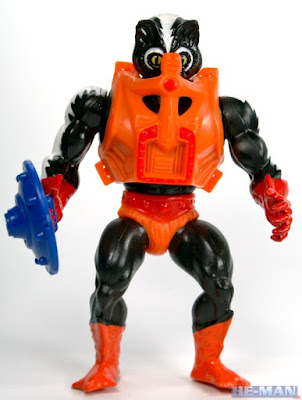 Speaking of blatant mold recycling, in 1984 Mattel took one of the original characters, Mer-Man, painted him black & white, doused him in some kinda putrid-smelling chemical, and repackaged him as a skunk-like character named Stinkor.  Nevermind that a skunk-man wouldn't have webbed feet or fin-like ears, this guy looked boss.  And his armor covered his nose and mouth, implying he smelled so bad even HE couldn't stand it!  I loved the black, white, red and orange color scheme, and the stinky gimmick was brilliant.  Think about it - Mattel got us to buy an action figure that smelled like a goddamn skunk.  Either we're all suckers or Mattel are a buncha Jedi Masters who can bend everyone to their will.  The smell eventually wore off, but Stinkor remained one of my all-time favorite characters. 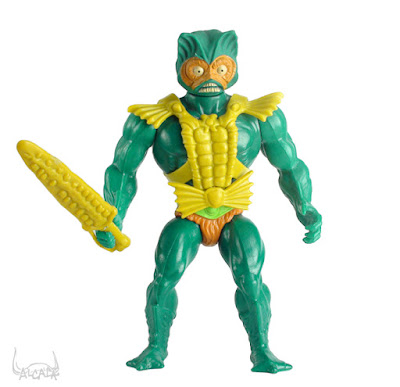 As for Mer-Man, this mold was much more appropriate for an undersea creature, and his scaly armor looked killer.  It did always bug me that his face looked nothing like the cartoon, comics or even the picture on the back of the packaging!  Also they originally were going to call him Sea Man, but changed it for obvious reasons.  Can you imagine one of the heroes saying "Oh no!  Sea Man is all over our base!  Why is Sea Man so hard to get our hands on?   I feel all slimy now that I've touched Sea Man!" 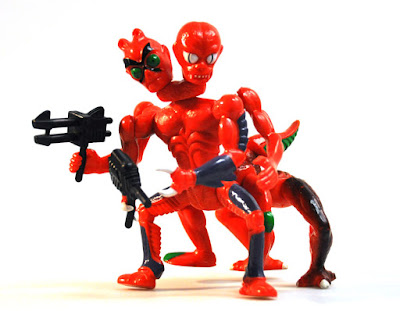 One of the most spectacular toys in the entire line was this 22-piece Lego-esque character you could shape any way you wanted.  Introduced in the She-Ra cartoon, Modulok was a member of Hordak's Evil Horde and looked like some kind of alien/arachnid hybrid.  He had two heads, countless limbs, humanoid hands, claws, and a gun for some reason.  I remember thinking it weird that Modulok had to answer to Hordak, considering he'd have been fairly uncontrollable as a character.  At any rate, this has to be one of the most creative ideas they ever introduced with this toy line. 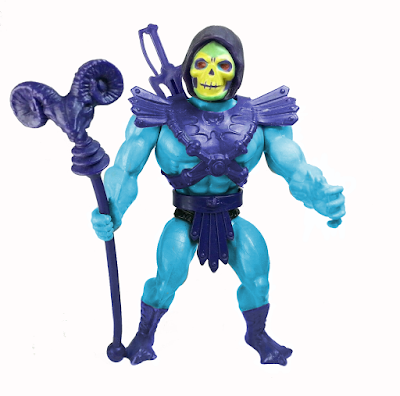 This may seem blasphemous, but Skeletor was never one of my top favorites.  Perhaps it was the buffoonish, grating way they portrayed him in the cartoon, perhaps it was the fact that he had webbed feet for no reason, I dunno.  At any rate, while I never loved this character, there's no denying his significance as the Joker to He-Man's Batman.  Skeletor was the evil mastermind who would stop at nothing to control Castle Grayskull and the Sword of Power.  And considering he was a skeleton he was super buff.  Plus his ram-head staff was pretty kick-ass.  Skeletor is one of the iconic cartoon villains. 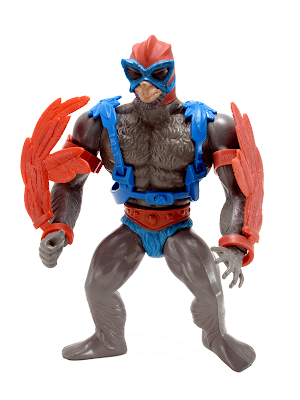 Don't ask me why I love this character so much.  Could be sentimental; I found him in my Christmas stocking in 1982.  Could be that his torso and limbs were identical to Beast-Man's; I freakin' LOVE Beast-Man, as you'll soon see.  Could be that he had mystique about him; the guy could fly but didn't come with any weapons at all.  His ability to fly in and of itself made him a threat.  Also for some reason his armor came in two different color schemes.  At any rate, Stratos was and still is one of my faves.  Fly, you magnificent furry bastard! 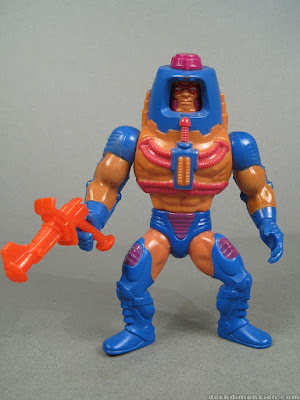 Jeezus what a stupid pun.  The guy has multiple faces, get it?  Wait, it's only three, that's not "many," you assholes!  He should've been called Few Faces.  That's still two more than everyone else has.  Nothing to sneeze at.  Anyway, Man-E Faces was the first known action figure with multiple personality disorder.  He could either be a human, a robot, or a monster, and his personality changed depending on which face he was showing at the time.  How that makes any sense I don't pretend to know.  He was released around the same time as another character with a spinning face gimmick, Tri-Clops, who could change just his eye.  What the hell does that accomplish?  Did his wife pack his angry eyes?  But back to Man-E.  He was a good guy but became uncontrollable when in monster mode, which begs the question - why'd he ever use that one?  And how heavy was that headgear he had to wear?  And was the headgear responsible for the multiple faces?  Again, I don't care for logic when it comes to these stupid figures.  This guy was the balls. 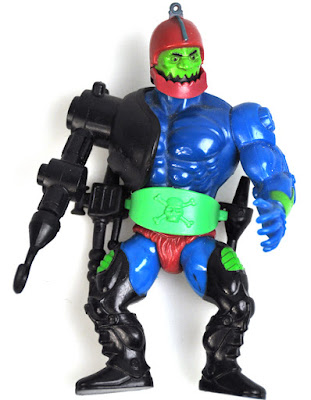 But Trap Jaw was even better.  This guy had a clamping metal jaw like a bear trap.  That alone made him a fearsome foe, but he also had (and it's odd he wasn't named for this feature instead) interchangeable, mechanical right arm attachments.  He could sport a hook (the better to shred the flesh off an enemy's body), a claw (the better to crush bones), or a laser cannon (the better to....shoot lasers...).  On top of that, TJ had a little O-ring on his helmet that, if you could find a piece of string, allowed him to zipline from one place to another.  Trap Jaw was one of the most badass villains in the entire series.  You would be wise to not ever fuck with him. 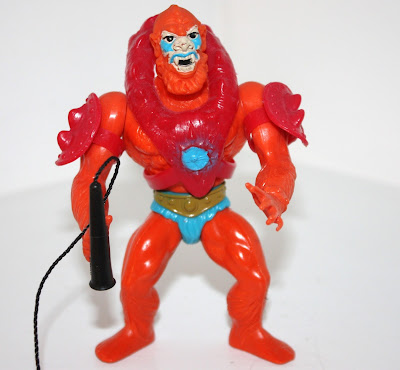 My favorite villain in MOTU was Skeletor's right-hand man (beast).  Built like King Kong but orange, Beastie sported fearsome red spiked armor like a Triceratops and carried a whip.  I imagine Beast Man was in charge of torturing captured prisoners, and if the whip didn't make you talk, he could just maul you like a silverback.  It was Beast Man who initially captured my attention when I saw the earliest TV commercials.  The bright color scheme and unique look made this a must-have toy when it came out, and I believe this was the first He-Man figure I ever owned. 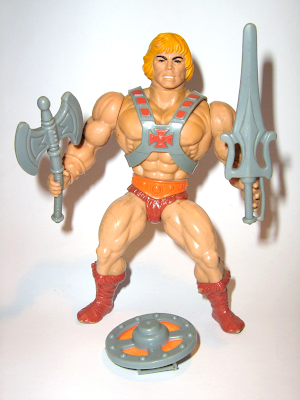 You have to rank the title character at the top.  Everything Masters of the Universe began and ended with this jacked-to-the-gills barbarian wielding a double-edged battle axe.  The guy was built like he ate Arnold Schwarzenegger for three meals a day, and you really believed the moniker of Strongest Man in the Universe.  In fact when the cartoon came out I remember being tremendously disappointed that the animators didn't draw He-Man to be as muscular as the toy.  If it were up to me, the He-Man mold would've been unique to this character so no one else's physique would've been quite as impressive.  Also, the introduction of the Prince Adam alter-ego pissed me off - why does He-Man need an effette secret identity, when everyone knows who he is?  And why was Prince Adam just as physically imposing?  It didn't make sense.  Nevertheless, He-Man was the most impressive-looking action figure in the universe at that time, and he shares territory with Superman and Thor as an indestructible pop culture icon.


Posted by Justin Enuffa Ballard at 8:53 AM