Well folks, the G1 Climax 25 tournament has come and gone, and it is now time for post-G1 depression.  Sigh.....

Anywho, this being my first G1 tourney as a New Japan fan (or as my wife would call me, a "Jeezus, wouldya shut up about New Japan already??"), I thought I'd throw together a quick write-up about the experience. 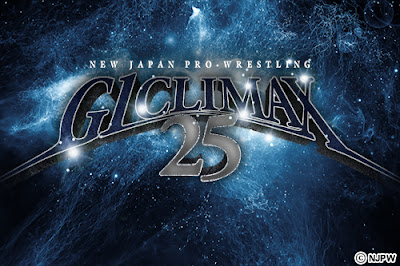 The G1 tournament is of course New Japan's annual round-robin tournament to determine the #1 Contender at next year's WrestleKingdom PPV.  So it's like the Royal Rumble except waaaaaay more intensive.  The number of participants varies year to year, as does the schedule.  Whereas the last few tourneys have consisted of entire cards of G1 matches (which I loved because it meant multiple full shows of excellent singles bouts), the 2015 edition was more spread out to give the guys more time to recover from each match.  This year there were 19 total dates including the Finals, and each "regular season" show only featured five tourney matches from one block at a time.  This layout definitely made it easier to keep up if your goal was to only watch the G1 matches, as the first half of each show consisted of multi-man tag bouts to warm up the crowd.  The downside of course is that there wasn't a full show on the level of last year's Day 7 (considered by most to be the best NJPW show of the year).  Still the 2015 G1 tourney had a helluvalotta good-to-great matches and built to an absolutely fantastic peak with the "semi-finals" and the Finals show.


The G1 is also known for ongoing story threads throughout the tournament, and one of the most interesting this year was the gradual heel turn of Tetsuya Naito.  Once an entertaining but rather bland babyface character, Naito's persona is now that of a man who simply doesn't care about the fans, his opponents, NJPW officials, or anyone else.  His disdainfully rebellious heel character is fascinating to watch as he toys with opponents by taking forever to remove his entrance attire, and blatantly attacks referees during the match.  I'm loving this character and can't wait to see where it takes him.  I've generally enjoyed Naito's matches but now he's got a really strong act to get me emotionally invested.

Other rolling storylines included Tomoaki Honma's annual quest for a G1 victory (which he finally achieved in a splendid late-tournament bout with Tomohiro Ishii), Michael Elgin's quest to prove himself in New Japan (which he did in spades with several excellent showings), and Shinsuke Nakamura's Night 2 elbow injury that kept him off two shows (sadly we were all robbed of the scheduled Nakamura-Elgin match).

The heavy favorite going into the proceedings was Nakamura, who was coming off back-to-back losses to Hirooki Goto for the IWGP Intercontinental Title (which Nak almost singlehandedly elevated to match the prestige of the Heavyweight Title).  It made perfect sense for him to set his sights back on the top championship, plus a G1 win would set up a very intriguing WrestleKingdom main event against his Chaos stablemate Okada.  But very unexpectedly Nak came up short in the Finals against Hiroshi Tanahashi, and the stage is now set for a rematch of the WK9 main event.  I have mixed feelings about this turn of events, as I was really looking forward to Nakamura's championship quest and thought maybe he or Okada would be ousted from Chaos and turn full babyface to really galvanize their feud.  While Tanahashi vs. Okada is always a superb main event, we did just see it this past January and I think they'll be hard-pressed to top that match.  Of course I could be wrong.  I'm just not sure about the idea of the same match headlining three of the past four WrestleKingdom shows.  On the other hand though, this does open up the possibility of a Nakamura vs. AJ Styles co-main event, which is a "bucket list" match if there ever was one.  So perhaps Nakamura will be set up to win next year's G1 and then finally get his Championship match at WK11.

In the meantime there are some very intriguing potential matchups in the works, with AJ almost certainly getting a Title rematch with Okada, likely at King of Pro-Wrestling I would think, Kota Ibushi possibly challenging Togi Makabe for the NEVER Openweight Title, Yuji Nagata maybe going after Goto's I-C Title, and it looks like probably a Naito vs. Shibata feud.  So the autumn months should bring some excellent PPV offerings leading up to WrestleKingdom.  This will be the first WK show I'll actually get to anticipate, so that'll be a lot of fun and the payoff is sure to be spectacular.

As for the G1 itself, this year's tournament yielded probably 8-10 Match of the Year candidates, and here are my top ten picks in chronological order:

Night 5: AJ Styles vs. Kota Ibushi - Not quite as awesome as their Invasion Attack match in April, but not far off either.  Incredibly exciting from start to finish, and it gave Ibushi a big win.

Night 7: Kota Ibushi vs. Katsuyori Shibata - Ibushi proved himself an early MVP with three great showings.  This one was full of crazy brutal strikes as Ibushi kept up with Shibata's rugged offense until falling to the Penalty Kick.

Night 10: Tomohiro Ishii vs. Yuji Nagata - These two had a great slugfest as always, and Ishii picked up the win after a brainbuster.

Night 13: Hiroshi Tanahashi vs. Katsuyori Shibata - This was all kinds of incredible and I'd rank it right up there with the Night 1 and 5 standouts.  Tanahashi and Shibata have amazing chemistry and I'd love to see a feud between them.

Night 14: Hirooki Goto vs. Tomohiro Ishii - An amazing example of classic Strong Style.  Just an absolute war in front of a crowd that ate it up with a spoon.

Night 17: Hiroshi Tanahashi vs. AJ Styles - This was just EPIC.  27 minutes of exemplary storytelling with the top Block A spot hanging in the balance.  AJ's Bullet Club members were not at ringside, so there was no outside shenanigans, and the result was the best match these two have ever had together.  I was fully expecting AJ to take this one, so the suspense in the final minutes was palpable.

Night 18: Tomohiro Ishii vs. Michael Elgin - The pace these two set was nothing short of extraordinary.  A 14-plus-minute match where the volume was on 10 the entire time.  If anyone doubts Elgin belongs in New Japan, they need only watch this match.

Night 18: Kazuchika Okada vs. Shinsuke Nakamura - The rematch from last year's fantastic G1 Final was nearly as good.  This had a serious big match feel and after some first-half trepidation, Okada and Nak pulled out all the stops in the second half.  Nakamura got an unexpected submisson win, which should eventually lead to a Title match in the next year or two.

Finals: Hiroshi Tanahashi vs. Shinsuke Nakamura - Unbelievable Final match.  I've seen these two wrestle half a dozen times or more, and this blew away all their previous work.  Going into this I likened this rivalry to Shawn Michaels vs. Bret Hart, where all the ingredients were there for consistent five-star matches but somehow they never quite had one.  That's all out the window now, as this was a surefire top Match of the Year candidate.  The drama on display here was electric and I couldn't believe some of the near-falls they put together.  Just thirty-two minutes of sublime big-time pro wrestling.


So that's my take on G1 Climax 25.  It's safe to say I'll be following this tournament every year for the forseeable future.  It's a big undertaking to be sure, but the consistent match quality is well worth it, and this roster knows how to deliver huge and build to a tremendous peak in the final stretch.  Some year I'd love to see the G1 roster whittled down to maybe 8 men per block, which would only necessitate seven 8-match shows plus the Finals, spread out over two weeks.  Imagine the slew of great top-to-bottom shows we'd see.  The problem with a 20-man roster is there are inevitably a handful of participants who clearly aren't winning the tourney (Gallows, Kojima, Fale, etc.), so it'd be amazing to see a G1 where half or more of these guys are potential winners.  It's an interesting thing to ponder anyway.

That'll do it for me today.  Comment below with your thoughts on G1!
Posted by Justin Enuffa Ballard at 1:05 PM