(Editor's Note: I thought I'd defer to my associate Dan Moore to say a few words about the passing of Roddy Piper.  While I was obviously a fan of the Hot Rod, Dan admired him on a different level.  So it only seemed right for him to take the lead on this one.) 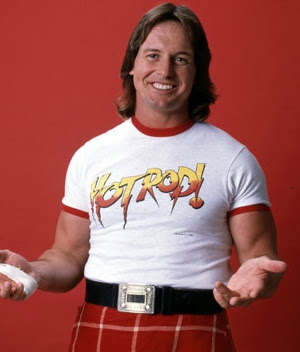 I grew up in a household that watched and tolerated wrestling to different degrees. My father went to live events with his buddies a lot. My mother used to let me, my older sister and younger brother stay up past our bedtime to watch Prime Time Wrestling, the precursor to RAW. She didn't mind wrestling but didn't much pay attention either. Around the corner was my Aunt Patty and my cousin John Michael who was like a big brother to us.  He watched all the time and tried out his wrestling moves on us much smaller kids. Auntie paid attention to varying degrees. But there was one wrestler everyone that all of us agreed was can't miss television: The Hot Rod was the best.

I was seven when WrestleMania came around back in 1985. That was back in the day when there were clear cut good guys and bad guys. My childhood brain loved the Hulkster, Junkyard Dog and Hillbilly Jim. I obviously hated King Kong Bundy and Greg "The Hammer" Valentine. They were jerks and cheats.


But not Roddy. Nope. All the grownups LOVED him. And laughed at him. As they enjoyed him, I did as well. I couldn't hate Hogan's biggest foe at the time because everyone was letting me know how awesome Piper was. He was electric when he was on the screen. His Piper's Pit segments were must-watch for all my family members. Christ, to this day my cousin still screams out arguably Roddy's best quote, "Just when they think they got the answers, I change the questions."  He's especially fond of yelling this after a few Bud Lights.

When Roddy "retired" after 'Mania 3, everyone was upset. Which only made his return at 'Mania 5 that much better. He was hosting a special Piper's Pit with guests Brother Love and sleazy, chain-smoking 80's talk show host Morton Downey Jr.

For my family, this was the most anticipated event of the night. Nevermind the MegaPowers exploding, the Hot Rod was back! As the guys and kids watched the PPV in the living room, from the kitchen my mom and aunt would constantly be screaming in to us "Is he on yet?"  They couldn't wait to see their favorite Canadian pretending to be Scottish. When his music hit, the ladies came running in. We were all clapping and cheering our returning hero. His segment was filled with his usual charisma, sarcastic jokes and his general "I'm the coolest guy here" attitude. And we ate it all up.

When he finally dispatched Downey's cigarettes with a fire extinguisher to the face, the laughing hit its apex. It's the hardest I ever saw my aunt and mother laugh at anything, short of Chevy Chase in National Lampoon's Vacation. Piper returned, and he did not disappoint. He would go on to host Prime Time Wrestling and we all watched every week.

Piper showed me at that age that you could like the bad guy. It didn't matter if he was hitting good guys with coconuts as long as he did it with passion. And the Hot Rod was full of passion. He holds a special place in my wrestling heart because my whole family loved him. It may seem silly to say, but that one wrestler brought us all together to laugh and enjoy his performances over and over again.  My aunt passed away five years ago and with Roddy's passing it brings back all these great memories of her and the times we all watched wrestling together. He was and will remain one of my favorite wrestlers ever. Rest in Peace, Hot Rod. Give 'em hell up there. Hopefully they don't run out of bubblegum.
Posted by Justin Enuffa Ballard at 8:29 AM