The first occurred early in the show as The New Day, fresh off regaining the WWE Tag Titles at SummerSlam, were interrupted in their celebration by The Dudley Boyz, who haven't been seen together on WWE TV since 2005.  Both Bubba and D-Von appear to be in tremendous shape (Bubba especially has stepped up his game the past few years, enjoying a main event run in TNA) and a feud with such a decorated tag team will hopefully boost the credibility of the Tag Champs.  Big E, Kofi and Xavier Woods have one of the best acts in WWE at the moment (Woods has been brilliant with his ringside antics during their matches), so the optimist in me sees a three-month program involving some underhanded tactics allowing New Day to retain the straps, and then finally they get a clean win over the Dudleys in the blowoff match. 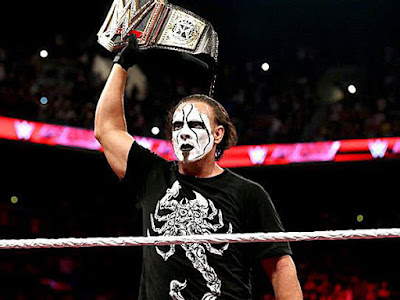 The other return last night was of course Sting (or "The Vigilante, Sting" for those of you wondering why Police frontman Gordon Sumner showed up on RAW), who hasn't been seen since his unexpected (and ill-advised) WrestleMania loss to Triple H.  Sting pulled the ol' switcheroo in the main event segment, appearing in place of Seth Rollins' commemorative statue and wordlessly challenging The Authority's chosen one to a WWE Title match at Night of Champions.  As with the Dudleyz scenario, a high-profile feud with such a beloved legend seems designed to give the young WWE Champion a major rub, presumably leading to a much-needed clean win.


So why am I dreading both of these inevitable matchups?

Maybe it's because of WWE's track record since 2002 of Booking with Band-Aids.  Rather than ensuring the long-term health of their full-time roster by strategically building up their resumes with decisive wins over established names from yesteryear and each other, WWE tends to use them as fodder for their older counterparts, so said Legends can then face other Legends in one-off main events that carry no lasting consequences.  This unhealthy trend started with The Rock vs. Hulk Hogan at WrestleMania X8, and it's been accelerating ever since.  In the beginning these kinds of matches were infrequent and presented as truly special attractions, usually reserved for the biggest show of the year.  Rock vs. Hogan wasn't even the main event of the show (though many feel it should've been); the main focus most of the time was still on the full-time stars and Championships.  Then all the former WCW headliners became available and WWE signed 'em all.  From 2002-2004 we were treated to a bevy of "dream matches" like Triple H vs. Hogan, Triple H vs. Scott Steiner, Rock vs. Goldberg, Triple H vs. Kevin Nash, Triple H vs. Goldberg, and Brock Lesnar vs. Goldberg.  None of them were particularly well-received, nor did they result in a ratings upturn, and by mid-2004 the company had gotten back to the business of building new stars (Cena, Orton and Batista).

But Hogan returned in 2005 and took the headlining match at that year's SummerSlam against Shawn Michaels.  Their program was tailored to Hogan's demands and thus Shawn was turned heel despite the crowd not really wanting to boo him, and after one match (that was supposed to be the first of at least two), Shawn went back to being a good guy and Hogan went home.  So the match itself existed in a vacuum.

Not only does this pattern condition the audience to not care about any of the talent under the age of 45, but the median age of these "special attractions" keeps climbing.  When Hogan returned to the WWF in 2002 he was 48, and I thought that was outrageously old to be main eventing a PPV, let alone winning the WWF Title.  Six years later Ric Flair was still heavily featured as an in-ring talent at age 59 (To be fair to Flair his career-ending match with Shawn Michaels was great).   WrestleMania 22 featured Shawn taking on the 61-year-old Vince McMahon.  'Mania 26 featured the 53-year-old Bret Hart vs. the 65-year-old Vince.  This year's WrestleMania featured Triple H vs. Sting, their combined age being 101.  Where's the cutoff?  When is a name from the past simply too old to still be donning the tights?  More importantly, what chance does an under-thirty star of 2015 have to become a true money-drawing headliner when almost all the top slots at every major PPV are allotted to luminaries who peaked during the Clinton administration?

Back to last night's goings-on.  Seth Rollins is slated to defend the WWE Title against Sting at Night of Champions.  Like I said, in a perfect world this gives Rollins the chance to beat a major star.  But logically I have some issues with this.  First, Sting has exactly one WWE match under his belt, which he lost.  He's officially 0-1 in WWE.  How does that record earn him a WWE Title match over the host of full-timers who didn't make their in-ring debut before Seth was even born?  Second, are they really going to have Sting lose his first two WWE matches in a row?  Seems like an odd way to use such a vaunted Legend.  Or worse, would they actually put the Title on him??  Yeesh.  And if Rollins can't beat the 56-year-old but his boss Triple H could?  What does that say about the current double Champion?

The Dudleys at least add some star power to an ever-struggling tag team division, plus they're both still in their early 40s.  If used properly they could help elevate the other teams so that in a couple years the young tag division can fully stand on its own.

I do think it's strange that on this one night RAW was invaded by a buncha TNA guys.  I know what you're saying, "But Justin, The Dudleys were already famous in WWE before TNA got 'em."  Yeah, but they were in TNA for a decade; longer than their WWE run.  And Sting is more famous for his TNA work than he'll ever be for his few WWE matches.  Let's be honest about this.  Christ, if you were gonna scoop up some TNA names, couldn't you get Kurt Angle and Bobby Roode instead??
Posted by Justin Enuffa Ballard at 12:02 PM