Deflategate: Why Are We Still Talking About This?

The New England Patriots have been mired in a 'controversy' of the NFL's making. During the AFC Championship game, some footballs were found to be significantly deflated of air. Or they weren't. Depending on which lie in the Wells Report you want to believe. But clearly the air gauge they used to measure the PSI showed this, right? Depends on which air gauge the Wells Report wants to tell us the refs used. The whole thing is a blueprint on how not to investigate something. The lack of science, the omission of facts and the complete keystone cops atmosphere of this would be hilarious if it weren't so frustrating.


Yesterday the testimony from Tom Brady's appeal hearing was released and...wow. Does it paint quite the bad picture for the NFL. There's quite a few takeaways from it. Here's a few thoughts.

1. JOHN HARBAUGH IS A LIAR

For months, it's been rumored the Baltimore Ravens tipped off the Indianapolis Colts about some shenanigans with Patriots footballs. Ravens Head Coach Harbaugh has vehemently denied this.

Yesterday's release shows otherwise. The Special Teams coordinator from the Ravens called Colts Coach Chuck Pagano about something screwy with the kicking balls (which, by the way, are never touched by game day staff until they hit the field. Those are issued straight out of box by NFL referees). Now, maybe you can make the argument that Harbaugh didn't know this but then that means one of two things

A) Harbaugh has no control over his staff and they do whatever they want, including going over his head and talking to other organizations

You make the call.


2.  TROY VINCENT IS A HYPOCRITE

Vincent is currently the NFL executive vice president of football operations. He is also, by all accounts, the most hypocritty hypocrite of all time. Tom Brady has been suspended four games for most likely being generally aware that some footballs were probably tampered with but maybe not because SCIENCE. But Aaron Rodgers, Pro Bowl QB for the Green Bay Packers, actually said he likes to push the limits of the PSI levels in the footballs. Not generally aware. He told this to broadcaster Phil Simms, who quoted this on an NFL broadcast. 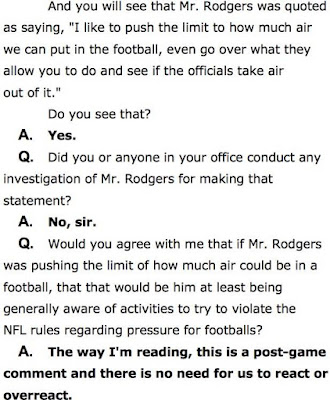 Not only was this laughed about, it's not even a blip on the NFL's discipline radar. As pointed out yesterday from Stephanie Stradley, a lawyer from Houston with no horse in this race (follow her on Twitter @StephStradley, she's brilliant), this didn't even register as even a minor faux pas for Vincent or the NFL.

Rodgers specifically said he likes to push the limits of the air pressure in footballs, and nothing. Brady might be generally aware that some other guy maybe fiddled with some game equipment, four game suspension. Yeah, makes sense.


3. ROGER GOODELL IS AN IDIOT

Throughout the whole testimony, Goodell constantly butts in to get reassurances for answers that are in plain English. Or he has no idea what the word 'Yes' means.

He lacks any kind of reasoning and seems to not understand how language or the world in general works. He asks about Brady getting rid of his phone (by the way, Goodell introduced the word "destroyed." Nowhere does Brady say this. That language was introduced by Rog and told to the public to make him sound guilty) and seems to have no clue what a phone is or how it works.

Evidently, Big Rog thinks cell phones are owned and operated by the Mission: Impossible crew. This is the guy in charge of the biggest sports entity in the world.

This whole Deflategate nonsense has been a sham and a witch hunt from the get-go. It's an embarrassment for Goodell, Brady, the Patriots and all of the NFL. The sooner Brady is exonerated and plays in week one, the sooner we can all forget this and watch some football again. Like we all want to.
Posted by Justin Enuffa Ballard at 2:09 PM