WWE SummerSlam 2015 was Better Than WrestleMania 31

Sometimes it pays to have low expectations.  Case in point, last night's SummerSlam extravaganza.  I went into this show with the mindset of "I'll be content as long as I don't feel like my night was wasted," and what I got was a consistently very entertaining wrestling show with a ton of variety where every match felt like it got enough time, and a few actually stood out. 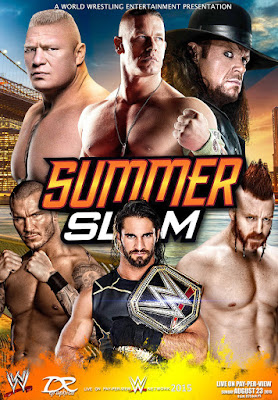 The much-dreaded-by-me Brock Lesnar-Undertaker main event was easily the best match delivered by these two since their No Mercy 2002 Hell in a Cell.  It was streamlined, hard-hitting, full of nice little nuances (the double situp for example), and while the ending left me baffled at first, once the replay explained everything I actually kinda liked it.  Granted we've been conditioned that the timekeeper never rings the bell until the official calls for it, but in all these years you'd think human error would get in the way at least once.  Well, last night was that one occurrence.  Taker tapped out and the timekeeper jumped the gun.  It was a realistic screwup and hopefully WWE follows up on it by having The Authority discipline said timekeeper on RAW.  Moreover, it protects Lesnar as an unstoppable monster, sets up the inevitable "rubber match" at WrestleMania, and reframes this feud with Taker playing more of a heel (don't get me wrong, getting a Dallas crowd to boo Taker is going to be impossible, but still).  I liked this match a lot, and the lasting image for me will be of the defiant Lesnar flipping Taker off just before passing out to Hell's Gate.


The Match of the Night for me was Seth Rollins vs. John Cena.  Cena's had a banner in-ring year against a wide array of opponents, and Rollins is supernatural.  Both guys were motivated to overshadow every other match despite being placed only 7th of 10 bouts, and aside from a couple miscues, this was a helluva contest.  My fellow New Japan fans surely noticed Rollins borrowing from Hiroshi Tanahashi's moveset (High Fly Flow, Slingblade), and even Kota Ibushi's (standing shooting star press).  When Rollins inevitably turns babyface in the next couple years he'll be Shawn Michaels-good in that role.  Now for that finish.  Jon Stewart's heel turn bothered me much more than the Phantom Timekeeper bit.  First, I'm not sure what explanation they're going to give, other than "Hunter and Steph paid me to do it," which begs the question, "If Hunter and Steph were going to screw over Cena, why not send down a trained wrestler, or just interfere themselves?"  A more logical explanation would be "Seth and I have been buddies all along."  Anyway, this was a pretty weak finish to an otherwise stellar match, but then I was expecting a DQ of some kind.  So this was actually more decisive than I predicted.  See what I mean about lowered expectations paying off?

The third standout was Kevin Owens vs. Cesaro, which was given the unfortunate second-to-last spot (in any other company that slot is a huge compliment, but not in Bizarro WWE World) in front of a crowd clearly waiting for the main event.  But the two ROH alums delivered a fine match that got a good amount of time.  It felt like the first in a series, and hopefully they'll get the chance to top themselves at Night of Champions.  Owens was also probably pretty banged up from his NXT Ladder Match the night before, so the fact that he performed at the level he did is significant.

The rest of the show was full of pretty good stuff.  Sheamus vs. Randy Orton, while not quite as good as their Battleground match, was nonetheless a solid opener with a nice clean finish (which Sheamus desperately needed).  The 4-Way Tag Title match was loads of fun and got enough time to resonate.  I'm very glad The New Day regained the straps and I hope they keep them long-term.  Their act is gold and the fans are starting to cheer them for truly owning such an abrasive gimmick.  Rusev vs. Dolph Ziggler was so much better than I anticipated.  These two got twelve minutes and made them count.  The involvement of Lana and Summer was pretty toned down, and while it led to a double countout, that ending didn't bother me as the obvious setup to a rematch (possibly of the mixed tag variety).  The middle of the show featured the only two throwaways, Stardust/Barrett vs. Amell/Neville was short and forgettable but inoffensive.  Ditto for Ryback vs. Show vs. Miz, which should've culminated in a more decisive win for Ryback.  Hopefully that feud's over.  The Shield 2.0 vs. The Wyatts 2.0 was a lot of fun and I'm really enjoying Ambrose and Reigns' chemistry together.  I wouldn't mind seeing them win the Tag belts at some point actually.

Finally there was the Divas three-way, which shockingly got a full fifteen minutes.  Let me preface this by saying I'm thrilled the women's division is finally being taken seriously.  Unfortunately this probably wasn't the match to allot fifteen minutes, as it exposed just how much better the NXT women are than their main roster counterparts.  Once Sasha's team was out, the match hit a long lull period as the Bellas controlled most of the offense.  Look, I've been impressed with how far Nikki and Brie have come, but in this scenario Team Paige should've dominated the action.  At least the right team won.  Now it's time to start featuring full-length singles matches with these women, a la the amazing Sasha-Bayley NXT Title match on Saturday (which was not only the match of the night, but may have stolen the entire weekend).

All in all, warts aside, SummerSlam 2015 was a very entertaining show with a lot about it to like.  While nothing on the card was MOTY-worthy I'd say seven of the ten matches were three stars or better, with only the Divas match, the Stardust bout, and the I-C triple threat falling short.  I liked how much actual wrestling was on this show and based on how solid their time management was I'd be all in favor of SummerSlam being a four-hour event going forward.  I would rate this show about an 8/10 and say decisively it was superior to WrestleMania PlayButton.

Best Match: Seth Rollins vs. John Cena
Worst Match: Ryback vs. Big Show vs. The Miz
What I'd Change: Put Owens vs. Cesaro earlier on the show so the crowd would've been into it more
Most Disappointing Match: Divas Match
Most Pleasant Surprise: That the overall show was so strong
Overall Rating: 8/10
Better than WrestleMania 31?: You bet your sweet bippy.

What did you think?  Comment below!
Posted by Justin Enuffa Ballard at 1:20 PM