Austin shows up on RAW and talks about Booker T's challenge, saying he'll fight anyone who wants to try and take the belt away from him.  "Why don't we find out who the Undisputed Champion is, ya dumb sonofabitch?"  Vince interrupts to a chorus of boos and says everyone should calm down because Austin vs. Booker T is not happening.  "Not tonight, not any night.  Why?  Because WCW superstars don't deserve to wrestle in this ring.  They haven't earned that right, and I don't sanction B-players from a second-rate company competing against WWF Superstars."  Austin asks the crowd "If you wanna see this WWF Superstar kick the crap outta the WCW Champion at Judgment Day, gimme a 'Hell yeah!'"  The crowd of course obliges.  Vince again puts the kibosh on Austin vs. Booker.  "I'm still the boss, and I decide who your opponent for Judgment Day will be.  Tonight, in this very ring, we'll see a Battle Royal to determine the new #1 Contender!"

Elsewhere on the show, Undertaker and Kane defeat The Dudley Boyz in a Tag Title match, before DDP & Kanyon show up on the Titantron again, challenging them for the belts. 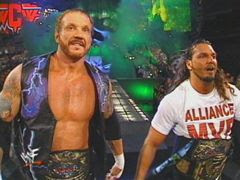 The #1 Contender's Battle Royal boils down to Triple H, Chris Jericho, Chris Benoit and Kurt Angle.  Benoit and Angle take each other out of the match, grappling until they both go over the ropes.  But before Hunter and Jericho can determine a winner, the masked men surround the ring again, pausing a moment before laying waste to the two WWF stars.  Booker and Bischoff unmask, Bischoff grabs a mic and says, "Vince, this is gonna happen every week until you give my WCW Champion a match with your WWF Champion!"  The WWF locker room runs down again but the WCW crew retreats.

But in the weeks leading up to Judgment Day Austin continues pushing the issue of wanting to fight Booker, while Vince keeps resisting.  Security is beefed up to prevent further WCW interference but several attacks on WWF wrestlers happen outside the building.  DDP and Kanyon assault the APA at a bar, smashing them with beer glasses.  Booker T knocks Rikishi out with a shovel and slams a car door on him.
Two weeks before Judgment Day Vince finally agrees to the Austin vs. Booker match, on the condition that if Austin wins, Bischoff and WCW go away forever.  He informs Triple H that at Judgment Day he will now get an Intercontinental Title match against Chris Jericho instead.

The Judgment Day lineup is: 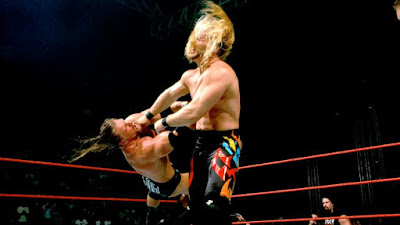 In the main event Austin and Booker have a chaotic brawl that ranges all over the arena.  They trade finishers and each kick out.  At the 20-minute mark Austin hits a second Stunner and the lights immediately go out.  After thirty seconds they come back on and Austin is in the ring surrounded by a ring of masked men, and Booker is nowhere to be seen.  All but two unmask again, and it's the usual WCW midcarders, including DDP and Kanyon.  One of the two remaining guys unmasks, revealing Ric Flair again.  Austin gets in Flair's face, but the other masked man spears the shit out of him.  JR yells, "Oh my God!  It can't be!"  The mask comes off and it's Bill Goldberg!  Eric Bischoff appears on the screen and says, "Tonight was never about one match, Vince.  Tonight was about firing another shot, right to the heart of your Champion."  The WWF guys run out to help Austin and the WCW guys retreat once again.  Vince crouches over Austin and yells to Bischoff, "What are you doing to my company??" to close the show. 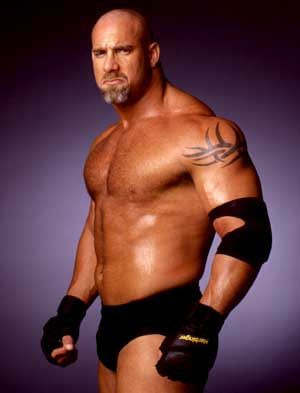