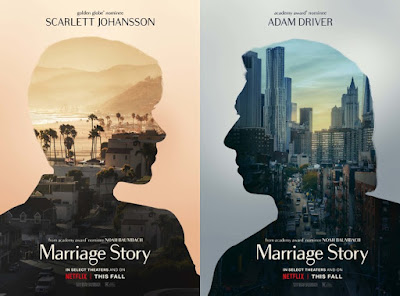 With his new Netflix-produced film Marriage Story, Noah Baumbach has crafted an emotional powderkeg.  Starring Scarlet Johanssen and Adam Driver as a 30-something couple going through an ugly divorce, Marriage Story is an understated, at times upsetting, family drama that shows us the best and worst of a generally likable husband and wife.

The film doesn't exactly take sides, though the husband Charlie spends the first act mostly being blindsided after his wife Nicole hires a high-powered attorney (a stellar Laura Dern), who convinces her client that Charlie needs to be punished for an extramarital affair and his to-a-fault devotion to his work.  Nicole wants a divorce because she feels like she has nothing of her own in the marriage; Charlie is a successful New York theater director and she is his leading lady, but she's got a television pilot on the table in LA, setting up an impasse.  Initially the pair agree to an amicable, lawyer-free divorce, but Nicole brings in Dern's shark, and the couple's friendliness devolves quickly.

The second act largely involves Charlie flying back and forth, trying to balance west coast time with his son Henry (Nicole, via her lawyer, is threatening to take away custody) with an upcoming Broadway run for his play.  Forced to hire his own attorney, Charlie initially consults a rival shark (played by a scenery-chewing Ray Liotta) but realizes he can't afford $900 an hour plus a $25k retainer, and instead hires a semi-retired, thrice divorced lawyer played by Alan Alda, who's seen the process "bring out the worst in good people" and urges Charlie to acquiese to Nicole's demands.  Despite this obviously overwhelming pressure, compounded by Henry's apparent lack of interest in spending quality time with him, Charlie mostly tries to roll with the punches and make the best of things.  But the cracks begin to show when it becomes apparent that he'll need to establish permanent residence in Los Angeles or risk losing Henry altogether.
The tension slowly builds to an emotional explosion late in the film, when both leads get their well-deserved Oscar clip that serves as a dramatic centerpiece.  Nicole and Charlie set out to have a civil, one-on-one conversation, but it escalates into an all-too believable screaming match between the two estranged spouses, wherein awful things are said.  This scene is a superbly executed gut-punch that will resonate with anyone who's ever been married for a considerable length of time; try to imagine the worst thoughts and fears about your husband or wife, and some version of them is probably said out loud in this brutal scene.

I realize I haven't said much about Driver and Johanssen's performances.  ScarJo is fantastic as always, attaining understated poignancy and being relatable even as she allows her overbearing lawyer to pile excessive stress onto Charlie's shoulders.  And Adam Driver further proves why he's one of the most compelling young stars in Hollywood, playing Charlie with affable restraint until he reaches his breaking point (Interestingly Charlie's character arc in the film is paralleled in Nicole's state of mind at the film's outset - she bottled everything up until she couldn't anymore).  Both leads are Oscar-caliber, but Driver steals the show.

Marriage Story's script reminded me of some of Woody Allen's more serious work; it's got many moments of levity but many more of weighty relationship drama, producing a splendid showcase for its actors to explore flawed but ultimately wholesome characters.  The writing and direction are strong (if perhaps disproportionately centered on Charlie's experience), but it's the performances that drive the bus.