What's up folks?  Well it's Christmastime, and that means hanging lights, trimming trees, and buying presents for your loved ones so they can promptly return 'em to the store on the 26th.  But this time of year always triggers childhood memories of how magical it all used to be.  The seemingly endless suspense of wondering what cool shit your parents/Santa was gonna leave you, the seemingly endless get-togethers with the extended family on Christmas Day, while you're bored shitless just waiting to get back to all your new toys, the seemingly instantaneous week off from school before that sad, lonely return on January 2nd, when you and your school friends compared Christmas toy hauls.

And speaking of Christmas toys, I got to thinking, what were my favorite gifts over the years?  Which December 25th surprises made my big toe shoot up in my boot, as Little Richard would say?  Well lemme take you back to a simpler time..... 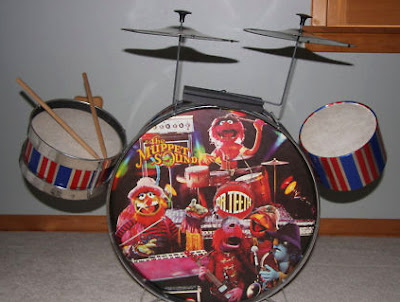 My big Christmas gift at age three was a toy drum set with pictures of the Muppet Show band Dr. Teeth on it.  I fell in love with this stupid kit instantly, and while I never actually learned to play the drums, I had a grand ol' time beating the crap outta those skins.  It outlived its novelty and usefulness within a couple years, but this was the fist major gift I ever remember getting.  For me it's what set the tone for this massive December festival so many of us hold dear. 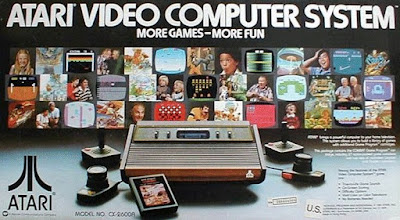 I imagine my household was one of millions that got this console for Christmas around this time.  Our big family gift in 1982 was the legendary Atari 2600, which came with the incredibly diverse Combat (featuring tank battles, airplane battles, boat battles, and any other 4-bit vehicles you could blow up real good), but my parents also picked up Asteroids, Surround (which I loved because it was essentially Tron's "light cycle" sequence), and Video Olympics (a massive collection of sports games that utilized the "paddle" controllers), plus a couple other games I can't recall at the moment.  This console became our very lives for a few years, and the whole family enjoyed it.  Everyone who was anyone in the early 80s had one of these damn things, and the game cartridges were plentiful.  By 1985 we had probably 30 games, and it wasn't until '86/'87 that another game console had taken its place in America's heart.... 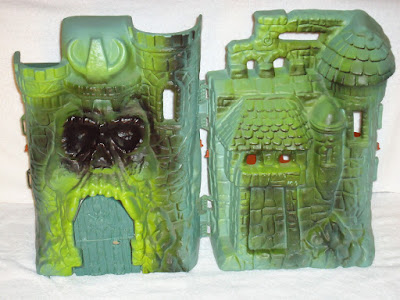 My other big gift in '82 was this classic He-Man playset, a badass-looking castle with a ton of accessories but in retrospect, very little playability (A castle with only two floors?  And an elevator??  And a laser cannon???  The hell sense does that make?).  But at age 7 I didn't care, this thing was fuckin' fantastic.  I had a handful of the figures by this point and played with this castle like it was my job.  A few years later Snake Mountain followed and now I had lairs for both the heroes and villains.  Now that I think about it, who exactly was supposed to live in Castle Grayskull?  Was it He-Man's house?  I dunno. 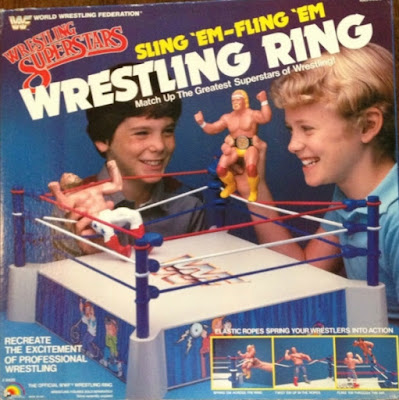 1986 was the year my three-decades-and-counting obsession with fake fighting began.  Thanks to the Hulk Hogan's Rock n' Wrestling cartoon show I was hooked on these larger-than-life characters, and in November of that year I started watching the real (er, fake I guess) thing.  Coupled with this new interest was my urgent need to scoop up all the new WWF toys that had hit the shelves.  My first two Wrestling Superstars figures (if you can call them that, they were essentially big hunks of rubber you could easily beat someone to death with) were Hulk Hogan and George "The Animal" Steele.  But that Christmas, in addition to a Junkyard Dog figure, I got the official Wrestling Superstars Sling 'Em Fling 'Em Wrestling Ring.  What colossal douche nugget came up with that moniker?  Jeezus H. Christ.  Anyway, this toy was the goddamn tits.  The ropes really bounced, the mat really made a thumping noise when you bodyslammed someone, it was like hosting WrestleMania in your bedroom.  The only drawbacks to this toy were a) that it was nowhere near to scale compared to the figures, and b) that the plastic mat was so weak and the figures so heavy, mine cracked after a few months and had to be replaced.  I got much more extensive use out of this ring when I discovered that He-Man and Remco figures were much better suited for it.  But this was one of the most important, lasting toys of my young life. 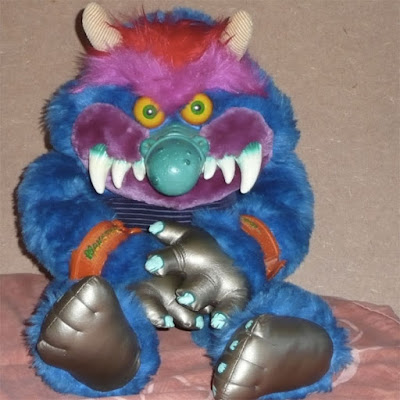 That same year I got this hideous little number.  Gotta be the ugliest stuffed animal of all time.  But he was great.  The thing came with break-apart chains, for Chrissake.  Like King fucking Kong.  I later named My Pet Monster "Harry" (after Harry and the Hendersons, but coincidentally that's also my son's name) and used him as a wrestling move victim for a few years before he went up in the attic.  Today he lives in my son Harry's room, under the name Maber (No idea where my son got that from).  My Pet Monster is the most significant toy that I've passed down to the next generation of Ballards, and for that reason it belongs on this list.

Man, that GI Joe toy line had some goddamn incredible playsets and vehicles.  So much detail and scope.  One such example was the Cobra SR-71 Blackbird-esque plane called Night Raven.  On Christmas Eve 1987 I went to bed at probably 10pm, and was so hyped for presents the next morning I couldn't sleep if you paid me.  I lay there in bed for five hours or so, looked up at the clock, saw that it was 3am and said, "Three in the morning is still morning.  Time to get up and open presents!"  I made my way out to the dining room (which was where the presents could be found in that particular house), and began rifling through my gifties.  I started to open the largest one, a huge rectangular box, and got far enough to reveal that this particular package contained said badass Cobra jet.  Bubbling over with excitement, I whisper-screamed to myself "Raveeeenn!!!" and that's when my stepbrother yelled from the other room, "Justin, you're not opening presents at three in the morning!!!"  This roused my parents and I scurried back to bed before they could catch me in the act, slept until around 7, and only then resumed my gift-opening duties.  Anyway, the toy.  This thing was fucking balls-out awesome, with multiple missile launchers and a bonus fighter plane that attached on top.  Yeah that's right, the plane had another plane ON TOP OF IT.  Still one of the coolest toy vehicles ever made. 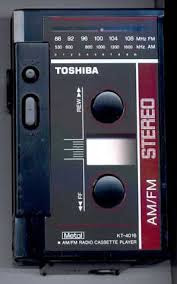 My first-ever portable music device was gifted to me in 1987, and in fact both my parents and my sister gave me Walkmen (Walkmans? What's the correct plural?) that same Christmas.  I ended up returning the one from my sister, as the Toshiba my parents gave me was of higher quality.  I took that damn walkman EVERYWHERE, listening to the very small collection of music cassettes I had at the time, plus the bevy of stupid pretend radio show tapes my friends and I had made.  But this device (and the two subsequent models I bought after it died) was a constant companion, in no small part responsible for my burgeoning interest in music from age 12.  Twenty years later my future wife gifted me an iPod, which by the same token I largely credit with my ever-broadening musical tastes over the last decade.  But it all started with the Toshiba Radio/Cassette Player.  Godspeed, ol' buddy. 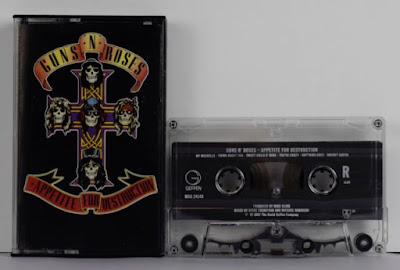 One such example of my budding tape collection was given to me on Christmas the following year.  My first impression of Guns N' Roses was that they were loud, vulgar garbage, but like so many bands/artists I initially hate, they grew on me like a tumor, and suddenly I found myself obsessed with them.  This transition happened just before Christmas, and I lamented the fact that, as far as I could recall, I hadn't asked for Appetite as a gift.  But imagine my euphoric surprise when I unwrapped a tape-shaped present that evening to reveal precisely that album!  I had no idea how my parents knew I wanted it, but no matter, I listened to it front to back that night and Guns N' Roses instantly became my favorite band in the universe (At least till the following summer when they were usurped by Metallica).  I listened the SHIT outta that tape, to the point that the track listing and the clever "Side G/Side R" notes had worn off the goddamn thing.  Only one other tape in my eventual collection suffered a similar fate, and that was Metallica's ...And Justice for All.  So Axl & Co., you made 13-year-old Justin's life. 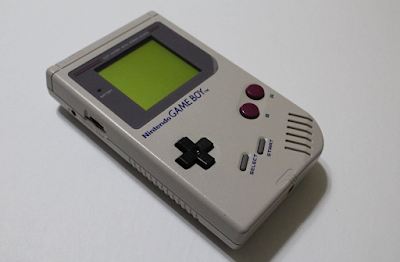 The earliest and best portable videogame console was this late '80s handheld with the shitty two-inch LCD display.  I mean the phone in your pocket is infinitely superior in every way to this piece-a shit, but in 1989 this was the coolest videogame system going, because you could play it anywhere, with headphones to shut out any distractions.  Plus it came with Tetris, the white-hot, hopelessly addictive Russian puzzle game, and I very quickly added Super Mario Land to my collection.  I played this stupid thing for hours daily over the next four years, even bringing it to college with me.  The Game Boy was and is, how you say, "The Motherfuckin' Balls." 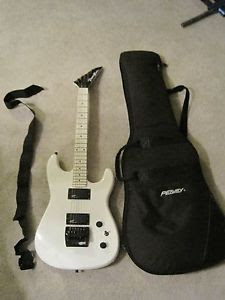 The holy grail of Christmas gifts, the one that changed my life forever, is unquestionably the Dean Z Jammer (Say it with me: HUH??) my parents bought me 30 years ago.  One year earlier I'd become a heavy metal fan, and this newfound love of headbanging music gave this socially awkward teenager an identity; more than that, a sense of purpose in life - I wanted to be a rock star.  Thus I was given this cheapo electric guitar for Christmas, along with three tablature books, for Appetite for Destruction, Master of Puppets, and ...And Justice for All.  I pored over these books and the twenty-odd others I picked up over the next ten years, learning every beloved metal song I could wrap my fingers around.  This guitar represented my career goals and my creative outlet.  I wrote and recorded songs furiously in the hopes that I'd one day be the next James Hetfield.  Spoiler alert: I did not become the next James Hetfield.  But nearly thirty years later that guitar (and the ten or so I've owned since) remains a major part of who I am and why I'm here.  If I had to pick the single most significant Christmas gift I've ever received, it's the Dean Z Jammer, baby.