Welcome to another edition of Top Ten Things, here at Enuffa.com!  These are ten things I like or don't like, and I'm here to tell you about 'em.  Makes sense.

Today it's my ten favorite Christmas movies!  As one who has loved the holiday season since childhood, a big part of my celebrating is in the form of watching Christmas-themed movies.  Some are required viewing every December, while others I only revisit once in a while.  But they all help me get in the ol' holiday mood.

Some notes about this list - I'm only including movies where Christmas itself figures heavily in the plot.  There are a lot of films simply set against the backdrop of the Christmas season, and while some of those are great (Die Hard and Lethal Weapon for example), I don't really consider them Christmas movies in the strictest sense.  So I've limited the list to films that couldn't really work without the Christmas theme/imagery.

Also I'm not including the standard half-hour TV specials from back in the day.  The Grinch, Charlie Brown and Rudolph are all great, but they're TV shows, not movies.  So there.

Finally there are three beloved movies you won't find on this list: A Christmas Story, Home Alone, and Christmas Vacation.  I hate all of them.  I know most people think they're essential viewing, but I can't stand them.  I find them pretty cynical and unpleasant, which defeats the whole purpose of watching a Christmas movie.  Sorry. 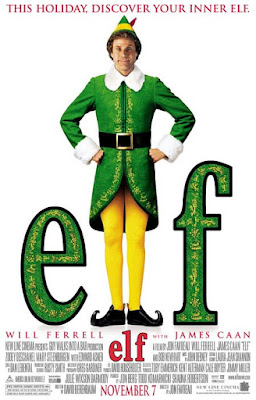 Jon Favreau's 2003 Christmas romp stars Will Ferrell as a Buddy, a human who stowed away in Santa's bag as a baby, and was raised as a North Pole elf.  As Buddy grows to adulthood he begins to realize he doesn't fit in with the other elves, and he seeks out his birth father, a grumpy New York publishing executive played by James Caan.  Filled with lighthearted humor and Ferrell's signature flair for physical comedy, Elf is a classic Fish Out of Water story involving Buddy finding his way in the human world while also managing to save Christmas.  The film peters out toward the end for me, as there's too much emphasis on Santa being chased through Central Park by the NYPD.  But otherwise Elf is a fun little holiday movie that has something for everyone. 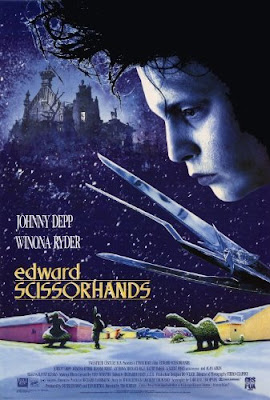 Tim Burton's cult classic Edward Scissorhands stars Johnny Depp as the titular character, a Dr. Caligari-inspired artificial man whose inventor died before he could be finished, leaving him with scissors where his fingers should be.  This of course makes for a very inconvenient existence (As Seinfeld's barber pointed out, "What's he gonna do on-a the toilet?"), and after moving in with Dianne Wiest and her family he becomes a suburban outcast.  This film, like most of Tim Burton's work, takes place in a visually bizarre world full of social misfits and outsiders.  But even among these weirdos Edward doesn't fit in, and the ultimate result is a bittersweet and surprisingly touching love story. 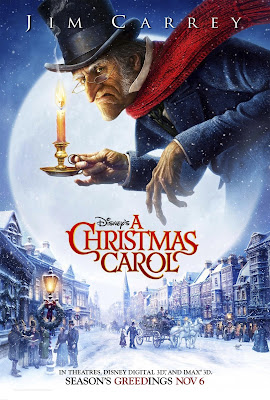 Robert Zemeckis's third and final CG-animated film was a retelling of the Dickens mega-classic (I adore this story and I've included three different film versions on this list) stars Jim Carrey and Gary Oldman in multiple roles.  This version of A Christmas Carol is one of only two films I enjoyed seeing in 3D (Scorsese's Hugo being the other).  The digital cinematography lent itself wonderfully to the format, plunging the viewer into this Victorian world.  Carrey makes a very serviceable Ebenezer Scrooge and also plays the three infamous Spirits, while Oldman lends his voice to Bob Cratchit and Jacob Marley.  This version of the tale is pretty dark compared to others, which I also appreciated (the novel often has a rather grisly tone to it), and the CG animation allowed Zemeckis to bring to life some of the book's fantastical imagery.  A very worthy adaptation of the Christmas classic. 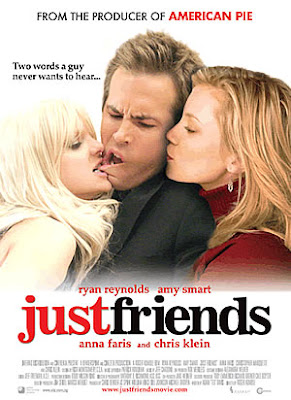 Yup, this one made the cut.  Just Friends is a guilty pleasure.  I freely admit it.  This dumbass 2005 comedy stars Ryan Reynolds as Chris, an overweight high school nerd who is urgently in love with his best friend Jamie Palomino (Amy Smart).  After she rejects his romantic advances he moves to LA, drops a ton of weight and becomes, well, Ryan Reynolds.  Ten years later Chris, now an A&R man for a record label, and batshit insane pop star Samantha James (Anna Faris) are stranded in Chris's New Jersey hometown, and Chris becomes reacquainted (and re-infatuated) with Jamie.  What follows is a totally stupid but hilarious screwball comedy, which I know I shouldn't like nearly as much as I do.  Reynolds and Faris are both gleefully over-the-top and manage to pull an eminently rewatchable lark out of what should've been a disaster.  Absolute drivel.  But I love it.


6. The Nightmare Before Christmas 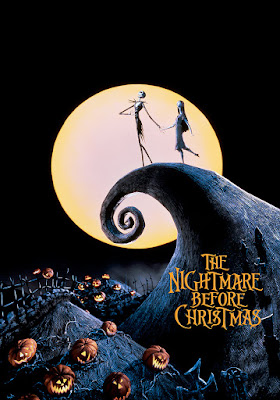 Tim Burton's macabre stop-motion masterpiece pulls double-duty as both a Halloween movie and a Christmas movie.  Released in 1993, TNBC concerns Jack Skellington, the leader/mascot of HalloweenTown, who tires of being a scaremonger and inadvertently discovers a portal to ChristmasTown.  Jack is immediately fascinated by this joyous, heartwarming holiday and attempts to usurp the role of Santa Claus, remaking Christmas in his own way.  The results of course are disastrous, and Jack must work with Santa to put things right.  TNBC has achieved cult-film status due to its incredibly detailed visual richness, quirky horror-inspired characters, and of course Danny Elfman's uniquely haunting music.  This beautifully-realized film remains one of Burton's (and director Henry Selick's) greatest achievements. 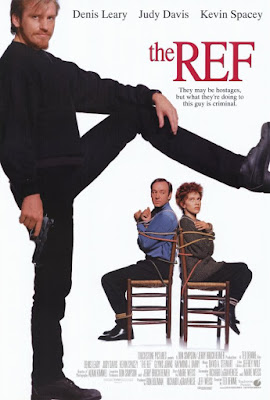 One of the best non-traditional Christmas movies, The Ref stars Denis Leary as a jewel thief who takes a middle-aged couple (Kevin Spacey and Judy Davis) hostage on Christmas Eve and hides out at their house to avoid the authorities.  Only problem is the unhappy couple in question won't stop bickering for five seconds and thus they're impossible to keep in line.  This film contains so many brilliant bits of dialogue and paints such an unpleasantly realistic picture of a dysfunctional family there's probably no one who wouldn't relate to it on some level.  The Ref benefits from several watches, as initially I was mostly entertained by Leary's seething vulgarity.  But repeat viewings reveal countless subtle laughs and one-liners from the other characters, making The Ref a perennial must-watch. 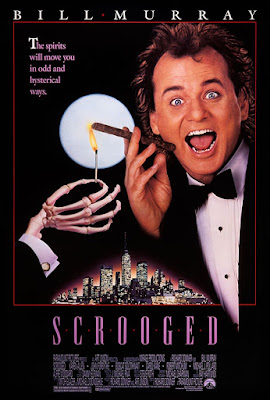 The second Christmas Carol adaptation on this list, Scrooged is a modern (1980s) take on the story, directed by Richard Donner and starring Bill Murray as Frank Cross, the President of the fictitious IBC television network.  Frank is a mean-spirited jerk whose only concern this holiday season is to earn the highest Nielsen rating for his live Scrooge TV special.  His overworked assistant Grace (Alfre Woodard) assumes the Bob Cratchit character, while his brother James (Bill Murray's real brother John) subs for Scrooge's nephew Fred.  Otherwise though this story follows pretty closely the original plot, but with a sardonic, edgy hilarity.  For years this was my go-to version of A Christmas Carol, and I still watch it pretty much every Christmas season. 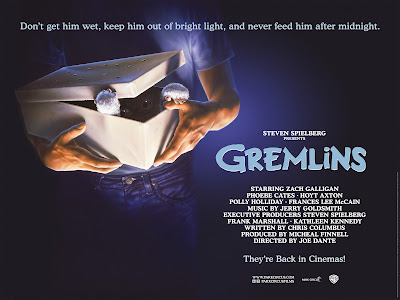 Speaking of non-traditional, Gremlins is a 1980s horror-comedy Christmas classic directed by Joe Dante.  The central character is Billy Peltzer (Zach Galligan), whose father has searched high and low for an unusual Christmas present for Billy and found a strange, cuddly creature called a Mogwai.  The Mogwai (named Gizmo) is adorable but comes with "much responsibility," as sunlight will kill him, water causes him to multiply, and eating after midnight turns him into an evil reptilian monster called a Gremlin.  Of course Gizmo gets wet and sprouts five brothers who then turn into Gremlins and take over the entire town.  The rather grisly action sequences were partly responsible for the MPAA instituting the PG-13 rating, and looking back it's striking how inappropriate some of this film is for younger kids.  Regardless though, Gremlins does a perfect job of blending the horrific and the humorous into a tremendously enjoyable popcorn film. 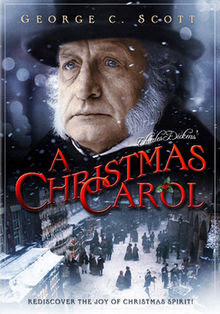 For me the definitive film version of Charles Dickens' immortal classic is the 1984 edition starring George C. Scott as Ebenezer.  Scott's performance is so note-perfect and effortless I have a hard time watching anyone else play this character.  Where most actors playing Scrooge veer toward vulturous parody, Scott makes Scrooge feel like a real-world, misanthropic old businessman.  Take lines like the "boiled in his own pudding" speech.  Most actors tend to perform this bit hurriedly, like they're reading it off a script, but Scott's delivery feels like he's making it up on the spot, and he's just amused himself.  His whole portrayal is totally believable and compelling.  Also the sets and costumes look completely authentic and immersive.  The lighting is a little cheap-looking, but otherwise I really like the visuals in this film.  Aside from a few weak performances (Anthony Walters as Tiny Tim and Caroline Langrishe as Fred's wife Janet), the acting is first-rate for the most part.  David Warner makes a splendidly likable Bob Cratchit, Roger Rees is wonderful as Fred Hollywell, and Edward Woodward nearly steals the show as The Ghost of Christmas Present (A little-known bit of trivia, The Ghost of Christmas Future is played by Michael Carter, who was also Bib Fortuna in Return of the Jedi).  For me this version of A Christmas Carol is required viewing every holiday season. 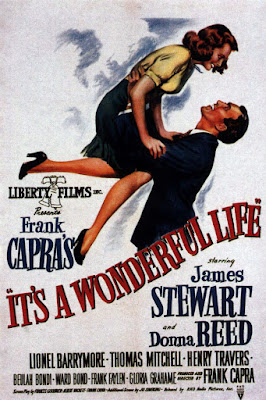 Speaking of required viewing, for me no other film epitomizes the holiday season like Frank Capra's 1946 masterpiece It's a Wonderful Life.  Based on a short story sent out as a Christmas card, IAWL tells the saga of George Bailey (played by the most likable actor of all time, Jimmy Stewart), a small-town fella with big dreams who runs the local Building & Loan, the last line of defense against the town's Scrooge-like figure Mr. Potter.  The film follows George's life from childhood to the present day, and culminates in his contemplating suicide, only to be stopped by a guardian angel named Clarence.  Clarence then allows him to see how his town and the people in his life would've turned out had George never been born.  Jimmy Stewart fittingly cited this as his favorite film and role, and he is absolutely superb.  George Bailey is one of those timeless film characters who could only have been played by one actor, and Stewart gives a career performance here.  Other standouts include the exquisite Donna Reed as George's wife Mary, the delightful Henry Travers as Clarence, and of course Lionel Barrymore as the cantankerous ol' bastard Potter.  IAWL has no fewer than a dozen legit "choke-up" moments that seem to magnify with familiarity (Seriously, if this movie doesn't make the room at least a little "dusty" for ya, you're a heartless prick and I don't wanna know you).  I desperately love this film.