What up, m'nerds!  Welcome to another Top Ten Things here at Enuffa.com!

With another Survivor Series around the corner I thought I'd take a look back at my ten favorite Survivor Series squads over the years.  As many of you may know I'm a huge fan of the Survivor Series concept - always have been - especially when we get to see two superteams duke it out on the big PPV stage.  Often an elimination match is only built around one feud: the captain of one team vs. the captain of the other.  In cases like that you'll often see teams like The Undertaker's 1995 bench, comprised of low-carders Henry Godwin, Savio Vega and "Make a Difference" Fatu.  Hardly an all-star cast, and since they swept that match Taker didn't even really need them.  But when a match consists of multiple A-listers trying to resolve multiple angles and rivalries, magic happens.  Let's take a look at the list.

***Note: I'm presenting this in chronological order, as ranking these ten teams would be difficult, and I don't like things that are difficult.*** 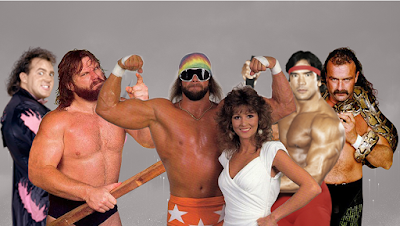 The first-ever Survivor Series match pitted Intercontinental Champion The Honky Tonk Man and four of his pals against two former Champs and a few other guys who'd had issues with HTM.  Savage's team boasted easily the strongest lineup of the inaugural PPV.  Beefcake, Roberts and Duggan were all super over, but the most mind-blowing inclusion was Savage's former archnemesis Ricky Steamboat, with whom he'd feuded on and off for two years.  The sight of these two working together after Savage's babyface turn was incredible.  Ultimately this team made fairly easy work of HTM's lineup, only suffering one pinfall loss (Beefcake) and losing Duggan to a double countout before gaining a 3-on-1 advantage on Honky Tonk, who took a powder at the end.  This stacked team kicked off the grand Survivor Series tradition with a bang.

This particular concept yielded the Match of the Night at the first two Survivor Series PPVs and I can't believe no effort was made before 2016 to bring it back.  The 1987 20-man match was excellent and highlighted the WWF's robust tag team division.  The 1988 incarnation did it one better, delivering my favorite WWF match of 1988.  The Powers' team included three of the most talented duos in wrestling history - The Harts, The Bulldogs and The Rockers - and looking back now it's stunning to think about how much talent resided in that corner of the ring.  The match eventually boiled down to The Powers vs. Demolition and The Conquistadors, when Demolition's manager Mr. Fuji turned on them before being adopted by the now-heel Powers of Pain.  Probably still my all-time favorite elimination match. 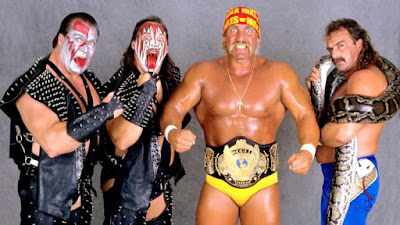 The match may have been a staggering disappointment full of lazy disqualifications and no surprises, but there's no denying what a strong team this was.  WWF Champ Hogan, Tag Champs Demolition, and perennial favorite Jake Roberts assembled for the 1989 main event (slated third on the card for some reason) to take on Ted Dibase, Zeus and The Powers of Pain.  Had the booking been stronger and the heel team not been comprised of stale characters, this could've been a classic battle. 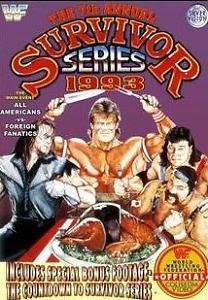 Along similar lines, Lex Luger's 1993 squad included the company's top babyface (and Hogan surrogate) who came within inches of becoming WWF Champion, former WWF (and WCW) Tag Champions The Steiners, and the wildly popular Undertaker (subbing for a kayfabe injured Tatanka).  This match however, while not a technical classic, was infinitely more satisfying than its 1989 counterpart, as the booking employed solid psychological strategy on the part of both teams.  The Steiners did most of the heavy lifting early on against Crush and Jacques Rougeau while Taker and Yokozuna were saved for the later stages (in the end both monstrous competitors were counted out).  The climax boiled down to Luger and Finnish heel Ludvig Borga, and Lex eventually got the duke to close out the 1993 edition. 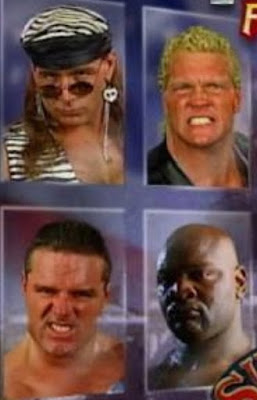 One of my all-time favorite Survivor Series concepts/matches was 1995's Wild Card match, where babyfaces and heels were teamed together at random.  Said match yields two of today's entries, the first being Shawn Michaels' team of Ahmed Johnson, Davey Boy Smith, and Sycho Sid.  Shawn and Sid had just finished feuding, Davey had recently turned heel, and Ahmed was the new monster babyface in town, whom Shawn enlisted to help keep the bad guys in line.  Obviously Shawn and the Bulldog are two legends, while Sid had a great look/gimmick but was never much of an in-ring talent.  But upon his debut I actually had very high hopes for Ahmed as a future main eventer.  He looked like he could slay any giant, was strong enough to slam the 600-pound Yokozuna, and was incredibly agile for a near 300-pound wall of muscle.  This team proved quite effective, losing only Sid (via an errant Michaels superkick) before disposing of their four opponents. 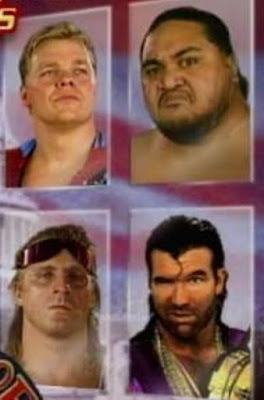 Those four opponents consisted of one babyface and three heels.  Razor found himself in the unenviable position of teaming with three enemies, one of whom (Douglas) he was actively feuding with at the time.  In terms of pure talent and accomplishment this was a helluva stacked foursome, with a former WWF Champion, a set of former Tag champs, a short-lived Intercontinental Champion, and the current I-C Champ.  Sadly though, Razor and his temporary cohorts were never on the same page and the unit began to self-destruct before falling to Team HBK. 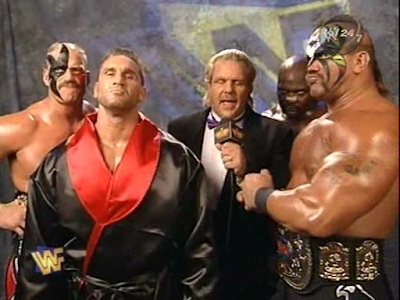 The best elimination match of the 1997 Series pitted Ken Shamrock, Ahmed Johnson and The Road Warriors against hated rivals The Nation of Domination.  This feud reminded me a bit of the old Dusty vs. The Four Horsemen wars from ten years earlier, as the babyface surrounded himself with men of considerable might to take on an evil faction.  Shamrock and his teammates fit together perfectly and proved a formidable alliance against the Nation.  Eventually it came down to Shamrock vs. The Rock, and the former UFC Champion tapped out the future Great One for the win. 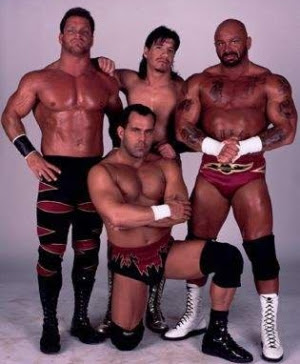 Here's a team that was ready-made for the Survivor Series.  The Radicalz jumped from WCW as a unit, debuted on WWF television in January of 2000, and were booked right away as a major force.  All but Saturn won Championships within the first three months, and by this point Benoit had already headlined two PPVs as a World Title challenger.  They were moved down the card a bit for this PPV but made short work of Billy Gunn, Road Dogg, K-Kwik and Chyna.  Not much of a match, but The Radicalz easily make this list as a four-man team with genuine chemistry. 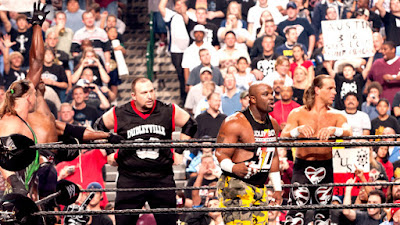 The last truly great Survivor Series elimination match in my opinion took place in 2003, as dueling RAW GMs Steve Austin and Eric Bischoff each assembled a team with the winner gaining full control of the red brand.  Bischoff had a pretty strong lineup of Randy Orton, Chris Jericho, Christian, and the inexplicable choices of Scott Steiner and Mark Henry.  But Austin's crew was truly stacked with three perennial top names and the most decorated tag team of all time.  The match was epic and eventually a bloodied Michaels faced a 3-on-1 deficit, outlasting Christian and Jericho before falling to Orton.  Still one of the best Survivor Series matches in history, featuring one of the finest babyface squads. 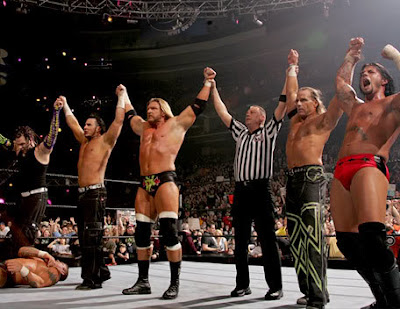 This entry has to be considered one of the best Survivor Series teams, participating in one of the worst Survivor Series matches.  What should've been an epic elimination match was given a mere 11 minutes and the babyface team swept the heels completely.  And the villain team were no slouches either - Randy Orton, Edge, Johnny Nitro, Gregory Helms and Mike Knox could've been booked to give Team DX a run for its money, but WWE decided to more or less embarrass Team Rated RKO for reasons that still elude me.  Regardless though, the good guy squad here is one of the best ever assembled.


That about wraps it up here.  Let me know some of your favorite Survivor Series teams by commenting below, and thanks for reading!  Join us on Facebook, Twitter, MeWe, Mix and YouTube!

Posted by Justin Enuffa Ballard at 9:36 AM