Big weekend for wrasslin' news, folks.  Two major PPV events took place, one good, one embarrassing, but both have some heavy ramifications for the next couple months of matches and angles.

First off, NJPW's final major event of the year is in the books, and Power Struggle was a solid show with three very good top matches.  Chris Jericho of course retained the Intercontinental Title over Evil, in a highly entertaining back-and-forth brawl that helped build toward the Jericho-Naito rematch at the Dome.  Evil held his own in his second-ever PPV main event, while Jericho looked good once again working his Terry Funk-esque style.  Post-match Naito stepped up to challenge Jericho for the Dome, and Jericho said he's already beaten Naito and will not be facing him again.  But New Japan announced the match a day later anyway.  That was weird. 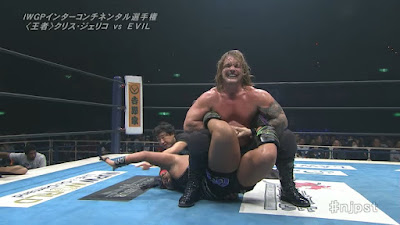 The match of the night for me went to Naito vs. Sabre, a technically dazzling clash of styles typical of Sabre, with Naito struggling throughout to counter Zack's innovative grappling.  Naito worked over Sabre's neck early on, which ended up making the difference, as Zack couldn't lock in his Orienteering with Napalm Death finisher properly.  Naito hit a Destino out of nowhere and followed it up with a second for the win.  A very strong semi-main event match.

The runner-up was Ishii vs. Suzuki, an absolutely brutal fight that mostly consisted of the two of them standing toe-to-toe and hitting each other as hard as they could.  Just insane strikes in this one.  Ishii outlasted his sadistic opponent to retain the RPW Title.  I'm curious if he'll get to defend it again at the Dome (hopefully against someone like Sabre?).

Hirooki Goto regained the NEVER Openweight Title in another stinker against Taichi.  I'm really not sure what they were thinking putting that belt on Taichi, who's a good chickenshit heel character but all wrong for the NEVER belt.  Goto needs a good opponent for the Dome so that title can get back on track.

The final piece of big news from Power Struggle was RPG3K winning back-to-back Super Jr. Tag tournaments, setting up a rematch of the three-way finals at WrestleKingdom.  Kind of odd that Bushi & Shingo would be included in the Jr. Tag Title match since they lost here, but I'm okay with it.  I called it in my predictions that no matter who won here we'd likely see a rematch at the Dome.

With that, New Japan has announced half the WrestleKingdom 13 card and it's looking quite stacked as always. 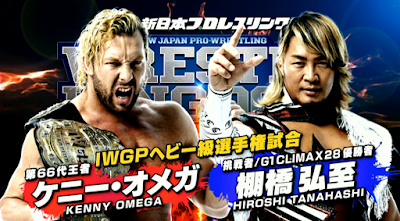 Kenny Omega vs. Hiroshi Tanahashi for the IWGP Title

Chris Jericho vs. Tetsuya Naito for the IC Title

Kushida vs. Taiji Ishimori for the Jr. Title

SZGN vs. RPG3K vs. Bushi & Shingo for the Jr. Tag Titles

That's a pretty great start.  We need a NEVER match for Goto, a Guerrillas of Death-Young Bucks rematch, a US Title match for Cody, and as I said, hopefully an Ishii-Sabre RevPro Title match.  Oh, and something for Kota Ibushi.  As always, WrestleKingdom looks to be a surefire PPV of the Year nominee right out of the gate.

Sweet fucking Christ.  I didn't even watch this show, nor do I intend to, but I kept up with the results online as it was happening, and Crown Jewel has to be a lock for the worst major show this year, right?  A whole lotta nothing matches, nonsensical booking, and a main event between four 50-year-olds that went 28 minutes (Shawn, I love ya but you gotta hang it up, dude).  Did WWE purposefully deliver the worst possible show for the Saudis as a big "fuck you?"  If so, more power to them I guess.  There was apparently no propaganda like there was in April, and by all accounts every match was completely skippable, plus their Best in the World tournament went to a non-wrestler who wasn't even booked in it.  It takes strenuous effort to put on a show this bad.  I guess the idea is to turn Shane McMahon heel.  Oh good, just what we need, ANOTHER heel authority figure.  They've been regurgitating this formula for literally 20 years now.  Vince's retirement can't come soon enough; the man is plum out of ideas. 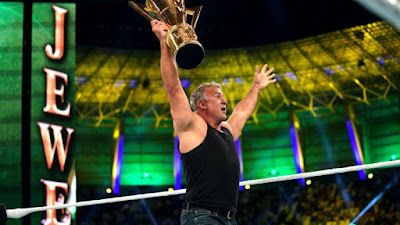 The one good bit of news coming out of this show is Brock winning the Universal Title again, and that's only because we get a Brock vs. AJ Styles rematch at Survivor Series.  I for one certainly wasn't excited about the possibility of AJ vs. Strowman, so this was fine with me.  And considering Brock is on his way out the door still, AJ has to win this time, right?  Like, having Styles job to Brock two years in a row would be unreal stupid.  Give AJ a hard-fought win over Brock and it'd be huge for him.  Then at the Rumble or whatever you have Brock drop the belt to Braun or Seth.

Survivor Series is actually looking really strong so far.  Besides AJ vs. Brock they've announced Ronda Rousey vs. Becky Lynch, and even more exciting for me, Shinsuke Nakamura vs. Seth Rollins.  Barring any title changes before then that's a great foundation for this show.  They still need to put together two 5-on-5 matches, one of which I'm sure will involve Shane again (Yawn), but I'm hoping they can do better than last year's fiasco of a main event. 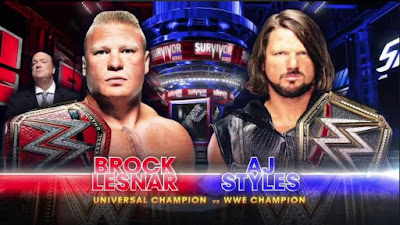 Something like Braun, Balor, Ambrose, Ziggler and Drew vs. Bryan, Orton, Joe, Miz and Rey Mysterio would be pretty excellent.  Make it happen.  The women's match should be Sasha, Bayley, Nia, Alexa and Mickie vs. Asuka, Charlotte, Naomi, and the Iiconics I guess?  Anyway Survivor Series could be one of the few bright spots on WWE's calendar like it was in 2016.  I'm sure they'll fuck it up like they almost always do, but I can dream....