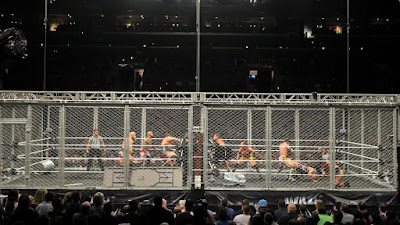 The show opened, unexpectedly, with the originally planned Matt Riddle-Kassius Ohno match, which Triple H admitted publicly was never off the table; rather he didn't want to advertise it and have people pissed off that it only went six seconds.  Thus it was "pulled" from the show so when it did end after one move, the crowd would see it as a bonus match instead of a ripoff.  Riddle cut a promo and challenged Ohno to meet him in the ring for a match, Ohno acquiesed and then ate a running knee, followed by the three count.  This was literally the first Riddle match I'd ever seen, so I'm looking forward to watching him in a full-length match.  NR

The first proper bout was the 2/3 Falls match between Shayna Baszler and Kairi Sane.  This was, shall we say, underwhelming.  The action was intense and nonstop, but for a 2/3 Falls match to only go eleven minutes is criminal.  Sane got attacked on the outside by Baszler's two pals Jessamin Duke and Marina Shafir, and fell victim to Baszler's rear naked choke at the two-minute mark.  Sane evened the score only minutes later following an Insane Elbow, but after a ringside brawl involving Duke, Shafir and Io Shirai and Dakota Kai, Sane went for another elbow but got rolled up for the third fall.  Baszler retained and it looks like we'll get a six-woman tag in the near future.  Baszler and Sane work wonderfully together, but for a blowoff of sorts this match deserved to be twice as long.  ***

The rest of the matches on this show were all above ****.

Aleister Black and Johnny Gargano put together an incredible, fast-paced war that went 18 minutes and had nary an ounce of fat.  The strikes on display were crisp and stiff, and both guys looked amazing.  Gargano played the role of the babyface who's lost his way and let his obsession destroy him.  The feud with Tomasso Ciampa poisoned his soul and now he is a violent maniac.  Gargano is fantastic in this persona.  Black was out for revenge and made Gargano pay for his transgressions without coming off as sadistic.  The finish involved Black hitting a Black Mass and holding Gargano upright for a moment just so he could hit a second.  An excellently worked match, and I wonder if we'll see a triple threat with these two and Ciampa in January.  ****1/4 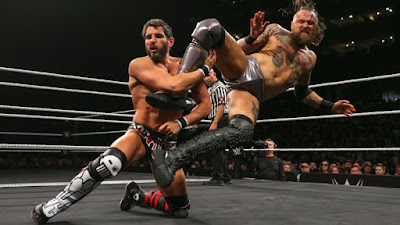 The surprise smash-hit of the night was the NXT Title bout pitting Tomasso Ciampa vs. Velveteen Dream.  This was nearly as action-packed as the previous match but had even more drama, as Dream made everyone believe he might do the impossible, hitting the Purple Rainmaker and the twisting DDT for razor-thin near-falls (in addition to aping Hulk Hogan's finishing sequence).  After missing a second Purple Rainmaker on the apron and crashing on the floor, Dream was ripe for Ciampa to roll him into the ring and spike him with a draping DDT on the metal plate between the double-ring for the win.  Fantastic title match with a ton of dramatic near-falls that was way more suspensful than anyone anticipated.  ****1/2 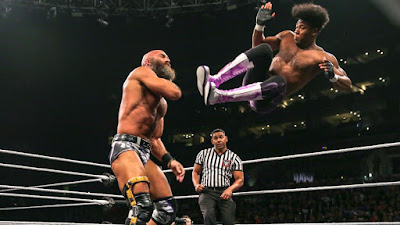 This main event was the WarGames match I was hoping to see last year.  I found the 2017 edition overly messy and hard to invest in, not to mention they used the ill-conceived 1998 version as the template, with three trios instead of two teams of 4 or 5.  This year they brought the concept back to its roots, with two teams of four, each of which resembled one side of the Horsemen-Dusty/Nikita/LOD feud.  With that structure in place, this match was free to be the kind of epic match you didn't want to see end.  Each new entry got time to shine, while the Undisputed Era made good use of the one-man advantage.  The second half though is where the war really took off.  All eight men got to do some wild spots involving multiple tables, a tower of doom off the top of the cage, Ricochet hitting a 720-degree reverse senton (absolutely BONKERS), and more.  One of the best moments involved a team standoff in the space between the two rings - just a great visual that served as a reset of sorts and captured the drama of the battle.  The match ended after 47 minutes (that felt like 30) when Pete Dunne hit the Bitter End simultaneously with Ricochet's shooting star press on Adam Cole for the win.  This was an amazing spectacle that, as I hoped, redefined WarGames for the 21st century in a way last year's didn't for me.  I loved this match.  ***** 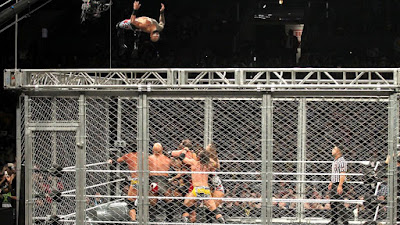 NXT continues to be a joy to watch, and this show was a damn near perfect night of wrestling.  Had the women's match gotten more time this would be an easy 10/10.  WarGames II has to be on the short list for greatest TakeOver special of all time.

Best Match: WarGames
Worst Match: Riddle vs. Ohno
What I'd Change: Like I said, give the women ten more minutes and you'd have a perfect show.
Most Disappointing Match: Baszler vs. Sane
Most Pleasant Surprise: How good the NXT Title match was
Overall Rating: 9.5/10

Posted by Justin Enuffa Ballard at 9:11 AM