Welcome to another edition of Awesomely Shitty Movies, here at Enuffa.com, where I'll examine a movie I have mixed feelings about and separate what works from what doesn't.  Today's entry is the monstrously violent political satire from Paul Verhoeven called Starship Troopers! 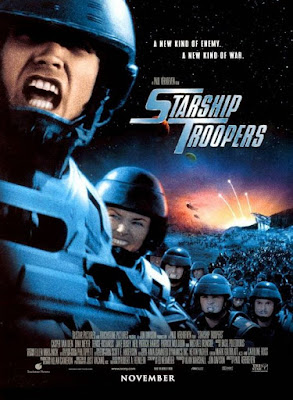 The 1997 film was based on Robert Heinlein's 1959 militaristic, rather pro-fascist novel about a group of high schoolers who enroll in the military to wage war against an army of alien "bugs."  In the novel the main character Johnny Rico has a fairly triumphant arc, becoming a respected officer and leader as the war wages on.  The film however has a decidedly satirical thrust, mostly poking fun at the very subject matter on which it was based.  On the surface this movie seemed like the usual alien invasion sci-fi/action tripe, but as he did with Robocop, Verhoeven created something much more substantial and sociopolitical.  He got a lot of things right with this film, but while Robocop is basically perfect for what it is, Troopers unfortunately leaves some things to be desired.  So let's take a look at this Awesomely Shitty Movie....

The militaristic tone and pro-meritocracy slant (having to earn full citizens' rights) of the novel are cleverly satirized by director Paul Verhoeven in a way that rides the line between honoring and lampooning Robert Heinlein's work.  In fact Verhoeven found the novel unreadable and still managed to make a capable film adaptation.  The officer uniforms are also clearly inspired by those of Nazi officials, and the propaganda films shown throughout are flagrantly a riff on Nazi indoctrination such as Triumph of the Will.  Structurally this film is strikingly similar to All Quiet on the Western Front, following a group of high school kids (who in this case seem lifted right out of 90210) who get duped into enlisting and have horrible things happen to them.

Like with Robocop, Verhoeven sprinkled (or more accurately slathered) this movie with over-the-top, graphic violence which becomes both disturbing and oddly amusing.  There are countless battle scenes with humans being stabbed through various body parts by the bugs' spear-like legs, and plenty of scenes depicting bugs being inefficiently blown to gooey pieces by the soldiers.  Plus there's the climactic scene where the brain bug sucks Zander Barcalow's brain out through his skull.  It's not for the squeamish, but man is it entertaining for us sick folk (fucks).

Going hand-in-hand with the hyper-violence is the film's overwhelmingly bleak tone (when you really stop and think about it).  The story begins with a group of naive high school students who buy their government's fascist ideology hook, line and sinker.  They enlist in the military, fight a pointless, attritive war, the two romantic leads each fall in love with other people who both die, and the psychic kid becomes essentially an SS officer.  By the end of the film all the main characters have blissfully accepted their fate as tools of this authoritarian, militaristic regime and become part of the government's marketing campaign to recruit more young kids to be shipped off to their horribly violent deaths.  What a downer, man....

I've enjoyed Dina Meyer's work in several things (She was on a few episodes of Friends and in the Saw movies for example), and I liked her a lot in this.  She struck me as the most relatable character, Johnny Rico's tomboyish classmate Dizzy, who secretly pines for him as he's busy chasing Denise Richards.  Eventually Johnny and Dizzy finally hook up, and it feels like a well-earned romance.  Of course then Dizzy gets killed, thus robbing the movie's third act of what I felt was the strongest character.

Before he was the perpetually awesome Barney Stinson on How I Met Your Mother, Doogie Howser played the hyperintelligent, psychic Col. Carl Jenkins, one of his earliest film roles.  Jenkins has the ability to mentally communicate with the bugs and is quickly promoted as an officer, and Harris ably embodies this character, making memorable what little screen time he has.

Also like Robocop, Starship Troopers includes several snippets of futuristic TV/interactive streaming shows, including propaganda designed to attract new recruits, talk shows discussing the merits of insect intelligence ("I find the idea of a bug that thinks offensive!"), and other newsreel-type footage of the various battles.  This highly detailed world-building helps immerse the viewer in this strange universe and I'm always a sucker for stuff like this.  Additionally I appreciated the scenes dealing with basic training, where Johnny struggles to fit in with his unit but eventually proves his worth.  This stuff was, again, reminiscent of All Quiet on the Western Front, but this time with giant bugs.

I wasn't crazy about the two leads in this film.  Casper Van Dien far too often seems like a dimwitted deer in headlights, and maybe that was by design.  But for me it made it hard to really like the Rico character and thus tough to identify with him.  When the hero is kind of a dope and is only partly brought to life it takes me out of the film a bit.  I get that he's supposed to be a vapid everyman, but when you cast someone as pretty as Van Dien that sorta undermines this idea.  Someone like Mark Wahlberg may have given Johnny more depth.

The same is true of Denise Richards' performance.  I never really liked the Carmen character to begin with - she dumps Johnny to date Zander and sorta keeps Johnny on the hook the rest of the movie.  And in the hands of a stronger actress this could've been a pretty compelling, conflicted character.  But Richards sorta plays her as this ditzy waif and I didn't really believe Johnny would still pine for her over Dizzy, nor did I fully believe her as a capable starship pilot.  She just didn't seem gritty enough.

Just about every late 90s film that featured any CGI had at least one or two effects that looked terrible, and Starship Troopers is no exception.  The "soldier" bugs look pretty good, as though they take up actual physical space, but the brain bug at the end looks quite like a cartoon, with its gelatinous, flab-covered body rippling to and fro.  This was an era when filmmakers began tackling blood and gore using CG, and this approach has never looked as good or tangible as practical effects.  To be fair, this film also has very strong model effects work, I'm just talking about a few places where the early CG didn't work for me.

This era gave us an insane number of alien movies, most of which were knockoffs of either War of the Worlds or Alien.  Independence Day, Mars Attacks, Alien Resurrection, Deep Rising (Yeah I know that was sea creatures, but it's basically Alien underwater), hell even Men in Black was about humans vs. aliens.  Starship Troopers was among the best of this crop of crappy sci-fi flicks, but still - how many alien movies do we need over a two-year period?  Still, this movie was a way better sequel to Aliens than Alien 3 was.

-Wait, you're using machine guns to kill giant bugs?  Why not just spray the entire fucking planet with Raid?  How many rounds did these fools spend taking down just one of these rhino-sized monsters?

-So the main characters are from Brazil and three of them have Hispanic names, yet they're all basically Aryan poster people.  I guess that was part of Verhoeven's strategy to mock this right-wing utopia?  Either that or it's the worst case of whitewashing since Benedict Cumberbatch in Star Trek Into Darkness.  Wait, reverse that....

-Are we supposed to believe that the dopey Johnny Rico was accepted to HARVARD?  And he turned it DOWN to go fight bugs??  Johnny my boy, you're never gonna find a better deal than Harvard.

-Furthermore, are we supposed to believe the 29-year-old Patrick Muldoon is a high school student??

Truth be told there's much more Awesome about Starship Troopers than there is Shitty.  It's well-acted and directed for the most part and the satirical elements are thought-provoking and often hilarious.  But it just doesn't quite come together for me like it should.  Somewhere in there is a truly great sci-fi political commentary.


Well that wraps up this week's ASM.  Thanks for reading, and comment below!

Posted by Justin Enuffa Ballard at 10:45 AM