At long last we're back with another edition of Awesomely Shitty Movies, here at Enuffa.com!  For those unfamiliar, I take a popular (or not so popular) film, pick it apart, separate the good stuff from the bad stuff, and more or less ruin it for everyone.  Sooo, let's get after it.... 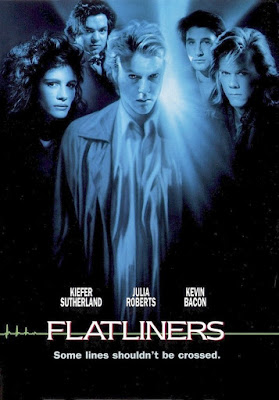 Today I'll be talking about the 1990 suspense thriller Flatliners, starring Kiefer Sutherland, Kevin Bacon and Julia Roberts, and directed by Joel Schumacher.  The premise involves a group of medical students who each decide to briefly experience death, hoping to prove once and for all what happens in the afterlife.  But each character unwittingly brings something back with them, and they all end up haunted by demons from their past.  Flatliners got mixed reviews but made a solid profit upon its release and later became a bit of a cult favorite.  Aaaand therefore Hollywood released a remake sequel a few years back.  Just fuckin' shameless, those people.....

But does the film actually work?  Let's take a closer look.

The whole cast is quite good in this film, from Keifer Sutherland's turn as the tormented visionary and original "flatliner" Nelson Wright, to Kevin Bacon as the likable pragmatist David Labraccio, to Julia Roberts as the generous and gentle Rachel Manus, to Oliver Platt and William Baldwin as the sarcastic worrier Randy Steckle and the hopeless horndog Joe Hurley, respectively.  Each actor gets clear territory to explore, and each of them brings their character to life admirably.  The two standouts are Sutherland and Bacon, who begin the film as best friends and gradually become romantic rivals as the story progresses.  I especially like the scene when they all confront Nelson outside David's apartment and all the cards are laid on the table.  Solid work all around.

Schumacher and Director of Photography Jan de Bont fill the frame with a visual richness and atmosphere that lends itself to the material and the mood.  Chicago's Loyola University served as the bulk of the film's locations, giving everything a very old-world, gothic feel.  The breathtaking opening helicopter shot for example takes the viewer across Lake Michigan right up to Kiefer as he stands on West Devon Ave.  This is a fine-looking film.

The whole idea of a med student voluntarily dying so he can be revived with the secrets of life and death is certainly intriguing and creative.  It's oddly relatable on some level - who wouldn't want to know what lies beyond and live to tell about it?  Not to mention it's ripe material for farming cinematic suspense.  After all, reviving someone who's clinically dead is no exact science and there's little room for error.  The film doesn't explore this theme nearly as effectively as it could have (more on that in a bit), but the initial story idea was pretty inspired.

So some things about Flatliners work quite well.  Now let's see what doesn't....

Flatliners is sadly rife with cheesy one-liners and trailer fodder, like "You threw your career away on a stranger, now you're turning your back on a friend," "Die to be a hero someday if you want to, but don't die to be a celebrity," "I don't wanna spoil anyone's evening, but are we in the room with a dead man?"  Surely a concept so lofty should be explored with dialogue to match, no?  I know we gotta sell tickets to teenagers and all, but jeezus, throw in some grown-up speechifyin'!  This ain't The Lost Boys, ya know.

The scientific stretches on display in this film are ludicrous.  For one thing the experiment in question involves lowering the body temp, shocking the heart to achieve flatline, and injecting the subject with drugs that will result in "brain death."  Look, I'm no doctor, but I'm pretty sure if a person's brain is actually dead they are now past the point where they can be revived.  People who have clinically died for a few minutes weren't BRAIN dead.  Thus whatever the patient perceives during those few minutes still involves brain activity.  Thus this experiment proves zilch about what actually happens after you die.  Also in the climactic final experiment where the gang tries to get Nelson back, he's been under for like twelve minutes.  Now you're just being absurd.  That dude's fuckin' dead, kids.

After the first half hour the film sadly devolves into repeating the same scene over and over.  We see this exact same experiment literally FIVE TIMES, as Nelson and three of his cohorts go through it with the exact same results.  How many different times do we have to watch the same goddamn scene?  It also doesn't really ratchet up the suspense, since after the first couple times we know exactly where it's going.  Subject dies, his/her resuscitation takes way longer than expected, and he/she is haunted by persistent visions related to some guilt from his/her past.  Ok guys, we get it.  You can skip to the third act now.

I said earlier that the initial concept was inspired.  Unfortunately the story execution beyond, isn't.  Flatliners could've really taken a deep dive and examined what people experience when they die, what causes them to have these visions, how they feel about what they went through, how their experience affects their loved ones, etc.  Instead it becomes a haunted house movie, where each character effectively starts seeing ghosts and has to figure out how to get rid of them.  Kinda disappointing if you ask me - the film takes approximately zero unexpected turns with such provocative material.

-At the beginning of the movie after Dave gets suspended from school he's having a conversation with Nelson out his third-story window, after which he tosses his packed bag to the ground and then climbs down a rope.  Does that building not have stairs?  It's a visually creative way to block this scene but that's a little contrived.


-Nelson's first ghostly vision (of his crippled dog Champ) is bathed in blacklight and the alley walls are covered with graffiti.  Thus began Schumacher's obsession with this garish lighting effect, which would rear its cheeseball head again in the two Batman films he directed.

-Speaking of lighting, why is the lighting so poor at this school?  Early in the film we see the students about to take an anatomy exam and the scene is lit like Frankenstein's laboratory.  Seems a bit unfair to expect the students to pass such an important exam when they can't even see the cadaver's organs properly.

-Throughout the film Randall Steckle is a panicky naysayer who tries to talk the group out of every experiment, even DURING the experiment.  So why does he keep showing up to these things?  Even in the first one he tries to talk the others out of going through with it, but he doesn't actually do anything to stop them, nor does he leave.  As much as I enjoyed Oliver Platt's performance, the Steckle character becomes pretty pointless after a while; he doesn't even really help out with the experiments, he's just sorta there.

-He's not the only one guilty of flip-flopping either - at some point they all say "No one is going next, it's getting too dangerous," yet they all keep coming back for the next one.  Pick a fuckin' side, guys.  "No one is going for four minutes, you're crazy!.......Yeah, I'll be there tonight...."

-Each of the flashback scenes where Billy (and later Nelson) falls out of the tree are handled in a very toothless, non-threatening way.  I get that they were trying to augment the moment of falling by having it take forever, but there was just nothing very unnerving about it.  The actor is clearly hanging from wires with a fan blowing on him.  Maybe Billy should've died in a more gruesome fashion.

-When Dave undergoes the experiment Nelson begins toying with the others, like he sorta hopes Dave doesn't make it back so he can have Rachel all to himself.  Is this really believable?  Nelson doesn't exhibit homicidal tendencies toward Dave at any other time in the film.

-Wait, so each of the characters has to atone for their sins right?  David called a girl a buncha names as a kid, so he makes up for it by apologizing to her as an adult.  Joe's fiancee finds out about his weirdo habit of videotaping his various sexual escapades (Keeping incriminating tapes of yourself cheating on your bride-to-be?  What are you, Horny Nixon?  Actually I guess Dick Nixon would be accurate....) and she leaves him.  But Nelson and Rachel's respective "ghosts" are both deceased.  Nelson has to die again to make amends with Billy Mahoney (makes sense if the kid's dead), but Rachel just gets to have a vision of her father apologizing to her for shooting himself and then she's alright again?  That don't make sense.  Fuck kinda rules you got set up here??  Nelson got the shaft, says I.

-As I mentioned, Joe has a shelf full of sex tapes that he keeps apparently in plain view.  Considering he's engaged, and also considering he's always bringing girls back to his apartment, you'd think he'd maybe keep them in a more discreet location than "for all to see."  How had he not been caught sooner?  An entire shelf of mini-8 tapes labeled with women's names?  Yeah, nothing to see here....

-Why does Nelson have this expansive, empty apartment with fancy baseboard lighting?  Were his parents rich?  Everyone else's apartment is pretty modest.  Steckle's looks like someone died in it a year ago and no one cleaned it up.  Ironic considering he's the only character who DOESN'T die.


-How exactly is Billy Mahoney physically attacking Nelson if he's just a vision?  This is never explained, despite Steckle pointing out that it's not possible.  It's not every day a character in a movie actually calls attention to a plot hole!

-Nelson, Joe and Randy drive to the cemetery where Billy is buried and Nelson steals Joe's keys and runs off.  Joe and Randy then halfheartedly chase him for several yards before just stopping.  A+ for effort though guys...

-So Nelson decides he needs to die in order to make amends with Billy, right?  Since he abandoned the others and flatlined himself, it sure seems like he doesn't wanna be saved.  Why then would he choose that method of taking his own life?  Why not something more permanent, where the others wouldn't be able to revive him?  Or was this one of those "cry for help" things?

-In that last scene, why's it so goddamn windy in there?

-That's gotta be the most useless defibrillator ever made.  Not once does it successfully revive anyone, except at the very end after Nelson's been dead for like twelve minutes.  Every other time they have to resort to CPR.  I hope that sumbitch is still under warranty.  Maybe it has a label on it: "Do not attempt to use unless the patient is already hopelessly fuckin' dead."

Flatliners is one of Schumacher's good films, but it's still got a lot wrong with it.  A very thought-provoking premise is largely wasted on a repetitious, paint-by-numbers plot.  Fortunately the cast was strong and the film is visually striking, otherwise there'd be nothing going on here.  But just imagine how great a movie like this could've been in the hands of a more adventurous director.  Like Schumacher's The Lost Boys, this film is competently-made fluff that really should've been much more.

Posted by Justin Enuffa Ballard at 8:44 AM