Welcome to another installment of Awesomely Shitty Movies, here at Enuffa.com! 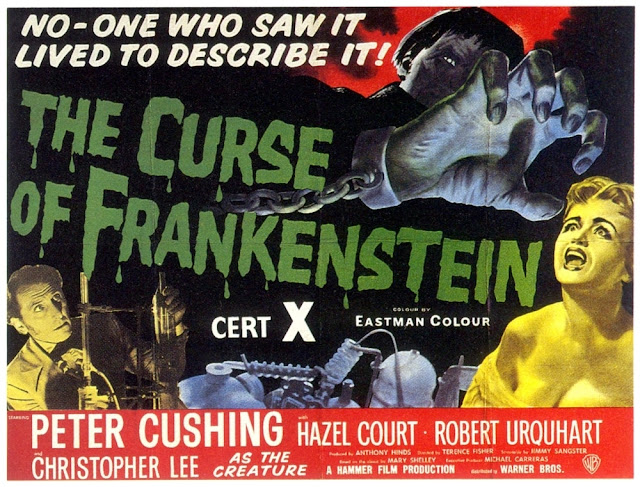 It's about that time - Halloween season is upon us and therefore it's time to watch some horror movies and pick them apart, even if they are cult classics.  Today I'll be discussing the Hammer Films adaptation of Mary Shelley's gothic horror milestone, entitled The Curse of Frankenstein.  Released in 1957 and shot on a very modest budget, TCOF more or less kicked off Hammer's successful series of horror films, leading to not only a slew of Frankenstein sequels but also a Dracula series and others.  Hammer was to 1950s horror cinema as Universal was to the 1930s, adapting many of the same properties but shooting them in color and in far more graphic detail, but in my opinion sacrificing the gothic atmosphere Universal had established.  The Curse of Frankenstein launched the film careers of both Peter Cushing as Victor Frankenstein and Christopher Lee as the monster (Hammer's makeup department had to work hard to differentiate their creature from Universal's so as to avoid legal action).  The film was a smash-hit (grossing $8 mil on a $250,000 budget) and of course spawned numerous follow-up installments while putting Hammer on the map as a preeminent horror film studio.
But is The Curse of Frankenstein any good?  This was my first time viewing it, and well, here's what I thought....
The Awesome
Peter Cushing 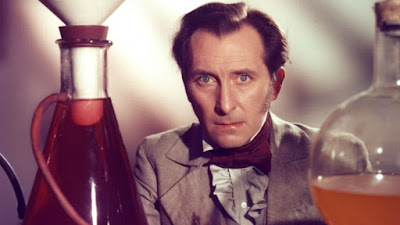 Now-legendary English thespian Cushing was primarily known as a TV actor prior to this film, and understandably became a big star due to its success.  Cushing enjoyed regular work as both Victor Frankenstein and Dr. Van Helsing over the next two decades and of course landed maybe his biggest role twenty years after this film, playing Grand Moff Tarkin in the original Star Wars.  His work here is quite capable, conveying Victor's wide-eyed enthusiasm-turned-sinister obsession with creating a man.  Cushing starts out dignified and optimistic and gradually descends into murderous madness, stopping at nothing to realize his ambition.  The script perhaps takes the latter a bit too far, as I'll get into in a bit, but as far as an acting performance, Cushing is very good.
Nods to the Novel
I was glad to see Dr. Frankenstein with the correct first name here unlike in the Universal version.  His mentor-turned-partner Paul is given the last name Krempe as a nod to one of Victor's professors in the book, his maid/mistress is named Justine after Justine Moritz, and the creature's creation sequence seems perhaps a little closer to what Mary Shelley envisioned than the over-the-top electrical show as depicted in the 1931 film.  Likewise the creature's makeup design is something closer to Shelley's description than Jack Pearce's iconic look (with a pretty obvious nod to Max Schreck's wardrobe in Nosferatu).  So it was nice to at least see aspects of the novel acknowledged, if not followed closely.
Creation Scenes 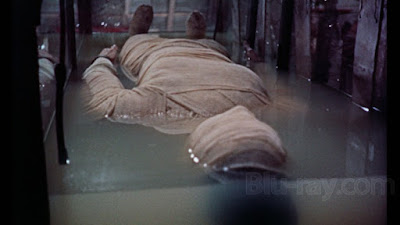 As mentioned, the creation scenes are a bit more like what Shelley wrote, even if the film takes far too long to get to them.  Victor builds the creature piece by piece, stealing a body from the gallows, buying pieces from charnel houses, assembling the creature as he goes, and the script has him preserving it in progress by submerging it in a tank of fluid (interestingly the 1970s Marvel Comics adaptation, of which I was a big fan, takes cues from this movie rather than the Karloff one).  The creature's first appearance is sort of jarringly frightening; Victor hears a commotion from the other room and bursts into his lab, and the camera jerkily closes in on the mummified creature, who rips off his bandages to reveal his hideous face.  The rest of Christopher Lee's scenes are unfortunately not handled very well at all, but this moment was well done and reminded me a little of Leatherface's first appearance in the original Texas Chain Saw Massacre (I wonder if this film influenced Tobe Hooper).
Okay, unfortunately I have a lot more to complain about than to praise with this film.
The Shitty
Christopher Lee 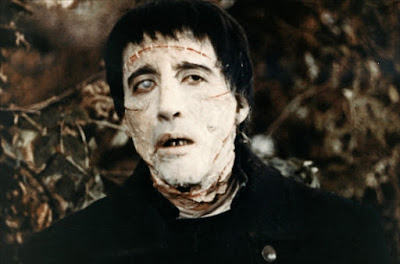 Say what you will about Christopher Lee.  He's a horror film icon and one of the all-time great screen Draculas.  But in the role of the Frankenstein monster he's 100% miscast.  Lee's strength as an actor was a certain dignified presence, and in this role as written he doesn't get to convey any of that.  He has no dialogue, nor even really any primal grunts.  He just stands there silent and awkward almost the entire film, attempting to let the makeup do all the work.  Boris Karloff was able to do a lot with very little, Lee unfortunately doesn't succeed here beyond the shock of his first appearance.  Cast mostly because of his 6'5" stature, it seems like the filmmakers didn't look much beyond that qualification.  Of course not all of this is Lee's fault, the creature isn't given much at all to do in this movie.  Which brings me to...
Creature As Written 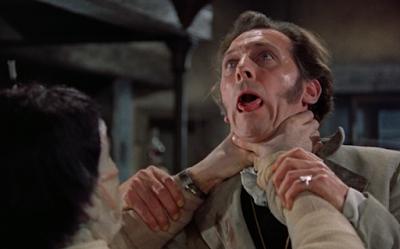 When offered the role of the monster in the 1931 version, Bela Lugosi turned it down on the grounds that the character was nothing more than a one-dimensional, senseless killing machine, allegedly quipping, "I'm an actor, not a scarecrow."  While said character evolved quite a lot by the time Karloff took the part, the Hammer version can be described almost exactly as the type of role Lugosi turned down.  The creature in this film is mute, murderous without reason, and completely devoid of any pathos.  We're given no reason at all to feel sympathy for him and he doesn't get any sort of character arc.  He's just a warm body, so to speak, to give Victor an obsession over which to forsake all else.  In the first Karloff film, despite being given a criminal brain (a silly touch), the monster is still somehow sympathetic.  He feels joy playing with the little girl and fear and remorse over accidentally drowning her, and later we feel for him as he's trapped under a beam in the burning windmill.  Lee's creature is just a thoughtless brute whose first instinct is to strangle everyone he comes in contact with.  Why not take cues from the novel and make him an eloquent beast so at least there's a character we can identify with?  Because....
No One to Root For 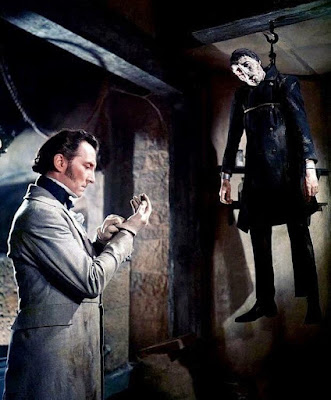 This version of Victor Frankenstein is an awful person.  He's so intent on creating a man he uses then alienates his only friend Paul, murders his mentor Professor Bernstein, more or less ignores his fiancee Elizabeth, and has the creature dispose of his mistress/servant Justine.  Victor is the full-on villain in this movie, which basically leaves no one for the audience to root for, since the creature is just a murderous freak show.  If you want to successfully adapt Frankenstein you need to make at least one of the two main characters relatable.  Either Victor needs to be a misguided but ultimately noble person, or the creature needs to be a tragic figure, brought to life and then abandoned by his creator, and just searching for companionship.  But in this version both characters just suck, and we don't identify with either of them.  The closest thing this film has to a main protagonist is Paul, who just comes off as a cuck, teaching Victor everything he knows and then enabling his worst impulses for a while, before jumping ship.  But then the guy keeps coming back whenever Victor wants to confide in him.  So the choices for a chief good guy are the megalomaniac, the mindless killer, or the doormat best friend.  It's almost like TWO monsters are created in this movie - Paul creates Victor, and Victor in turn creates the monster.  Trippy...
Sssssssssllllloooowwww
Aside from all that, the film's first half is a major slog to get through.  We spend so much time with Victor prepping the big experiment, intercut with establishing his neglect toward Elizabeth and Paul's resentment of it, that the creature doesn't make his first living appearance until halfway through the movie.  I found myself going "Jesus man, just put the brain in and get on with it!"  By the second half of the film it had been so thoroughly established what an asshole Victor was that I didn't really want to spend another forty minutes with him.
Lighting 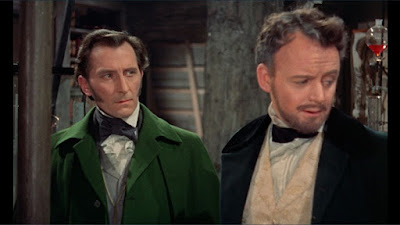 This is partly a product of the film's scant budget but also of the time it was made - 1950s and 1960s lighting in color films more often than not looked terrible, like that of a school play.  Bright overhead and spot lighting makes everything kind of uncomfortable to look at, like the filmmakers didn't trust the audience to be able to process the imagery on their own.  "HEY EVERYONE, HERE'S VICTOR AND PAUL, AND AN OPERATING TABLE, AND SOME EQUIPMENT BEHIND THEM!!!"  Stuff like this really takes me out of a movie; if there's no tastefulness or style put into the visuals I sometimes have a hard time maintaining interest in the story.
Nitpicks
-What's with all the brightly colored liquids in Victor's lab?  Is he making people or brewing Kool-Aid? 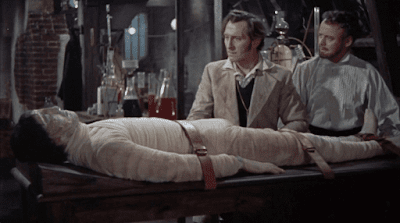 -There's a shot of the monster as he approaches the old man in the woods and the edge of Lee's makeup is clearly visible, leaving a thin strip of un-made-up neck visible over his collar.  I know this was shot on a budget, but Jesus guys, couldn't you have extended the makeup below the guy's collar?  That's Prosthetics 101.
-Paul knows with basically 100% certainty that Victor murdered his former mentor just to get at the guy's brain, yet Paul keeps showing up to Victor's house to check on him.  Maybe it's time to cut the guy loose, huh?  I know you're worried about Elizabeth but at a certain point she's gotta figure out for herself that she's marrying a malignant narcissist.
Conclusion
I know this film is considered something of a horror classic but I can't get behind it.  Horror of Dracula has many flaws as well but at least the "monster" in that film is well-written and perfectly cast, while Peter Cushing's portrayal of Van Helsing is heroic and clever.  In this film there's no central protagonist and the monster isn't given anything good to do; he just lumbers around looking vaguely scary, until he doesn't.  Coming 26 years after Universal's Frankenstein you'd think this film would've made advancements in some way, but nope.  The makeup and production values look cheaper and the special effects are less convincing, while the script doesn't find much new ground for the actors to explore.  Pretty piss-poor adaptation overall if you ask me.
Thanks for reading - subscribe to our mailing list, and follow us on Twitter, MeWe, Facebook and YouTube!
Posted by Justin Enuffa Ballard at 3:39 PM