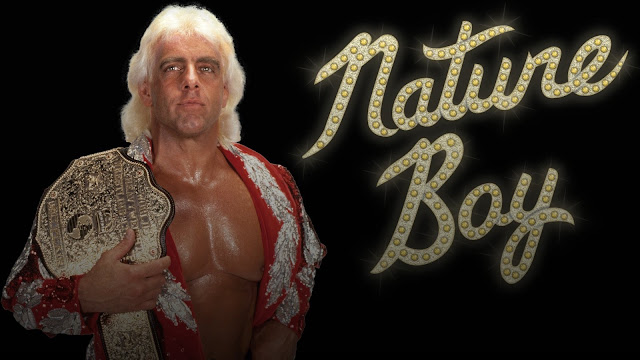 This man is not only a wrestling legend but he has transcended that stardom in the squared circle to become one of life's superstars. Everyone knows who Ric Flair is. Everyone knows what his bedazzled robes look like. And of course we all know his signature catchphrase--'WOOOOOO!'

But what about the man? This documentary gets in to the man...kind of. It's definitely more about the playboy persona of RIC FLAIR WORLD CHAMPION but it does give some insight into Richard Fliehr, the adpoted son of strict, tie wearing parents. It delves into how young Richard loved wrestling but his father wanted nothing to do with it...and that's it. It's barely five minutes of talking about Ric's childhood and lack of interest from his parents. There's clearly more to the story there as you can see it affected Ric greatly but the director chose to move on from that pretty quickly I thought.

We then move onto his wrestling career and man oh man did this guy do some hard living. There's a scene (some scenes were animated when Flair was telling stories, as this one was) where he describes his daily intake of booze. 10 beers and 5 mixed drinks everyday he worked. Well, he's a wrassler, and he worked everyday so he drank that amount EVERYDAY. 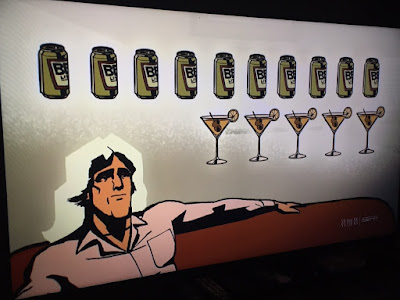 The wrestling stories are great. They talk to a bunch of his best opponents. Ricky Steamboat talks about how great their matches were. Hulk Hogan, in a rare display of humility, says Flair was a million times better than him and how Flair could wrestle circles around Hogan. Triple H talks about how he helped Flair really get back to being the Nature Boy (he's also brutally honest about what a huge liar Flair is and how much denial the man is in).  It's really cool to hear these dudes talk about the old days and how much the lifestyle affected them.

Where it's most lacking is in the personal side of Flair. The filmmakers are so enamored with the superstar Ric Flair that they gloss over his personal life way too much. And it's a shame because seeing this large as life character as more of a person would truly help to understand him a bit more. Towards the end of the film they get into his life's greatest tragedy, the death of his son Reid, who was also a wrestler. It got dusty in the room at that point. Just awful to hear a father talk about losing his son. Flair shows a vulnerable, loving side to himself. A true rarity. But that human side was few and far in between, unfortunately.

He bounces back, though, talking about how proud he is of his daughter Ashley, better known as Charlotte in the WWE. A multiple time woman's champion, you can really see him get back into it when he's talking about wrestling. And that's who the man is - he's Ric Flair, World Heavyweight Champion. His life is in between the ropes and in the bars after the lights have shut off in the arenas. There is no in between with him. He truly is The Nature Boy.

Overall the movie is incredibly enjoyable. Ric Flair is a naturally charismatic man. You hang on his every word and you wish that he would tell stories for days. I highly recommend watching this regardless if  you're a wrestling fan or not. It's quite a story about a larger than life guy. Diamonds are forever and so is Ric Flair.