Wow, what a show, both in terms of match quality (three ****+ matches to close the PPV by my calculation) and perhaps more significantly in terms of setting up WrestleKingdom 12.  NJPW Power Struggle is likely to be remembered at least as much for its post-match angles as for its matches, with Tokyo Dome bouts set up for the Jr. Tag belts (RPG3K vs. Young Bucks is sure to be spectacular), the Jr. belt (if you're doing a Fatal 4-way these are the four guys you want), the Intercontinental Title (the push seems a little sudden but I've been eagerly awaiting Jay White's return to the company), and one of the most earth-shattering announcements in New Japan history, Kenny Omega defending the US Title against Chris Jericho! 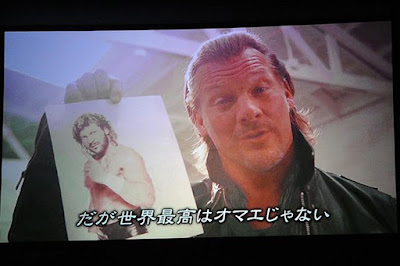 This is simply huge.  That an 18-year WWE veteran has jumped ship to New Japan indicates a potentially seismic shift in the industry the likes of which we haven't seen since WCW came knocking on Vince's door back in 1995.  For the first time since the Monday Night War, a very relevant WWE fixture has willingly decided to try his hand in a different company that currently has a major buzz around it.  For a wrestler at this stage of his career to yearn for a new challenge rather than taking the easy, reliable paycheck is remarkable, and it illustrates how much hotter the New Japan brand is right now than WWE (not to mention how committed Jericho is to reinventing himself).  NJPW is becoming the place where wrestlers go to improve their game.  WWE is where wrestlers go to make as much money as they can while they're still healthy.  What's also telling is the numerous New Japan/ROH talents who have declined WWE contracts like Kenny Omega and the Young Bucks, and the recent WWE departures like Austin Aries and Neville who asked for their WWE release.  Wrestlers are increasingly discovering they can make a good living and actually be used based on their strengths outside of WWE, rather than floundering in a company that doesn't seem interested in creating legitimate box office draws.  It's a truly exciting development and I can't wait to see both the Jericho-Omega match, and Jericho's post-Dome New Japan run.  I assume it'll be a 3-6 month tenure and then he'll go back on tour with Fozzy.  We could easily see him return to WWE at some point as well, but the fact that he chose to go somewhere else after repeatedly vowing never to wrestle for any other company speaks volumes of how hot New Japan is right now.

Alright, moving on to the actual PPV.  Power Struggle was, in my estimation, New Japan's third-best show of 2017 (after WK11 and Dominion of course).  The undercard was a solid, consistently entertaining series of matches, and from the Jr. Tag Finals on we were treated to a variety of good-to-excellent bouts, concluding with, as I mentioned, three stupendous outings.

The Young Bucks returned to New Japan in the opening match to make fairly quick work of Titan and Dragon Lee.  It was a brief seven-minute encounter but a nicely executed, fun opener that re-established the Bucks as the division's team to beat.  No complaints there.

Next up were a pair of multi-man tags to keep the crowd feelin' good.  Suzuki-Gun took a quick dive against Juice Robinson's squad when Kushida tapped out Taka Michinoku.  Not much to that match but it was inoffensive and quick.  Then TenCozy and Togi Makabe had an enjoyable little match against the Bullet Club C-team when Kojima pinned Chase Owens.

From there the show really got going, beginning with the Junior Tag tournament finals pitting current champs Roppongi 3K against Ryusuke Taguchi and ACH.  Sho and Yoh continue to develop their cocky personas, showing no mercy for ACH's injured ribs, and more or less played the heels here.  ACH fought valiantly but ultimately succumbed to the hot new team, further cementing them as a division centerpiece.  This was a fine 16-minute match, after which the Bucks came out to challenge for the titles at the Dome (which promises to be a fantastic bout).

Next up was the one memorable multi-man tag, pitting Okada, Ishii, Goto, Yoshi-Hashi and Gedo against all five members of LIJ.  This played out like a fun RAW main event (remember those?), where we got a good little preview of Okada vs. Naito but plenty of interaction from the others.  Chaos surprisingly won the match after Okada leveled Bushi with the Rainmaker, after incapacitating Naito with a Tombstone.  Nothing amazing here but it had a big match feel and served as an appetizer for the Dome.  I'd love to have seen an elimination rules match between these teams.

The NEVER Openweight Championship was next, as Minoru Suzuki beat a rain check into Toru Yano, in a match that was certainly more entertaining than it had any right to be.  We got the usual SG interference, the usual Yano shenanigans, and even a few suspenseful nearfalls, but ultimately Suzuki killed Yano dead with a rope-assisted Gotch piledriver to retain.  Not sure what the plan is for the NEVER belt in January but I'm hoping for Suzuki vs. Ishii.

And here's where Power Struggle kicked into high gear.

Will Ospreay vs. Marty Scurll was the first in a fantastic trilogy of bouts.  The story here was that new Jr. Champ Ospreay has never beaten Scurll, whose simpler offensive style has repeatedly thrown the dazzlingly athletic Ospreay off his game.  These two had a fairly gritty but intricate 17-minute match that ended with Scurll scoring a shocking rollup pinfall to capture the title.  The aftermatch was just as memorable, with Kushida challenging Scurll for WrestleKingdom, Ospreay issuing his own challenge, and Hiromu Takahashi crashing the party wearing a helmet, boxing gloves, and a cup to ensure his streak of interrupted challenges would not continue.  In the end Scurll accepted all three challengers, making it a Fatal 4-way at the Dome.  I had initially hoped for an Ospreay-Kushida-Hiromu triple threat, but this should be pretty great too.  4-ways can be unwieldy affairs, but with the talent involved here I think we'll see something really special in January.

Next up was an unreasonably good semi-main event pitting Kenny Omega against heavyweight division newcomer Trent Baretta.  Omega took his US Title challenger less than seriously for most of the bout, dominating Baretta at every turn, until Baretta's resilience and determination began to shine through and he nearly upset Omega on numerous occasions.  After an apron piledriver, a table spot, a top-rope German suplex, and multiple finisher attempts, Omega held on for the win, making a star out of Baretta in the process.  This match was better than it even needed to be, nearly stealing the show.  The post-match angle will of course overshadow the match itself, but you need to watch this match too if you haven't.  The subversive Omega is now set to turn the wrestling world upside down in two months, in possibly the biggest match of his career (in terms of having the most mainstream eyes on it). 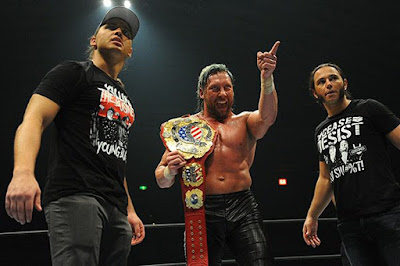 Finally we come to the Intercontinental Title match, as Hiroshi Tanahashi faced the man he'd taken under his wing, Kota Ibushi.  Tanahashi had challenged Ibushi as a way to light a fire under him, feeling Ibushi had not reached his full potential.  This story played out beautifully throughout the match, as Ibushi's temper flared up several times, at one point resulting in a brutal battle of palm strikes.  Ibushi would repeatedly dominate the action until being cut off by a Tanahashi dragon screw.  These two put on a 29-minute clinic that saw Ibushi break out all his spectacular signature offense, including the top-rope Golden Triangle moonsault, the Phoenix Splash, and the Last Ride powerbomb.  In the end though, Tana put him away with a pair of scintillating Hi-Fly Flows, embracing the tearful prodigy post-match.  Tana's celebration was then cut off by the returning Jay White, now known as "Switchblade," thus setting up his January 4th defense.  I've been a big fan of Jay White since early last year when he debuted as a young lion (His Bryan Danielson-esque mat grappling immediately caught my attention), and I'm thrilled to see him not only back in New Japan but being pushed in a very prominent position.  A win over Tanahashi at the Dome should be a career-making moment for the New Zealand native. 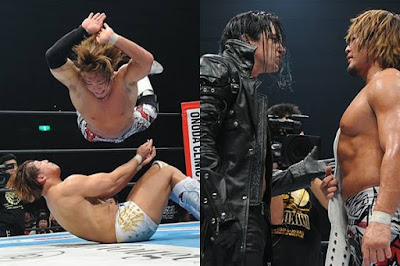 So Power Struggle had a triumvirate of excellent matches, plus a fun 10-man, a very good Junior Tag final, and a host of solid undercard bouts, not to mention some major news developments.  What more could anyone want out of a wrestling PPV?  I say again, this was my third-favorite New Japan show of the year.

And WrestleKingdom 12 is coming together fantastically, with the biggest-possible main event for the Japanese audience but also a monumental crossover match for western fans.

Kazuchika Okada vs. Tetsuya Naito for the IWGP Title
Kenny Omega vs. Chris Jericho for the IWGP US Title
Hiroshi Tanahashi vs. Jay White for the IWGP I-C Title
Marty Scurll vs. Will Ospreay vs. Kushida vs. Hiromu Takahashi for the Jr. Heavyweight Title
Roppongi 3K vs. The Young Bucks for the Jr. Tag Titles

Already this card is STACKED, and we still have the IWGP Tag Championship and the NEVER Openweight Title to figure out.  Once again New Japan is set to put on an absolutely breathtaking Dome show.  It's an exciting time to be a fan....

Thanks for reading!  Don't forget to join our Facebook group HERE for all Enuffa-related updates....