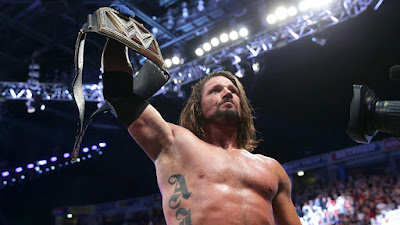 Last night on Smackdown, AJ Styles unseated WWE's worst Champion of all time (Yup, I'm goin' there), Jinder Mahal to not only capture the belt but take Jinder's spot in the Survivor Series main event against Brock Lesnar.  And thus we now potentially have a main event worth watching, provided Vince doesn't just book Lesnar to squash AJ.  What SHOULD happen at Survivor Series is Brock has a bitch of a time catching the lightning-quick Styles and is kept off balance for much of an 18-minute match, finally getting his XXXXL-gloved hands on AJ toward the end and lowering the boom.  I have zero problem with Brock beating AJ, but it's gotta look good and be a competitive match.  For the first time in a WWE ring we have two former IWGP Heavyweight Champions squaring off.  That in and of itself is quite something.  The match could be fantastic if they do it right.  Please do it right, Vince.  Throw us a frickin' bone here.....

There was another title change this week, as Cesaro & Sheamus regained the RAW tag belts from Seth Rollins and Dean Ambrose.  I'm not crazy about this change unless it's to create a Shield match (more on that in a sec), as we now have yet another heel champion vs. heel champion match.  For 24 hours every title in the company was held by a heel.  Normally I'm fine with that scenario, but not if you're doing champion vs. champion matches in two weeks.  I really would've liked to see Owens & Zayn beat The Usos for the Smackdown belts and face Ambrose & Rollins, but that one's not in the cards.

Instead what seems imminent to be added to the lineup is The Shield vs. The New Day.  At least that's what's being teased.  Should be a good match, but why not just add The Bar and The Usos (or better, KO & Sami) and make it another 5-on-5 elimination match?  There's no belts on the line anyway, so who cares?  I'd rather see a third Survivor Series match on the Survivor Series PPV.  Call me crazy, call me a pervert.  Anyway....

Next week's Smackdown will have two title matches that could further change the card.  This build has been the weirdest since the Russo era.  Baron Corbin is defending against Sin Cara - why are they pushing him again all of a sudden?? - but I won't be sad if Cara wins because a) it's makes a heel vs. face match at Survivor Series, and b) Miz vs. Sin Cara will be a helluva lot more fun than Miz vs. Corbin.  And Nattie is defending against Charlotte.  While I'd be sad to see Nattie's reign cut so short, Alexa vs. Charlotte is also a heel vs. face matchup and will probably get the crowd more engaged than Alexa vs. Nattie.  So both changes could be positives, and I assume Nattie would take Charlotte's place in the women's elimination match.

If the Shield-New Day match gets added, Survivor Series will have an 8-match lineup.  Please tell me the Enzo-Kalisto match gets bumped to the pre-show then?  No one gives a shit about that one, and even for a four-hour show, eight matches is a lot when two of them are 5-on-5.  I'm guessing Owens and Zayn get involved in the men's elimination match and screw over Shane's team.  I'm also guessing Jinder gets added as the fifth man for Smackdown (Ugh)?

Still so much up in the air for this show, considering it's in eleven days.  But at least we have a strong main event now.  More importantly, Jinder Mahal's Reign of Suck is finally over.  Let's keep it that way.