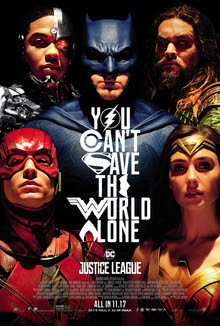 I finally watched Justice League yesterday. As someone who didn't hate but didn't love Batman V Superman, I was somewhat looking forward to this one after watching the excellent Wonder Woman. So let's dive into this and check out the good and the bad.

GOOD: Jason Momoa as Aquaman and Ezra Miller as the Flash. They both are given some time to develop a backstory and both are quite good in these roles. Momoa as a cocky Arthur Curry is perfect casting. He's funny and he's ready for combat. Plus he confuses my pants area...I'm surprised by that. And Miller plays the Flash as a socially awkward nerdy guy. It's not the characterization I woulda gone with but dammit, the kid nailed. He's funny throughout the whole thing and really kills this role. 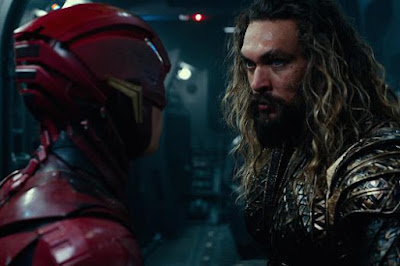 These two were awesome.

BAD: Cyborg. Not Ray Fisher playing Cyborg, he's fine. Cyborg the actual character. There is essentially no explanation for why he's this shape shifting Iron Man type dude. They tell us he was in an accident and boom he's the T-1000. It's way too fast an origin. In fact...

BAD:...Way too fast origins. They give Flash, Aqua and Cyborg like ten minutes each to tell their stories. It's simply not enough time. The reason the Marvel movies work so well is we see those characters through the growing pains and how they become heroes. In this, it's all way too quick. Here's a fast guy who even tells Batman "I've never been in a fight" aaaaaaand now he's fighting flying demons. Here's a robot guy that doesn't even know how his robot body works aaaaaaand now he's shape shifting to make a laser gun. Without the proper setup for these guys and their powers, there's no individual arc for us to cheer on. It's simply "here's superheroes, cheer along"

GOOD: SPOILER ALERT but not really. So Superman is back and they finally seem to understand how to do this character, at least a little bit better. I mean, it's strange for him to come back from the dead and lighten up, but whatevs, I'm glad Henry Cavill gets to play a real Superman.

GOOD: Speaking of good Superman, HOLY SHIT THEY PLAYED THE JOHN WILLIAMS THEME MUSIC. Sure, it makes no thematic sense and it's actually quite jarring to hear it, but fuck me if I wasn't excited. Visibly.

BAD: The bad guy.
A. who the fuck is Steppenwolf?
2. why the fuck does he look like a knockoff Loki?
D. he's no threat at all in this movie. NONE. 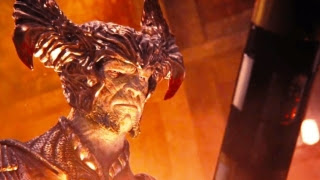 THE REST: Gal Godot continues to be awesome as Wonder Woman. Who knew the best DC Universe character wouldn't be Bats or Supes? She's great.

Batfleck is still good. I like Ben as Bats. Sue me.

There's way too much CGI in this movie. The final conflict is in a thunderdome of Steppenwolf's making and it's a smorgasbord of CGI bullshit. It's boring.

Overall, JL isn't a bad movie but it's not great. It's better than BvS but nowhere close to WW. It sets up some interesting things going forward. They shoulda spent more time explaining Cyborg and if they make his movie, it's gonna be like reverse engineering. He's already a hero now, so his journey is kinda anticlimactic. I def would love to see the Aquaman and Flash movies. But they FINALLY made these characters likable in this universe. And that's good thing moving forward.