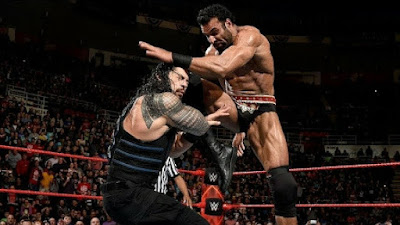 Alright, so to recap the events of the past two days: Roman Reigns and Samoa Joe had a main event match at Backlash.  A main event match that was so dull, so plodding, that many fans in attendance LEFT THE SHOW THEY'D PAID FOR, before the match was over.  The thinking is that Samoa Joe, despite being a heel, is such a well-respected in-ring worker that his usual well-rounded offense would be counterproductive in getting Roman Reigns over as a babyface, because the crowd would cheer Joe and boo Roman.  Yes, the same Roman Reigns that Vince McMahon has been unsuccessfully trying to get over as a babyface for FOUR YEARS now.  Vince's thinking was apparently that if Joe wrestled a boring, one-dimensional 70s heel style replete with uninteresting rest holds, that Reigns's eventual comeback would be met with enthusiastic cheers by the WWE faithful.  Now look, I get that you generally don't want your heel doing anything so flashy that the crowd likes him more than the babyface.  But in what alternate reality does Vince live where the heel putting on the most boring match possible will magically make everyone cheer the babyface, WHEN THEY HAVEN'T BEEN CHEERING HIM FOR FOUR YEARS?

So this plan obviously didn't work, as illustrated by the walkouts during the main event of a PPV.  You'd think this would give the man pause long enough for him to think, "Hmm, the crowd hated Roman's WrestleMania main event, and people actually walked out of his Backlash main event.  Maybe it's time to try something else."

Last night on RAW they started a feud between Roman Reigns.......and fucking Jinder Mahal.  Yes, the same Jinder Mahal who proved himself more or less cosmically inept in the ring during his 2017 main event push, and actually HURT ticket sales in the one country his push was designed to attract them.  Vince McMahon actually thinks the millions of fans who have booed Roman Reigns unmercifully the past four years will suddenly go "Oh, Roman's feuding with that hack now?  Yay, go Roman!!"

Let me ask you something: years ago when you were cheering like crazy for Hulk Hogan, Randy Savage, Steve Austin, Bret Hart, Shawn Michaels, whoever your hero was, did you cheer him simply because the guy he was fighting sucked out loud in the ring?  Was that the only reason?  Did Hulk Hogan become popular only because people didn't want to see King Kong Bundy on their TVs?  Was Steve Austin the most white-hot babyface of all time just due to Vince McMahon not being able to throw a decent punch?  If you answered yes, you should seek professional help.

A popular babyface isn't popular because his opponent has "go away" heat (Don't kid yourself, this is the only kind of heat Jinder draws - just look at the anemic box office while he was champ) - a popular babyface is popular because he connects with the audience and they are emotionally invested in seeing him beat the other guy.  If he hasn't been able to connect with the audience for literally years, what in God's goddamn name makes anyone with a lick of common sense think the way to turn that around is for him to feud with an anti-box office draw who can't wrestle very well?

"Yeah, this Ringmaster guy isn't getting over, let's have him fight Duke 'The Dumpster' Droese, that'll fix it."

Hasn't the practice in pro wrestling ALWAYS been to match up guys you want to be successful with good mechanics who will help make the matches entertaining?  Like, isn't that Wrestling 101?  You want Braun Strowman to get over?  Put him in there with Sami Zayn, because Zayn is a good worker and will make Braun look like a million bucks.  You don't put Braun in there with Titus O'Neil?  Why?  Because Titus is clumsy and not very technically gifted, and the match will suck.  I say again, in what universe does Roman Reigns having shitty matches against a boring opponent (or a strong opponent made to look boring) get Roman Reigns over?  Explain to me the logic.

It's gotten to the point where fans everywhere are going to have to walk out of every Roman match for Vince to get the point.  And I like Roman Reigns.  I really do.  But he's not over as a babyface.  Period.  Turn him fucking heel and focus on someone the fans actually relate to.