WWE Backlash 2018: Seriously, What Are You Doing?

Welp, leave it to WWE to take a surefire good PPV and make it not good.  I won't say Backlash was horrible like many reviews are, but it was sure as shit disappointing, mostly because of (big shock here) stupid booking decisions.  I felt like the Royal Rumble (the real one in January, not the superfluous one in Saudi Arabia), Elimination Chamber and FastLane were all well-booked shows that were elevated by adhering to logic and mostly giving the audience what they wanted.  Then with WrestleMania the decision-makers (Vince) went insane and threw together multiple nonsensical finishes which hurt match quality AND pissed people off.  And they haven't recovered from it since.  Vince ran out of his meds apparently, and is on a waiting list to get more.  WWE could fuck up a peanut butter sandwich..... 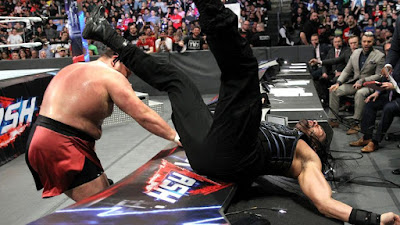 Backlash started out so promisingly, with an excellent Seth Rollins-Miz bout for the Intercontinental Title.  Harkening back to the days when that belt really carried importance (with Seth holding it and delivering matches like this it certainly could again), this was dramatic, athletic, and the crowd bought into every minute of it.  How Seth isn't Vince's pick for The Guy instead of Roman is beyond me.  Seth is better than Roman in literally every respect, and while not as bulky, has a fantastic look.  More importantly, the fans actually LIKE Seth.  Just look at the reactions for this match vs. the main event.  This match got as much time as just about anything on the show and built to a fever pitch after Seth missed a Revolution Knee on the apron, drilling his own knee into the ring post.  Miz then locked in the Figure Four and we were treated to one of the most intense Figure Four spots in recent memory, as Seth fought the pain for a long time before eventually reversing the move.  This was so well done I thought we actually might see Miz tap out from the reversed F4, something I don't think we've ever seen.  They ended up in the ropes however, and the match continued until Seth hobbled around just long enough to hit the Curb Stomp for the win.  If Seth gets to keep this title long-term his reign could be in the same conversation as Bret Hart's or Randy Savage's.  This is how you book an Intercontinental Champion. 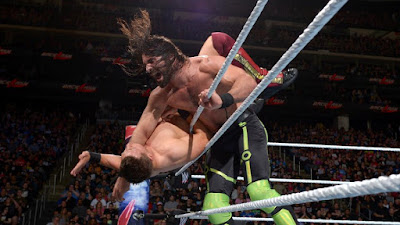 The show would never reach this level of quality again.

Next up was the Nia Jax-Alexa Bliss rematch, which was on par with their 'Mania bout.  So quite solid.  Alexa's stellar heel character work adds storytelling heft to her matches, even if mechanically they aren't perfect.  They may have booked Jax to struggle a bit too much considering the size difference, but this match was engaging and had some cool spots, like Bliss DDTing Jax on the ring steps.  Jax eventually retained with a Samoan Drop and cut a fairly awkard promo about bullying.  Don't get me wrong, I agree with the sentiment, but Jax's mic delivery needs a lot of work and of course the promo was written very hamfistedly.  Overall, another good showing from Bliss and Jax.

Third was Jeff Hardy vs. Randy Orton, in a perfectly serviceable but not terribly memorable US Title match.  Like, off the top of my head I remember the finish and that's about it.  I was glad to see Hardy retain since he can have some decent title matches with the Smackdown challengers.  Orton has long since ceased to interest me and I'm not even sure what you can do with him at this point.  His character and his in-ring style are horribly ill-suited to being a babyface and he comes across as not at all motivated.  Anyway, this was fine but nothing more.

Daniel Bryan's first PPV singles match in three years was....brief.  There's only so much he can do with a guy as green as Big Cass, and I was glad Bryan wasn't booked to struggle much in beating him.  Also Corey Graves was a total Bryan mark here, which was amusing.  Cass, like his girlfriend Carmella, is very good as a character, but needs a lot of work in-ring.  Bryan withstood Cass's short-lived onslaught and tapped him out with a Yes Lock (after needing to remind Cass to try to block it first).  Then of course Cass attacked Bryan after the match - we aren't getting this again, are we?  Bryan needs to be in the Title picture, pronto. 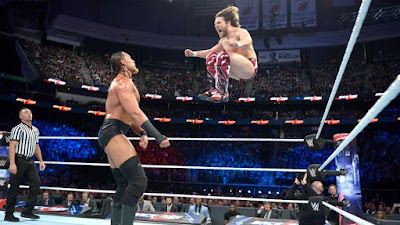 Carmella-Charlotte was next, and while nowhere near the level of match Charlotte is capable of, this kept me entertained at least.  As I said, Carmella is a great douchey heel character but has zero business being the champion; this title run needs to be short, especially if Charlotte-Ronda is the plan for WM35.  Charlotte tweaked her knee after a moonsault attempt, and Carmella chopblocked her and rolled her up for the quick pin.  At this point Carmella should be someone's mouthpiece, not the Women's Champion.  Why not put her back with Cass, their heat-drawing abilities could help elevate each other.

Here's the part of the show that pissed me off and more or less ruined it.  First off, how does the WWE Title match NOT get the main event slot on a show with no Universal Title match?  Well that question would be answered by the stupidest finish they've booked since.....well, Roman spearing Brock through the cage and somehow losing.  I'd like to state that AJ and Nakamura were well on their way to finally having their classic match in WWE.  The action was crisp, Nak looked more motivated than he has since NXT Dallas, and the No DQ stipulation was only sparingly used (I've actually read complaints that there weren't enough weapons used, but is a car wreck match really what you want to see out of AJ vs. Nak?).  Plus they did the double groin kick spot, which I've thought for years would be a hilarious moment in a match.  And then that was the goddamn finish.  HUH???  So that's two WWE Title matches in a row with non-finishes, and a No Disqualification match ended in both guys getting counted down.  The fuck sense does that make?  Much like with last year's AJ-Owens feud, it feels like this is being sabotaged.  Can we just get a 25-minute AJ-Nakamura match with a fucking beginning, middle and end?  Is that really too much to ask?  So now what?  A fourth match at Money in the Bank, with some other stipulation?  Last Man Standing or some shit?  How does WWE take something that should automatically be quality and seemingly go out of its way to ensure that it isn't? 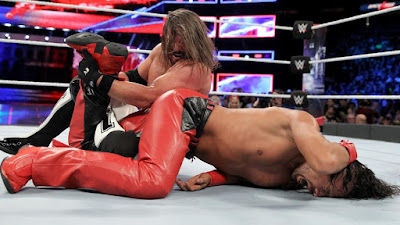 After that I lost interest in this show, so Strowman/Lashley vs. Owens/Zayn struck me as totally pointless except for the splintering of the Owens-Zayn friendship.  What's intriguing about this is that it seems like Owens will be the babyface in their impending feud.  So that's something different.  But this match sucked.  Lashley is as wooden as ever, and is his finisher seriously a delayed vertical suplex?  One he's not even good at?  In his two PPV matches since coming back he's fucked up that move twice - he almost killed Cass at GRR and here he could barely keep Owens vertical and had to cut the delay short when he started to lose control of the move.  Why did you bring this guy back??

And finally there was the main event - Roman Reigns vs. Samoa Joe.  This match was.....very boring for the first half.  Samoa Joe is a well-rounded wrestler with a diverse moveset, and apparently WWE doesn't want him using any of it.  Joe kept Roman in rest hold after rest hold, to the point that the crowd turned on the match hardcore and some people actually walked out.  Yeah, tell me more about how Roman is a "megastar" because he gets a reaction?  This match started exactly like Joe vs. Brock last year, where Joe attacked Roman before the bell and hit a Uranage through the announce table.  So Roman had to fight from behind the whole match, which made it very dull until his comeback.  The last five minutes or so worked as a WWE-style main event, and Joe came very close to winning, thus being somewhat protected; they teased Reigns passing out in the Coquina Clutch.  Reigns finally hit the second spear of the match (Joe was too close to the ropes the first time) for the win.  But Jeezus man, Reigns cannot be made to sell for most of his matches and still get over.  When your ploy to make Roman sympathetic results in the crowd WALKING OUT, you're doing it wrong.  Roman is not The Guy.  No matter how hard you try to make him The Guy, it's not gonna happen until he's spent a solid year as a heel first.  Concentrate on Seth and Braun as your top RAW babyfaces for now. 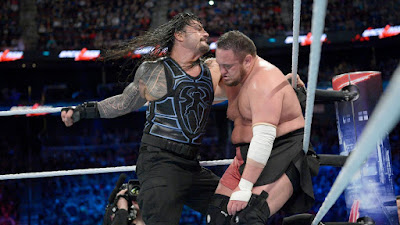 So yeah, this show wasn't garbage like so many are saying, but it was a major letdown and largely counterproductive.  One fewer stupid booking decision and AJ-Nak would've been a classic, thus the show would've been well-received overall.  I'm very glad there are no more WWE PPVs till mid-June.  They need a break, big-time.

Best Match: Seth Rollins vs. The Miz
Worst Match: Strowman & Lashley vs. Owens & Zayn
What I'd Change: Fuckin' put the WWE Title match last and give it an actual ending.  Shit or get off the pot with this feud.
Most Disappointing Match: AJ-Nak for the finish, Roman-Joe for the dullness.
Most Pleasant Surprise: That the opener got so much time
Overall Rating: 5/10

Posted by Justin Enuffa Ballard at 11:26 AM