It's mid-July and that means it's time for the most exciting four weeks on anyone's wrestling calendar, when twenty of New Japan's top heavyweights compete in a round-robin tournament for a slot in the WrestleKingdom main event.  That's right, the G1 Climax is upon us!

This year's lineup is stacked as all hell, and similar to last year's (I'm not complaining by the way, the 2017 edition was pretty unanimously considered the greatest wrestling tournament of all time), but with championships having changed hands and certain participants looking to climb back up the mountain the stories should play out a little differently.

For those of you new to the G1, the format is two blocks of ten, each of whom wrestles everyone else in his block once over the four weeks.  A win gets you 2 points, a draw gets you 1, a loss gets you 0.  The two block leaders at the end face each other in the Finals, and the winner gets the #1 Contender's briefcase to challenge for the IWGP Title at WrestleKingdom, but with a caveat.  Whoever had defeated the eventual winner during the course of the tournament gets to challenge him for said briefcase, which plays out over the fall PPV season.  Thus far the briefcase has never changed hands, but there's a first time for everything.  Also of note, since the implementation of the G1 briefcase in 2012, no G1 winners have gone on to dethrone the champion at the Tokyo Dome.  It is a great honor and accomplishment to win the G1 Climax but by no means is it a guarantee of becoming the IWGP Champion.  The G1 winners in the briefcase era were Kazuchika Okada in 2012, Tetsuya Naito in 2013, Kazuchika Okada again in 2014, Hiroshi Tanahashi in 2015, Kenny Omega in 2016, and Tetsuya Naito again in 2017.

But anyway, let's get to the analysis.  I'll talk briefly about the 20 participants and then offer predictions and most anticipated matchups in each block. 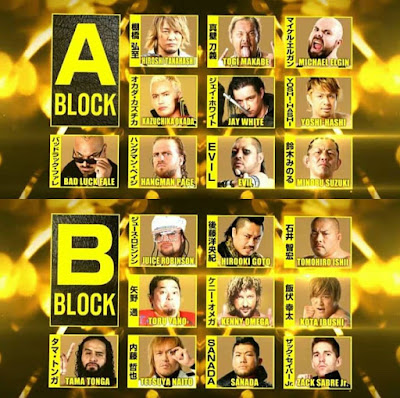 The former IWGP Champ enters his first G1 in four years without the cherished gold.  This radically changes the dynamic of his performances here, as he'll no longer be playing defense.  Instead Okada will need to scratch and claw his way to the top of the standings if he wants to main event WrestleKingdom for the fifth straight year.  We should feel a greater sense of urgency in his matches this time.  Okada is, I would think, a lock for the Finals and a heavy favorite to win it all.

The previous company Ace still has some gas left in the tank.  Can he climb back up the mountain and get one more run with the belt?  Tanahashi's big matches the past year or two have carried a greater sense of desperation, as he struggles to stay at the level of his prime years.  Tana will last deep into this tournament but likely fall short on the last A block night, falling to Okada again.  Or will he?

Fresh off losing the US Title in what has to be considered his best match to date, Jay White has gone full-on asshole heel and I love it.  Being a former champion, he'll obviously have a bigger chip on his shoulder which should garner electric heat and make his matches emotionally engaging.  Looking forward to seeing him grow as a performer over these four weeks.

Suzuki should have a very good showing as always, likely attempting to play spoiler to the top seeds like Okada and Tanahashi.  We're still awaiting the big Suzuki-Ishii explosion but as they're in opposite blocks that won't happen here.  Suzuki will be near the top but won't make the finals.

Page has a lot to prove here and this'll be a great environment to do it.  He gets to fight some of the best talents in the land and show everyone that he belongs in NJPW.  I initially dismissed Page when he joined the Bullet Club but he's been growing on me and I think he'll rise to the challenge like Michael Elgin did in 2015.

Another potential spoiler, Evil had a strong showing in last year's tournament, handing Okada his first defeat on his way to a PPV main event that fall.  I don't think he'll beat Okada again this year but he'll finish in the upper half of the block.

Fale is one of three G1 mainstays I wish they'd replaced (along with Yoshi and Yano); he's got no chance of winning and his matches aren't good enough or different enough from each other to warrant inclusion in yet another G1.  Replacing Fale with someone new would've been a good way to shake up the blocks a bit.

I dunno what regimen Elgin's been on but he looks better than he ever has.  Coming off a very brief NEVER Title run (which ended with a thrilling battle against Goto), Elgin hopes to rack up some wins and get back into title contention.  He's become one of the company's more reliable workers.

Another perennial inclusion I wouldn't miss if he were swapped out, Yoshi generally delivers good G1 matches but there's little suspense involved since we know he isn't winning many of them.  I'd have liked to see the Young Bucks included in this year's G1, as they're heavyweights now.

Makabe is the tournament's elder statesman this year (younger than Suzuki but also much farther removed from the title picture), likely to finish near the bottom but also likely to put in some memorable work.  His matches with Okada and Elgin should be fun.

This'll be interesting - the last two G1 winners kick things off for this block in a rubber match.  I have to think Omega-Naito III will be less crazy than the first two, since it's at the beginning of the tournament and not the end.  Now that he's the champion Omega both needs to prove himself a worthy successor to Okada but also has to stay healthy so he can defend the title.  Should be an interesting contradiction to see play out.  Omega pretty much has to be in the final four but likely won't make the Finals.

Last year's winner is desperately searching for his third G1 trophy since coming up short for the belt at WrestleKingdom.  Naito just dropped the Intercontinental Title to Chris Jericho as well, so look for Naito to be more unhinged and prickish than usual.  He's obviously one of the tourney favorites once again, likely to be the block leader or runner-up.

Here's my dark horse pick.  Ibushi's last two G1 runs were phenomenal, as he routinely delivered some of the best matches of both tournaments.  Can't wait to see how he does here, and his Night 18 showdown with Kenny Omega has to be high on most people's lists for their most anticipated bout.  I could potentially see Ibushi winning the whole thing on his way to a rematch with Kenny at the Dome.  It's probably a longshot, but it would certainly be a fascinating story.  That said, Ibushi still has to be one of the block leaders at the end and likely a routine show stealer.

Sabre went from a promising newcomer to a legitimately dangerous title challenger in the span of six months, so I expect him to have a very strong G1 showing and win some high-profile bouts.  I don't think he'll be in the mix for the finals but he'll get key wins to set up secondary title matches (with Goto perhaps).  Sabre is a future top guy.

Poor Ishii.  Since leaving the NEVER Openweight picture the G1 is about the only time of year where he consistently gets to shine.  The guy delivers killer matches every July and August and often gets relegated to undercard tags the rest of the year.  He needs to get some big wins here to set up important stuff over the fall.  His biggest match in this tourney will probably be against Sabre since he's feuding with Suzuki-Gun.  But in a block this strong he'll rack up some ****+ matches.

Another future main eventer, Sanada has had a pretty big year, headlining The New Beginning against Okada and winning the IWGP Tag belts.  This block will be a great place to continue to grow against great opponents.  Look for him to score an upset win or two over the favorites.

Goto lost and regained the NEVER belt in the span of a week.  His involvement in this tournament is likely to set up a challenger or two over the fall.  Zack Sabre would be a great choice I think.  Goto will have a decent showing but he's also in a stacked block.

A week ago I wasn't at all excited about Tonga's participation here.  That changed at the G1 Special when he formed his new Bullet Club offshoot, The Firing Squad, attacking both Kenny and Cody.  Tonga is one of those guys who always carried himself well but couldn't quite find his purpose.  I think that may have changed, and his matches here will undoubtedly feature some heavy story elements.

Like Elgin, Juice is another guy I wasn't sure about when he jumped to New Japan, but he's become an excellent worker and storyteller, and now he's also a champion.  Coming off a fantastic, emotional title win at the G1 Special, Juice should now have the confidence to really deliver some stellar work.  Juice is always fun to watch, and I love seeing guys WWE didn't know what to do with, make it big elsewhere.

I generally skip all of Yano's G1 bouts.  8-10 minutes of goofy comedy, an annoyed opponent, and either a cheap win or an ass-kicking for Yano.  Rinse, repeat.

I think Okada beats Tanahashi to clinch a Finals spot, and Ibushi upsets Omega, planting the seeds for a later Title match and an eventual split.  Okada vs. Ibushi would be an incredible Final, and I think Okada probably gets the duke to set up Okada-Omega V at the Dome.  And I will not be complaining in the slightest.

Okada vs. Tanahashi (Yeah I've seen it a million times but it's always awesome)

Okada vs. White (If anyone can get a great match out of White, it's Okada)

Okada vs. Suzuki (Curious how they make this match different than their others)

Omega vs. Naito (Again, their tournament-ending matches in 2016 and 2017 were insane, this one will have to be great but reserved)

Omega vs. Ishii (Always a treat when these two fight)

That's your G1 preview folks.  Can't wait to sit back and enjoy four weeks of fireworks.  Thanks for reading - stay tuned after the tournament for the recap!

Posted by Justin Enuffa Ballard at 10:28 AM