New Japan delivers again.  The G1 Special at the Cow Palace was yet another pretty stellar effort from the world's best wrestling promotion, featuring three excellent marquee matches and a host of fun undercard bouts, plus some newsworthy items. 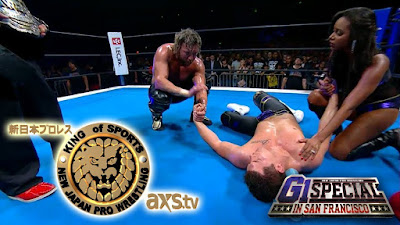 The first three tag team matches were just a fun way to warm up the crowd, starting with a 10-man tag between the lower-tier Bullet Club members and the supporting members of CHAOS (RPG3K, Gedo and Yoshi-Hashi).  The SanFran audience popped big for King Haku, who teamed with two of his sons (Tama Tonga and Tanga Loa), plus Yujiro Takahashi and Chase Owens.  The match was a briskly paced nine minutes and ended with Tonga scoring the pin on Gedo.  Not much more than a showcase, but it didn't overstay its welcome and Tama Tonga in particular looked like a star here.  More on that later.  **

Next up was the best of the three undercard tag matches, as Minoru Suzuki and Zack Sabre resumed their feud with Tomohiro Ishii and Toru Yano.  As expected this match shined when Suzuki and Ishii were pounding the snot out of each other.  Their inevitable singles match will no doubt be a brutal spectacle.  The finish came out of nowhere as Yano tried several times to hit a low blow on Sabre only for Sabre to block and counter.  But Ishii leveled him with a clothesline, allowing Yano to cradle him for the pin.  Very entertaining stuff.  **3/4

The third showcase match pitted Tanahashi and Kushida against Hangman Page and Marty Scurll, and accomplished a lot in elevating Page.  Very early in the match Page hit a death-defying shooting star press off the apron to the floor, landing on his feet(!) and knocking Kushida down.  From there the pace was furious as the heavyweights and the juniors paired off, but in the end Page finished Kushida with his Rite of Passage finisher (reverse Tombstone piledriver).  Page is rapidly proving himself a worthy New Japan star and I'm interested to see how he does in the G1.  **1/2

The first important bout was next as Hirooki Goto defended the NEVER Title against Jeff Cobb.  This was a rugged display of athletic power wrestling, full of suplexes and high-impact moves.  This was my first time seeing Cobb and thus far I'm duly impressed.  From what I understand this wasn't even one of his best efforts (at 12 minutes it felt a little short), but I'm hoping New Japan will bring him on board officially.  Goto retained after the GTR.  Solid midcard match.  ***

The Young Bucks and Evil & Sanada faced off once again for the tag belts, in a very different match from their previous one.  Where the Dominion bout was heavily story-based, this was much more like your typical Bucks match, with nonstop action and wildly innovative moves.  On balance I think I preferred the first match but this was also quite good, with nearfalls galore.  After 16 minutes the Bucks retained with the Meltzer Driver.  ***3/4

The final showcase match featured Okada (sans Rainmaker robe and in a particularly jovial mood) and Will Ospreay against Naito and Bushi.  This was another fast-paced affair, with Okada and Naito showing off their usual stuff and Bushi and Ospreay giving a quick junior-style clinic.  After 12 minutes of traded moves, Ospreay finished Bushi with the Stormbreaker.  Solid match as expected.  **3/4

This special will be remembered for the last three bouts, starting with a wildly insane Jr. Heavyweight Title match.  Hiromu Takahashi and Dragon Lee pushed the envelope for dangerous cruiser-style wrestling with this 16-minute sprint, featuring an exhausting-looking string of traded German suplexes and a horribly terrifying spot where Lee countered a triangle choke with a botched Dragon Driver that dumped Takahashi directly on his head.  Takahashi was reportedly sent to the hospital after the match and I have no idea how he managed to finish it.  The Time Bomb countered a power bomb into a Canadian Destroyer, followed by his time bomb finisher for the win.  I just hope Takahashi's injury wasn't too serious - that was intensely frightening.  ****


What stole the show for me was the US Title match, as Jay White, playing the role of asshole heel to the very hilt, defended against the mega-over babyface Juice Robinson.  The crowd was pretty nuclear for this entire match, as White dominated Juice from the opening bell, tossing him through ringside barricades and going after his injured left hand (Juice was sporting a cast and was not allowed to use it as a weapon, lest he risk disqualification).  At one point White suplexed Juice into one of the barricades which knocked Jim Ross out of his seat.  Josh Barnett then got into the ring and got in White's face.  White, ever the chickenshit heel, shrunk away from the confrontation while Red Shoes coaxed Barnett back to his post.  Juice then mounted a comeback that included Pulp Friction, but White shockingly kicked out, crushed Juice with chickenwing suplexes, and went for his Blade Runner finisher.  But Juice countered with an airtight cradle for the surprise win, and the Cow Palace came unglued.  I've been saying since he came back that Jay White is missing a career-defining match and needed a little something extra to make me care about him, and this match unexpectedly rectified both of those shortcomings.  White has found his character in the sadistic, supercilious bully, and this match was chock full of compelling story elements, mixed with outlandish violence.  I am now invested in Jay White as a persona, while Juice Robinson finally has a match/moment on which he can hang his hat.  This was excellent.  ****1/2


The main event served as the closing chapter of the Bullet Club civil war (or so we thought), as competing alpha males Kenny Omega and Cody Rhodes put together a rowdy IWGP Title match featuring tables, ladders, and yes, chairs.  The bout started off slow but escalated quickly, as the two were seemingly trying to one-up the US Title match.  Omega double-stomped Cody through a table, Cody slammed Omega on a ladder, Omega attempted to suplex Cody off the ladder through a table on the floor, only to be suplexed to the mat himself, Omega powerbombed Cody from the ring to the outside, and the table didn't break (this looked brutal).  All these spots and their respective signature moves were spread out over 34 minutes, culminating in a One-Winged Angle and successful title defense for Kenny.  I liked the US Title match slightly better, but this was a pretty great Americanized version of a NJPW main event.  Post-match Kenny helped Cody to his feet, assuming the mantle of compassionate leader and putting their feud to rest.  But then Tama Tonga and his Tongan contingent attacked Omega, announcing their new stable, The Firing Squad.  Cody attempted to rescue Omega but was also laid out.  Looks like Tama Tonga is finally getting a real push, and this should provide some interesting G1 stories.  ****1/4


Overall the G1 Special was an easy thumbs-up show, featuring three ****+ matches and plenty of memorable moments.  The stage is set for a spectacular G1 tournament with some new elements to set it apart from last year's.

Best Match: Jay White vs. Juice Robinson
Worst Match: The 10-man opener, which was fine
What I'd Change: The main event could've maybe been a little shorter, and I certainly wouldn't have had Dragon Lee almost murder Takahashi.  Jeezus.
Most Disappointing Match: Nothing really
Most Pleasant Surprise: The US Title match
Overall Rating: 8.5/10