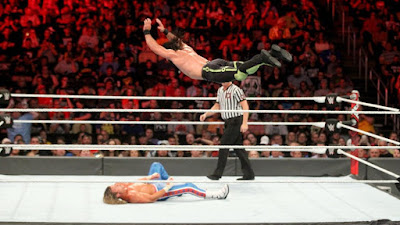 Move over Backlash, there's a new sucky PPV sheriff in town.  Extreme Rules felt like WWE was actively trying to put on a bad show, between the filler matches, the multiple instances of counterproductive booking, and the noteworthy moments WWE expects everyone to remember in place of good wrestling.  This felt like a Bischoff-era WCW PPV, except without a show stealing Cruiserweight Title match.  I'm hard-pressed to pick a match of the night; only two bouts are in contention but neither of them was even on par with the opening G1 match on night 3 (Michael Elgin vs. Hangman Page).  WWE's product is in absolute shambles right now and it requires on my part a Herculean effort to even get annoyed with it.  That's how little I care.

The show opened with a pair of utterly forgettable matches, one of which featured a title change.  The B-Team defeated Matt Hardy and Bray Wyatt for the RAW tag belts in a nothing, free TV-caliber match, and then Finn Balor "upset" Baron Corbin with a small package in another free TV-caliber match.  It's adorable they're still trying to present Corbin as any kind of threat, but no, I'm not buying it.  Balor's position in this company is so far beneath where he should be, but they have so many more issues beyond that I can't even focus on him.  *1/2 for the B-Team match, *3/4 for the Balor one.

Case in point, the systematic sabotage of Asuka in service of the least deserving women's champion since the Kelly Kelly era, Carmella.  I just want to sit down with Vince and ask him, "Why do you hate Asuka so much?"  I also want to sit down with Triple H and ask, "Why are you letting Vince destroy stars you've so carefully built?"  Going into WrestleMania 34 Asuka was something special.  An undefeated, legit badass with gargantuan charisma.  Three months later Asuka is just another one of the girls, just another dimwitted babyface who gets distracted by shiny objects at the expense of her title aspirations.  That a nothing in-ring talent like Carmella even beat Asuka to the championship, let alone got to pin her twice on PPV is a microcosm of how ass-backward Vince's booking philosophy is these days.  After five minutes of forgettable action, James Ellsworth predictably escaped his shark cage but got stuck hanging upside down, at which point Asuka forgot all about winning the title and instead beat up Ellsworth.  And then Carmella rammed her into the shark cage and pinned her.  Asuka could not have been made to look more ineffectual if WWE were deliberately trying (and I'm convinced they were).  DUD 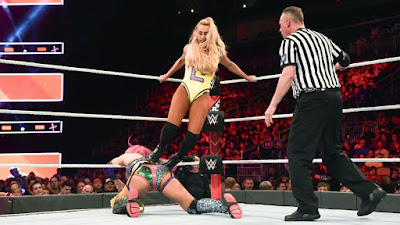 For a fleeting moment it looked like Shinsuke Nakamura was finally gaining traction, as he made delightfully short work of Jeff Hardy following a pre-match nut shot to win the US Title.  Cool, I thought.  They may not have delivered one of the few matches I was interested in, but Nakamura got a great character-building moment and a championship.  And then Randy Orton made his surprise return, apparently to issue a challenge to Nak.  Cool, I thought again.  A feud with Orton would elevate Nakamura's profile nicely.  But wait, Orton was just there to kick Jeff Hardy while he was down.  So Nak's title win was totally overshadowed.  Super.  NR 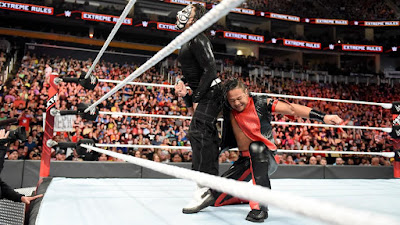 I mentioned earlier a big moment being substituted for a good match, and Kevin Owens vs. Braun Strowman was a great example of that.  These two had a very nondescript cage match that ended with Strowman throwing Owens off the top of the cage through the announce table.  Twenty years ago when Mick Foley took the same bump in the same city it was earth-shattering.  Owens taking this bump felt like a cheap, unnecessary attempt to get people buzzing about a match they'd have otherwise forgotten ten minutes later.  Further, it reinforced that wins and losses are meaningless in today's WWE; Strowman sacrificed a win just to injure the guy.  Remind me again, who's the babyface in this feud?  **

Next up was Daniel Bryan's one-man show against the Bludgeon Brothers.  Harper and Rowan had attacked Team Hell No backstage, injuring Kane's leg and forcing this to essentially be a handicap match.  Bryan was booked surprisingly strong here, handling both guys with relative ease for most of the match.  Then Kane heroically entered the match, hobbling down the aisle with a cast on his leg.  And then after a few minutes of clumsy action Bryan got pinned.  Sooo, what was the point of this reunion?  Like, I didn't really want Team Hell No to win the belts, but was this all just for a one-off match in which Bryan and not the irrelevant Kane took the fall?  What possible reason does Bryan have to stay with this company at this point, besides money?  His return to the ring should've been a huge deal.  Instead he's done basically nothing of note in the last three months (aside from the Rumble longevity record).  ** 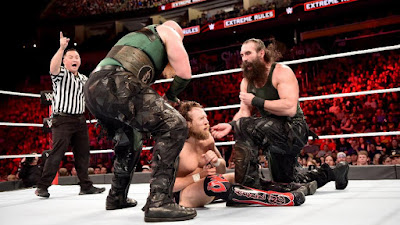 I was pleased to see Roman Reigns vs. Bobby Lashley not take the main event slot.  This was about as good as could be expected.  The first half was exceedingly boring, the second half was pretty entertaining.  They did some fun spots on the outside, such as Lashley suplexing Reigns onto the table, before Lashley ultimately beat Reigns to a spear for the upset win.  At the time of the match I was actually intrigued; maybe the SummerSlam main event wouldn't be the snoozefest Vince has been planning for months.  But no, on RAW the next night it was painfully clear.  Roman vs. Lashley II will end with Roman getting the #1 contender's spot and facing Lesnar for what feels like the 19th time.  I implore everyone in the Barclays Center on August 19th to walk out during this match.  The babyface no one likes vs. the heel champion who's leaving the next day.  Boy am I on the edge of my seat.....  *** for Reigns-Lashley by the way.

Another instant non-classic was next as Alexa Bliss faced Nia Jax again, this time with Extreme Rules.  It's hilarious to me that the one eponymous gimmick match on this PPV went 7:30 and was third from the end.  Extreme Rules needs to go away as a concept PPV.  Alexa DDTd Nia on a chair to retain after Ronda Rousey chased her around the ring.  This was actually the worst of the Bliss-Jax series.  *1/2

AJ Styles, the WWE Champion (and the one top star WWE books well), STILL didn't get to headline this PPV despite once again being the only top-tier champ on the show.  His match with Rusev was one of the two contenders for Match of the Night, but lacked urgency since no one bought Rusev as having much of a chance.  Funny how booking a guy into oblivion for years and back-dooring him into a title shot tends not to get people invested.  This match was fine for a Smackdown main event, but pretty pedestrian for a PPV title match.  AJ did what he could.  ***1/4 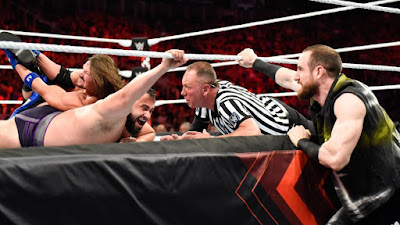 For the first time in 16 years the Intercontinental Title got to headline a PPV, as Dolph Ziggler and Seth Rollins had a pretty good Iron Man match.  They tried to do something different here, hammering home the idea of racking up as many falls as possible.  Seth took an early 2-0 lead before Drew McIntyre attacked him, drawing a DQ for Dolph and leaving Seth incapacitated.  Dolph was quickly able to even the score at 3, and not long after took a 4-3 lead.  Seth then got to sell the urgency of needing to pull ahead again before the clock ran out, making solid use of the gimmick.  I actually thought the announcers were pretty good calling this one too, with Jonathan Coachman sounding like a legit sports broadcaster at times.  But here's where the match fell apart for me - about three minutes before the time ran out with the score tied at 4, Dolph tried to make a run for it, and Seth chased him down and threw him back in the ring.  Ummm, why?  Dolph gets himself counted out, Seth takes the lead again and probably wins the belt.  Did the "producers" forget how Iron Man matches work?  Triple H won the WWF Title from the Rock in 2000, thanks to a last-second disqualification.  The announcers even mentioned early on that DQs and countouts count toward your final score.  So why the fuck would Seth bother chasing Dolph if he's trying to leave?  Let him get counted out and you win the strap.  Anyway, time ran out just as Seth was about to pin him following a Curb Stomp, and then Kurt Angle announced a sudden death overtime, at which point Drew came back and distracted Seth long enough for Dolph to hit the Zig Zag for the win.  And then Kurt did nothing.  Really?  Consistency matters, jackasses.  ***1/4

So yeah, Extreme Rules pretty much sucked.  WWE's product is as uninspired as it's been in years, in spite of a thriving roster.  Run by literally any other promoter this talent pool would be killing it right now.  But they're stuck sleepwalking through badly written storylines and poorly assembled matches.  Vince's retirement cannot get here soon enough.

Best Match: I guess the Iron Man match?
Worst Match: Carmella vs. Asuka.  Seriously, fuck this company.
What I'd Change: Almost the entire lineup.  Oh, and Asuka would've squashed Carmella for the fucking belt.
Most Disappointing Match: Hardy vs. Nakamura, since it wasn't a match and was booked into an afterthought when Randy showed up.
Most Pleasant Surprise: Reigns vs. Lashley
Overall Rating: 4/10