Welcome to another installment of Wrestling Do-Overs, here at Enuffa.com, where I dig out an old PPV that kinda sucked (or in the case of today's subject, was a vile, steaming shit burger), and reshape it to make it better. 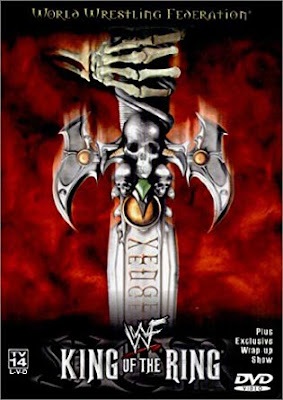 Today I'll be revisiting the 2000 King of the Ring, which took place in my hometown of Boston, MA, and served as the most disappointing PPV of an otherwise pretty fantastic calendar year for the WWF.  2000 was of course the year when almost every B-PPV was awesome (Armageddon being the outlier), while almost every Big Five show was overloaded and mediocre-at-best (the wonderful 2000 Rumble was the one exception).  But the PPV that really stunk up the joint like a rotting carcass in the fireplace was King of the Ring.  At a time when the company had maybe the best roster they'd ever assembled up to that point, they bragged that the 2000 tournament would boast the largest field ever at 32 participants, with the final eight advancing to the PPV itself.  And aside from two very puzzling inclusions (What in the green fuck were Crash Holly and Bull Buchanan doing in the quarterfinals?), this Elite 8 was very strong indeed.  So how'd they screw it up so bad?  Hold that thought for a second while I go over the non-tourney bouts.

One of the drawbacks of including an eight-man tournament on one show is of course the time constraints.  The tournament ate up seven slots, and the WWF for some reason felt the need to cram four additional matchups onto this card (Keep in mind that back then PPVs were limited to three hours; no WWE Network luxuries in the double-aughts).  They included a four-way Tag Team Title match (which ended up being the one really solid thing on the show), a convoluted tables/dumpster tag team match, an Evening Gown Hardcore Title match between two quinquagenarians, and a six-man tag match for the WWF Title, wherein whomever scored the final pin would be the champion.  Said main event included two non-wrestlers, Vince and Shane McMahon, and ended with The Rock pinning Vince to win Triple H's WWF Title.  A lamer way to win the company's top championship I can't imagine.


So back to the tournament - as planned, the bracket consisted of seven matches, the longest of which went 9:50.  And that match took place in the first round.  Yup, not one tournament match reached the ten-minute mark.  Contrast that with the 1993 King of the Ring, which featured two full-length Bret Hart matches (19 minutes and 18 minutes, respectively), one of which was the PPV's main event.  Which tournament do you suppose came off as a bigger deal?  Ya goddamn right.

The opening round in 2000 included Chris Benoit inexplicably getting himself disqualified against Rikishi (Rikishi was locked in the Crossface but reached the ropes, and Chris got so mad he attacked 'Kish with a chair - makes sense), Val Venis pinning Eddie Guerrero after a distraction, Bull Buchanan dominating Crash Holly only to lose via rollup, and Chris Jericho being booked like an idiot in a loss to Kurt Angle.  So three of the tournament's four best talents were gone after the first round.  Then the semifinals were over in a combined 7 minutes, 13 seconds, with Rikishi and Angle advancing.  The finals lasted a shade under six minutes after a Kurt Angle top-rope belly-to-belly suplex, the one memorable spot in the entire bracket.  Jeezus, this tournament was a horribly embarrassing disappointment.  Kurt Angle's career was of course helped a great deal with this win (unlike the previous two KOTR winners), but for a bracket that included Angle, Benoit, Jericho and Eddie, this sucked out loud.  With the volume turned up to 11.


Let's take a look at the full results of this show and then I'll come up with my (vastly superior) alternate version...


What a terrible fucking show.  And the eleven matches totaled roughly 83 minutes, less than half the allotted three hours.  That's an average of under eight minutes per match.  Just inexcusable.  Here's how you make this stinker work (As usual I'll keep the outcomes the same as they actually were - I'm not trying to rebook the entire summer of 2000, just trying to make this a good PPV, on par with WWF's generally excellent 2000 programming)....

First order of business is, lose Crash and Bull.  Both of them stunk, Crash was only over as a comedy Hardcore Champion, and neither of them had any business in this thing.  Replace them with the other two Radicalz, Dean Malenko and Perry Saturn.  I mean, why not?  You're booking a homegrown guy to win the whole tournament anyway, why not load the bracket up with strong workers so the tournament's actually good?  Second, only the best workers are making the semifinals.  Sorry Rikishi and Val, I know you were about to feud over the Intercontinental Title, but this ain't your night.

Angle and Perry have a fairly competitive 6-minute match which Angle wins after countering the 3-Handled Family Credenza into a lightning-quick Angle Slam.

The two familiar rivals have a dazzling technical showdown, putting to shame their underwhelming Starrcade '97 match.  As the bout nears its fifteen-minute time limit, Malenko goes for the top-rope gutbuster but Eddie counters, landing on his feet and rolling into a small package (with a bottom rope assist) for the surprise 14-minute win.

Benoit, out for revenge after losing the Intercontinental Title a week earlier, targets Rikishi's shoulder and relentlessly punishes it for much of the bout's 5-minute running time.  After Rikishi mounts a comeback, Benoit counters a Samoan Driver attempt and locks in the Crossface, which Rikishi withstands for nearly a minute before passing out.

The two charismatic Canadians have a very engaging eight-minute match full of solid athleticism, which culminates in Jericho raising his knees on a Money Shot attempt and landing his Lionsault for the win.


So right off the bat we have way better first-round action, with the four best guys in the tournament advancing to create intriguing semifinal bouts.

From there we go to a backstage segment where Hardcore Champion Pat Patterson and Gerald Brisco are talking about how awesome they are.  Crash Holly shows up, bashes them both with stuff, and pins Patterson to steal back his Hardcore Title.

Now for the semifinals....

Angle and Guerrero have a fantastic little match with fast-paced action that goes 10 minutes before Angle dodges a Frog Splash and hits the Angle Slam to advance.

For the third straight PPV the two rival Chrises lock up one-on-one, delivering another excellent back-and-forth match that steals the show.  At the sixteen-minute mark Benoit locks in the Crossface, but Jericho leans back and pins him to make the finals.


Now for that 4-Way Tag Title match, which ended up being the best thing on the actual PPV.  I'm nixing the stupid Dumpster Tables match and adding the Dudley Boyz to this 4-way, replacing Test & Albert.  We just got a Dudleyz-DX Tables match at the previous PPV and it sucked, so having another similar garbage match here is just redundant.  Skip it.  The 4-way is now Too Cool (I still can't understand why they got a title run) vs. Edge & Christian vs. The Hardy Boyz vs. The Dudley Boyz.  Bubba & D-Von are the first to go after five minutes when DX interferes, and Christian pins Bubba.  Grandmaster Sexay then takes a Twist of Fate/Swanton combo at the 8-minute mark, and we're down to E&C vs. The Hardys.  The next seven minutes are another dazzling tag team battle in which we WILL see new champs crowned.  Matt & Jeff have Christian beaten when Edge, after a ref bump, knocks Jeff out with a belt and rolls Christian on top of him.  The ref counts three while Edge has Matt tied up, and Edge & Christian are the new tag champions after 15 minutes.


And we've reached the tournament final:

Angle & Jericho blow away their February 2000 meeting with this 15-minute classic.  Both men come out of this match looking stronger, having each held their own.  Late in the match Jericho climbs to the top rope, but Angle quickly scales the ropes and belly-to-belly suplexes him off the top.  Exhausted, Angle drapes an arm over Jericho and the ref counts three, crowning Angle the 2000 King of the Ring.


For the main event, instead of a stupid six-man tag involving two non-wrestlers and a title change resulting from Rock pinning Vince, we now have a triple threat, pitting WWF Champion Triple H against his archenemy The Rock and the just-returned (and white-hot) "American Badass," The Undertaker.  The odds are stacked against Hunter, but he plays the two babyfaces against each other to even things up.  Late in the match Taker has Hunter beaten after a Last Ride, when Vince & Shane run to the ring for a distraction.  Just when it looks like Hunter's going to retain, Kane emerges and chokeslams both McMahons on the floor.  Hunter tosses Taker out of the ring, turns around and walks right into a Rock Bottom.  1-2-3, The Rock is the new champion after 17 minutes.

Much, much better, wouldn't you agree?  Let's look at that lineup one more time:

That there is a lineup that would showcase the company's incredible talent pool and leave everyone satisfied.  As opposed to the New England dumpster fire we actually got.  Kurt Angle still wins the tournament, but in much more impressive fashion, while Chris Benoit now actually has a little momentum heading into his WWF Title feud with The Rock.  And speaking of The Rock, he's just pinned the champion to regain the title, rather than beating a 55-year-old non-wrestler.  You put together a lineup like this and you're looking at one of the best King of the Ring PPVs the company ever did.


Posted by Justin Enuffa Ballard at 9:43 AM