In 2012 Dominion begins to feel like the company's second-biggest show of the year.....


The 2012 Dominion show was a very solid PPV headlined by the company's big new drawing card, the Hiroshi Tanahashi-Kazuchika Okada feud.  Tanahashi had carried the company on his back for five years already, dragging them out of their financial doldrums, but up until this point he hadn't yet faced a definitive opponent, the Rock to his Steve Austin.  That opponent finally arrived in 2012, in the personage of Okada, a prodigiously gifted 24-year-old who had shockingly dethroned Tana at that year's New Beginning and announced himself as New Japan's future centerpiece.  This edition of Dominion would center around the highly anticipated rematch, while the rest of the card would showcase the company's growing roster of supporting characters.

The opening six-man tag featured an insane amount of talent, as the DDT promotion's hottest stars crashed the party.  Kota Ibushi, Kenny Omega and Daisuka Sasaki faced Prince Devitt, Bushi and Kushida.  Ibushi and Devitt kicked off this incredibly athletic contest with mat-based grappling before tagging in Sasuke and Kushida, who demonstrated their impossibly quick Jr. style, and then Omega and Bushi paired off to hit the big crowd-pleasing moves.  This match got plenty of time for an opener and built to some spectacular moves and counters.  It boiled down to Ibushi and Bushi; the latter hit a top rope Spanish Fly but fell victim to Ibushi's Last Ride for the pin.  This was a super-fun opener with tons of Jr. Heavyweight action.  ***1/2

Another six-man tag followed, with a totally different style of wrestling, as Tomohiro Ishii led Chaos partners Yoshi-Hashi and Rocky Romero against Yuji Nagata, Wataru Inoue and Captain New Japan.  Ishii and Nagata began and largely closed this match, with awesome stiff back-and-forth fighting.  Inoue got a few moments to shine as well, at one pointing leveling Yoshi and Romero with a double rolling spear, but then Chaos got the advantage and Rocky and Yoshi had an amusing moment, arguing over taking turns with Rocky's signature corner clotheslines.  Finally Captain New Japan tagged in and controlled the match for a bit, but while holding Ishii for a Nagata lariat, Ishii ducked and Nagata nailed the Cap.  Ishii then hit his brain buster for the win.  Ishii and Nagata continued fighting after the bell and had to be separated.  Also a fun little match.  **3/4

Third up was Taichi & Taka Michinoku vs. Jushin Thunder Liger and Tiger Mask IV.  This started out with mucho stalling from the heels, who spent the first half cheating and double-teaming both masked opponents.  Taichi tried on numerous occasions to unmask Liger, and after a ref bump Taichi used a chair and started tearing off pieces of Liger's headgear.  But Liger had prepped for this, revealing that his face was heavily painted beneath the mask, and red-misted both Taichi and Taka before powerbombing Taichi through a table.  Tiger Mask then hit the tiger suplex for the win and presented Liger with a new mask after the bell.  This was chaotic but entertaining.  **1/2 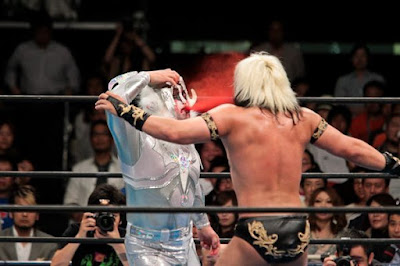 Yet another tag match followed, as future Bullet Club stablemates Karl Anderson and Tama Tonga faced MVP and Shelton Benjamin.  I went into this ready to dismiss it as a throwaway, but all four guys worked hard to make it interesting.  Tonga, sporting Jimmy Snuka gear, broke out some of Snuka's moves late in the match.  His sequences against Shelton were crisp and cleverly worked.  In the closing moments Tonga found himself perched on the top rope for a flying bodypress, but Shelton vaulted to the top and overhead-threw him off, following it up with a reverse Zig-Zag for the win.  This was an easy watch.  **3/4

The first of three singles bouts arrived in the fifth slot, as Jr. Heavyweight Champion Low ki faced Ryusuke Taguchi.  This was fast and furious to start, but after a few minutes Low Ki attacked Taguchi's knee and spent the middle sections of the match working it over.  Taguchi played the role of defiant babyface, always fighting back from underneath.  Late in the bout both men hit their respective finishers for near falls, Low-Ki's Ki-Krusher and Taguchi's double underhook flapjack.  Taguchi went for his move a second time but Low-Ki double stomped his knee in mid-air and slapped on a sharpshooter.  Taguchi finally made the ropes and staged a comeback, but both men wound up on the top rope.  Low-Ki knocked off Taguchi, who landed in a Tree of Woe, leaving him open for a patented Low-Ki corner double stomp for the pin.  This was a strong Jr. match with a story and some big spots.  ***3/4

The one miss of the night was the IWGP Heavyweight Tag Title match, as champions Toru Yano and Iizuka defended against Tencozy.  This kicked off with a big brawl outside that resulted in a double countout after two minutes.  Tencozy protested and the referee inexplicably agreed to restart the match, which would ultimately be thrown out anyway.  That there is some pointless overbooking.  Most of this match also consisted of nondescript brawling, though Yano's moments against both babyfaces were better at least.  The match ended with a ref bump and a chair battle, until Red Shoes ran in and threw the match out.  Meh.  This was not my kinda match.  *3/4

The final, and best, tag match of the night pitted Hirooki Gogo and a fresh-faced Tetsuya Naito against Shinsuke Nakamura and Masato Tanaka (or as I like to call them, TaNakamura).  This kicked off with really fast-paced, stiff exchanges before the heels settled down to get some ruthless heat on Naito.  Nakamura played the arrogant, flashy badass to perfection and made me realize how much I miss this version of Shinsuke.  Eventually Naito made the tag to Goto, who had a killer exchange with Nak, countering a Boma Ye attempt with a sick lariat that turned Nak inside-out.  Naito and Tanaka each tagged in and had their own blazing exchange.  Naito kicked out after a Tanaka brain buster/sliding lariat combination (is that where Ishii got his finishers from?), and reversed a second sliding lariat into a rollup.  But Nakamura came out of nowhere with a Boma Ye, allowing Tanaka to hit a sliding forearm for the win.  This was excellent.  ****

The semi-main event was an austere slugest between legit tough bastards Minoru Suzuki and Togi Makabe.  The two grizzled warriors began with a painful striking battle, and Suzuki the superior MMA athlete took the first round.  Makabe got up to go again, and took the advantage the second time, but Suzuki went after his leg and used the security railing to work it over.  Suzuki made use of his extensive submissions, but Makabe called upon his superior power to fight back.  Late in the match Suzuki snared a heel hook three separate times but Makabe escaped.  After the third, Suzuki locked in a choke, but Makabe reversed into a Death Valley Driver, followed by a hard-earned spider suplex.  Suzuki got to his knees and Makabe hit a King Kong knee to his face, then another to the back of his head for the pin.  This was a rugged, NEVER Openweight-style fight and a worthy penultimate match.  ***3/4 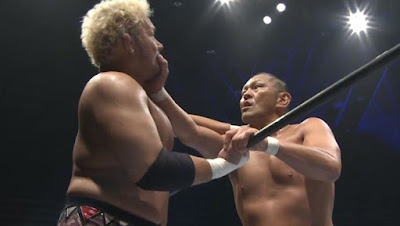 New Japan's first legendary feud in many years had its second chapter in this Dominion main event.  The youthful champion Kazuchika Okada, already carrying himself like an icon, defended against the company's megastar Hiroshi Tanahashi.  This 28-minute contest began with what would become their trademark clinical grappling, with Tanahashi eventually targeting Okada's leg.  After some minutes they jockeyed for position and Okada hit a crisp-as-hell dropkick that knocked Tana off the top rope and out of the ring.  Okada worked Tana's neck over with the railing, rolled him back in, and used multiple submissions to inflict more damage.  Tana came back with more leg-centric offense and hit a Hi-Fly Flow on the outside.  Both men broke out all their signature moves in the second half; Okada hitting his big dropkick, Deep in Debt, and top rope elbow before missing with a Rainmaker.  Tana hit two dragon screws, two Texas cloverleafs which Okada escaped, the straitjacket suplex and a dragon suplex, but missed the Hi-Fly Flow.  The match built to a spectacular series of counters and reversals before Tana caught a slingblade and match-ending Hi-Fly Flow, which the Osaka crowd went nuts for.  Of note is that Okada never hit his well-protected Rainmaker in this match, giving him an out.  This was a fantastic main event that these two would actually top several times over the next six years.  Easily the best Dominion match thus far in the series.  ****1/2 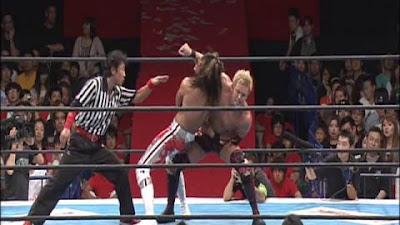 The 2012 edition was definitely the strongest so far, with two ****+ matches that included an tone-setting main event, plus some very good undercard fodder.  Okada-Tanahashi was of course the feud that created the modern NJPW buzz, elevating the company creatively and financially while helping to expose the product to an international audience.  New Japan's product would grow leaps and bounds over the next few years, fully morphing into the NJPW we know today. 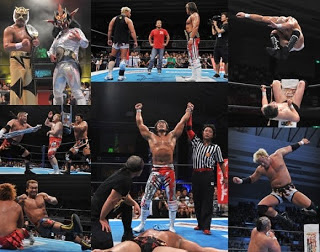