Oh yes, oh yes, the wrestling-obsessed weirdo is back with another PPV History series, here at Enuffa.com!  This time we'll be looking at the decade-long lineage of NJPW's second-biggest PPV of the year, Dominion!

Set the way-back machine for 2009, when New Japan Pro-Wrestling was still in serious rebuilding mode, having weathered the lull of the early 2000s.  They'd hitched their wagon to a dynamic young performer named Hiroshi Tanahashi, and his gargantuan charisma, coupled with his incredible knack for in-ring storytelling, almost singlehandedly lifted NJPW out of its financial woes.  At this point Tanahashi was head-and-shoulders above everyone else in the company, but numerous young stars were being groomed for big things and by 2009 a few were starting to nip at Tana's heels.  The modern New Japan product as we know it was taking shape, with a combination of native stars and talented gaijin, and only a few years later it would start to blow everyone else out of the water from a creative standpoint.  So sit back and let's take a stroll through recent New Japan lore....

Things kicked off with a solid little opener, as Jushin Thunder Liger and Akira faced Koji Kanemoto and a young lion named Nobuo Yoshihashi. Everyone worked hard in the seven-or-so minutes alotted. Finally Yoshi-Hashi ate a top rope splash from Akira for the pin.  Shockingly little from Liger in this match.  Not terribly memorable but decent.  **1/4

Next up was Takao Omori and Yutaka Yoshie vs. Mitsuhide Hirasawa and Super Strong Machine.  This was another short match, only five-and-a-half minutes, but it was full of action. Yoshie at 300+ pounds got to show off his deceptive agility.  The match ended with Omori hitting a running STO on Hirasawa. Nothing special here, but this was well worked.  **

The first really noteworthy match was third, as Apollo 55 faced Taichi and Milano Collection AT for a Jr. Heavyweight Tag Title shot.  These guys cut a crazy fast pace for the first few minutes, then Taichi and Milano slowed it down to work over Taguchi.  After the eventual hot tag to Devitt we got a crazy series of big moves and nearfalls, including an outside-the-ring Doomsday Device cross body on Taichi, a Devitt double stomp for a near fall, and a big Tower of Doom spot.  Finally Taguchi pinned Taichi after a (surprisingly safe-looking) vertebreaker and chicken wing face buster.  One thing really struck me about this match: Taichi used to be a worker!  When did that change?  Anyway this was a damn good match.  ***3/4 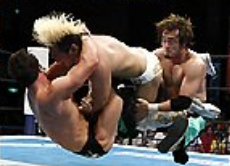 The show's weakest bout was next as Tiger Mask IV faced Black Tiger.  This was a short, sub-five-minute match but was still pretty heated. Black Tiger attacked before the bell and tried to take off Tiger's mask; on the second attempt he actually got it most of the way off before Tiger Mask stopped him.  Tiger Mask then did a pele kick and the mask fell off completely as he scrambled to put it back on.  The match ended shortly thereafter with a Tiger Mask standing moonsault followed by a double arm stretch for the submission.  Tiger Mask continued to attack Black Tiger after the bell and ended up removing his mask (with an assist from Koji Kanemoto).  Not much to this one.  *3/4

A blistering eight-man war was next as Shinsuke Nakamura (somewhere between his MMA persona and his "artist" one) led Tomohiro Ishii (with hair), Iizuka and Jado against Hiroyoshi Tenzan, Tomoaki Honma, Yuji Nagata and Wataru Inoue.  This was twelve minutes of nonstop action from bell to bell, and everyone got to shine for a little bit.  The best stuff involved Ishii and Nagata trying to murder each other with forearm shots and clotheslines.  Toward the end the action spilled all over ringside, leaving only Nakamura and Inoue in the ring.  Nak hit a reverse exploder and an early-stage Boma Ye for the pin.  Really fun match. ***1/4

Perhaps the unexpected hit of the night goes to Go Shiozaki vs. another young lion by the name of Kazuchika Okada.  These two had a damn good little match.  I expected Okada to get killed here given his "black trunks" status, but it speaks volumes of how highly NJPW already thought of Okada at 21 that he was booked to hold his own against the GHC Champ. This was a stripe-earning match for sure, and baby Okada already looked like a prodigy here, taking tons of stiff offense while never staying down; at one point he ate a brutal clothesline and kicked out at one, and the crowd popped big.  Finally Okada fell to the Go Flasher, and after the match Go offered him a handshake.  A defiant Okada slapped him instead, and Go slapped him down hard.  This was a helluva match for 8.5 minutes.  ***1/4

Next up was the token garbage match, as Team 3-D defended the IWGP Tag Titles against Bad Intentions.  This was a wild brawl with all the usual Dudley bells and whistles - outside the ring fighting, weapons all over the place, and a terribly obvious blade job by Karl Anderson after Bubba took a cheese grater to his head (The director inexplicably chose to keep the camera tight on him as he did this).  Giant Bernard was super over and came off like a monster; at one point after losing an exchange, Bubba went to tag D-Von but D-Von refused to get in there with Bernard.  Late in the match after recovering from a 3-D, Bernard hit a choke bomb through table on D-von for a near fall.  Team 3-D tossed Bernard and hit a tandem powerbomb through a table on Anderson for the win.  This went a little long at 18 minutes, but was pretty entertaining.  ***1/4 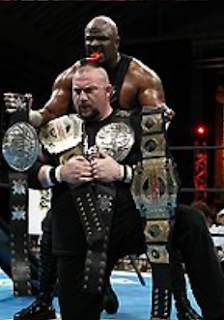 Finally we got a string of big-time singles bouts, starting with NOAH's Takashi Sugiura vs. the recently returned Hirooki Goto, in a stiff, rugged fight. Both guys seemed to hit each other as hard as they could, and peppered the match with tons of suplexes including one each off the top rope (something you don't see often). Goto showed fire after taking a superplex, refusing to show the pain, but Sugiura put him away after 14 mins with multiple Angle slams (that dropped poor Goto right on his head and neck) and a running knee. This was a helluva strong style fight. ***3/4

The semi-main event slot went to a real bloodbath, as Togi Makabe faced former Most Violent Players tag partner Toru Yano.  This was of course before Yano became a comedy wrestler and was instead a ruthless, bloodthirsty rulebreaker; I like this Yano.  Ishii interfered early from Yano's corner, allowing Yano to split Makabe's forehead open with a chair shot, one of the more gruesome blade jobs in recent years.  They brawled through the crowd for a while before making their way back to the ring, and Makabe caught a drop toehold that sent Yano into an exposed turnbuckle, busting him open as well.  After a ref bump, Ishii ran in again only to be chased by Makabe's cornerman Tomoaki Honma.  Makabe hit a Spider Suplex but was attacked by Iizuka with his iron fingers before he could hit the knee drop.  Iizuka was chased away by Tenzan, Makabe clotheslined Yano with his chain and went for the knee drop again, but Nakamura appeared out of nowhere and pushed him off, followed by a Boma Ye.  Yano then hit a power bomb for the tainted victory.  This was a bloody, intense brawl that felt old-school up until the excessive run-ins, but a overall pretty good match. *** 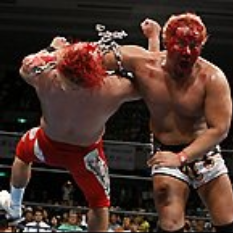 Our main event for the IWGP Title (one of only two title matches on the show) pitted the monstrous Manabu Nakanishi vs. New Japan's star attraction Hiroshi Tanahashi.  Nakanishi looked enormous, Tanahashi looked impossibly svelt - a classic monster heel vs. handsome babyface dynamic.  They started off with mat grappling which gave way to a toe-to-toe standup fight, with Tana mostly getting dominated by refusing to back down.  Finally after several minutes Tana went after Nakanishi's knee and worked it over.  Nakanishi muscled through the punishment and regained the advantaged via superior striking and power, hitting an over-the-top rope plancha and a superplex, followed by an impressive missile dropkick.  Tanahashi went after the legs again, locking in a cloverleaf, then went for a Hi-Fly Flow but Nakanishi caught him in midair and effortlessly converted into a Torture Rack.  Tanahashi countered with a dragon sleeper, which Nakanishi countered back into a Rack, followed by a gutbuster.  In the closing moments we got a standing strike battle, with an exhausted Tana barely able to stand.  Nakanishi went for another Rack but was countered with a pair of sling blades.  Tanahashi hit a straitjacket suplex, followed by a dragon suplex and two Hi-Fly Flows to win the championship.  A really well-worked David vs. Goliath story and a pretty epic 31-minute main event.  Early prime-years Tanahashi does it again.  ****1/4 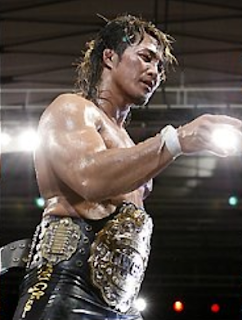 The inaugural Dominion may not have been as stacked as recent editions but the puzzle pieces were beginning to fall into place for what the loaded NJPW roster would soon become.  Hiroshi Tanahashi and his growing cast of supporting characters were taking over the company from the previous guard, and what we got was a strong night of wrestling that for me eclipsed that year's WrestleKingdom show.  Well worth checking out both for historical purposes and for a slew of good-to-very-good matches capped by a fairly outstanding main event.


Posted by Justin Enuffa Ballard at 8:53 AM