Welcome to our second installment of NJPW Dominion History, here at Enuffa.com!


Dominion returned to Osaka in 2010 with another solid if not stacked show, with some frankly odd star placements.  Manabu Nakanishi for example, who headlined Dominion 2009 as the IWGP Champion, showed up here in the second match of the night with five other dudes.  Shinsuke Nakamura, another former IWGP Champ, was billed fourth from the bottom in a brief MMA-infused fight with Daniel Puder of all people.  And Tanahashi, the company's golden goose was in the hair vs. hair semi-main event instead of contending for the strap.  Some strange choices to be sure, but the show itself managed to be very watchable and a few bouts were pleasantly surprising.

The 2010 edition opened with one of two six-man tags, with Akira, El Samurai and Koji Kanemoto squaring off against Ryusuke Taguchi, Super Strong Machine and baby Tama Tonga (sporting short hair and a clean-shaven look)! This was not much of a match, running under nine minutes and not featuring a lot of memorable action. El Samurai pinned Tonga with an abdominal stretch rollup thingy.  Moving on.  *1/2

The second six-man was a little better but still just sorta there, as Chaos members Tomohiro Ishii, Iizuka and Gedo faced Manabu Nakanishi, Mitsuhide Hirasawa and a blond-haired Kushida.  There was a big brawl before the bell to kick things off, climaxing in Kushida and Nakanishi dives over the ropes.  Then the match settled into the heels getting heat on Hirasawa after hitting him with chairshots outside.  Eventually Nakanishi tagged in for some big power moves, Kushida and Gedo did some fun Jr. exchanges, and Iizuka distracted the referee while Gedo nailed Kushida with a kendo stick.  Iizuka then choked Kushida out for the win.  Another forgettable affair.  *3/4

The good stuff started next, as Tomaki Honma vaced Muhammed Yone in a solid, super stiff contest.  We got tons of brutal chops, forearm shots and running lariats over the bout's nine minutes and finally Honma hit his big top rope headbutt for a near fall but Yone came back and delivered a muscle buster for the win.  Not too shabby, this one.  **3/4
The surprise hit of the night was the aforementioned MMA-type battle between Shinsuke Nakamura and a rather doughy Daniel Puder.  MMA wrestling matches can go either way and are often terrible, but this featured good transitions and reversals, and the grappling looked crisp and believable.  Toward the end of the match Nak escaped a kimura and transitioned to a cross-armbreaker, then hit two Boma Ye knees to win.  Not bad at all, actually.  **1/2 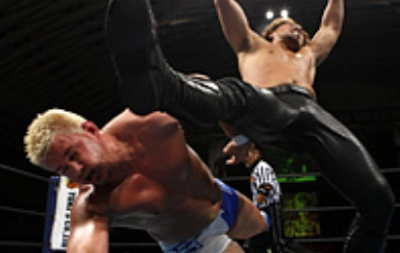 Hirooki Goto followed up his strong Dominion 2009 showing with a hard hitting match against Masato Tanaka.  This had a very fast pace throughout but somehow built in intensity as it went along.  Goto hit superplex followed by a top rope sunset powerbomb, a yushi goroshi and his patented Shouten Kai (love this move), but Tanaka amazingly kicked out and smashed Goto with two sliding forearms for a near fall.  Both guys got to their feet and almost knocked each other out, but Goto landed a big clothesline and another Shouten for the win.  Easily the best thing on the show so far.  ***1/2 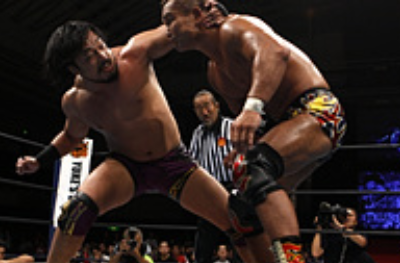 Bad Intentions further established themselves as the 2010 centerpiece of the heavyweight tag division in a Three-Way Elimination match for the IWGP straps, against No Limit (Yujiro Takahashi and a baby Tetsuya Naito) and the current champs Yuji Nagata and Wataru Inuoe.  While all three teams were still in this match was nonstop action, featuring innovative tandem moves from No Limit, who controlled a lot of the match and was stealing the show until Nagata and Bad Intentions teamed up on Naito with three avalanches and a backdrop driver for the pin.  Once down to two teams the bout slowed down, with Bad Intentions double-teaming Nagata for minutes until Inoue made the save.  At the end all four men were in the ring, Bernard and Nagata spilled outside, Inoue went for a spear but Karl Anderson (looking as lean as I've ever seen him) dodged, leaving Inoue to hit the turnbuckle pad and bounce directly into a Gun Stun.  Very enjoyable tag bout.  ***1/4

The show stealer of the night was next, as Jr. Heavyweight Champion Naomichi Marufuji defended against Best of the Super Juniors winner Prince Devitt.  We started off with an extended series of crazy chain grappling, after which Marufuji took a powder.  Devitt hit his signature dive to the outside but tweaked his knee and Marufuji dropkicked his knee from behind to the knee to take over.  Marufuji then targeted Devitt's knee for the next several minutes, but Devitt fought back from underneath, building to some spectacular back and forth exchanges and nearfalls.  Devitt hit a pair of double stomps off the top but Marufuji kicked out.  Marufuji went to set up a superplex, but Devitt jockedy for position and hit a death-defying Bloody Sunday off the top rope to become the new Jr. Heavyweight champ. Helluva match that showcased Devitt as an emerging cruiserweight star.  ****1/4 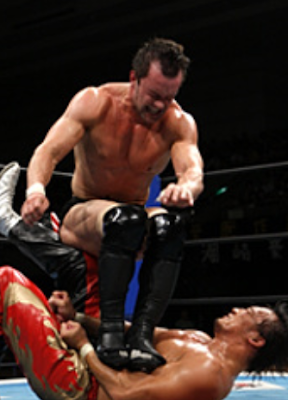 The semi-main event was a Hair vs. Hair match between Hiroshi Tanahashi and Toru Yano.  Yano came out wielding a pair of scissors, and the match began in the crowd after Yano threatened to cut a fan’s hair.  Tana dominated the early brawling, hitting a cannonball off the apron, but Yano took over shortly thereafter by using a chair with "Chaos" spraypainted on it.  The action got back in the ring and there was a forearm war, followed later by Tana's Straitjacket Suplex, a slingblade, and a Hi-Fly Flow to Yano's back.  Yano got his knees up on the second HFF attempt and cradled Tanahashi for a nearfall.  The match climaxed after a series of traded cradles and rollups.  We got a ref bump and Yano hit Tana with a brutal chair shot, nailed his powerbomb and got a two-count.  Tanahashi suddenly came back with a slingblade into a crucifix pin to win the match out of nowhere.  After the bell Yano knelt down and teased letting Tana shave his head honorably but then hit Tana with a nut shot and tried to shave him instead.  Young Lions Fale and Tama Tonga, plus Kushida came to Tana's aid but Iizuka helped Yano toss them out.  Finally Tajiri made a surprise rescue, misting both heels, and Tanahashi got to shave a big trench down Yano's head.  This was entertaining but just okay, especially for the semi-main event slot.  **3/4

Our main event pitted IWGP Champion Togi Makabe against Go Shiozaki, in a battle of two burly dudes going toe-to-toe.  This went twenty minutes and had a ton of back-and-forth action, with very few extended sequences of one guy in control.  The match built to a peak of traded forearms and clotheslines, with Makabe getting the upper hand momentarily.  Go then countered a spider suplex attempt by ramming Makabe into the top of the post.  Go hit a top-rope hip toss, a fisherman buster, and a moonsault (after two tries) for a two-count.  Makabe came back with a series of lariats before finally hitting the spider suplex/King Kong knee drop for the win.  This was a good, rugged match but didn't really feel like an IWGP Title bout; certainly nowhere near the quality of the 2009 main event.  ***1/2 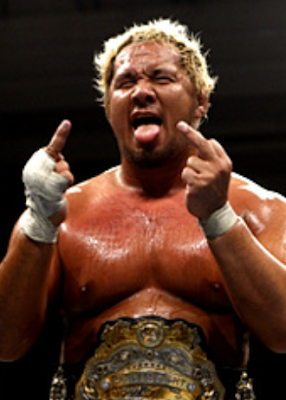 So the 2010 Dominion was a step down from its predecessor with weaker pairs of openers and closers, but still entertained and was easy to sit through.  The big standout was obviously the Jr. Heavyweight match and it was great to see that get as much time as the main event.  The rest of the show was fine but nothing mindblowing.  Dominion would see much higher peaks in the coming years.

Best Match: Naomichi Marufuji vs. Prince Devitt
Worst Match: Opening six-man
What I'd Change: I could've done without the first two matches but they were innoffensive.
Most Disappointing Match: I guess I expected more from Tanahashi vs. Yano
Most Pleasant Surprise: Nakamura vs. Puder was very watchable
Overall Rating: 7/10