The Tanahashi Magic Train keeps rollin' on and this would be the final Dominion powered exclusively by The Ace.


**NOTE: NJPW World is missing three matches from this show: Koji Kanemoto-Hiromu Takahashi, the Kendrick/Gedo/Jado-Liger/Kushida/Tiger Mask six-man, and the Tenza/Seigigun-Ishii/Tanaka/Iizuka six-man.  Their combined running time is a shade under 21 minutes though, so I get the feeling I wasn't missing anything essential.**

Dominion 2011 was for me kind of a middling show with a couple standouts.  There wasn't anything bad, but most of the card fell into the 2s and 3s for me.  NJPW was still running on high-octane Tanahashi fuel but the Jr. division also featured some of the best talent in the company.  One thing I found odd about these first three Dominions is that Chaos was the top heel stable but wasn't being featured much in title matches.  And strangely absent from this show altogether was Chaos's leader, Shinsuke Nakamura.  This show could've used his presence for sure.

The first match available on New Japan World was Ryusuke Taguchi vs Mascara Dorada for the CMLL Welterweight Title.  This bout started off somewhat methodically with some initial feeling out but both guys pretty quickly brought out the top rope dives.  Dorada nearly killed himself on a botched second-rope springboard, when his foot caught the top rope causing him to under-rotate; the back of his head hit the apron on the way down and it looked like he hyperextended his knee on the floor.  Miraculously he was able to continue, attempting the same move moments later and nailing it, much to the crowd's delight.  The second half of the match had some good lucha-style exchanges, leading to a series of traded victory rolls with Dorada holding one long enough for the three-count.  This match was solid but too short to be much more.  **3/4

Skipping ahead to the fifth match of the night, former No Limit tag partners Tetsuya Naito and Yujiro Takahashi locked horns in a match that started out very heated but settled into an oddly slow pace for a grudge match.  Naito top-rope dropkicked Takahashi at the bell and followed it up outside with a running dropkick on the ramp.  Back in the ring Takahashi took over for a long stretch that was fine but a bit tedious at times.  One thing was evident from this match though - Tetsuya Naito has seemingly always had a recklessness about landing on his head.  Three times during this match he would do a running dive or a flipping bump and just barely avoid breaking his neck.  Late in the match he also took a high-angle Olympic slam that looked crippling.  After about eleven minutes Takahashi won with a Dominator.  This was decent but I expected more given the nature of their feud.  From this match it's clear why Naito became a huge star and Takahashi did not.  ***
The first of two card highlights pitted Prince Devitt against Kota Ibushi for the IWGP Jr. Title.  This featured crisp grappling to start, and within minutes both guys teased their big diving moves.  Devitt took over with a running dropkick off the apron, then slowed things down for a while.  Ibushi fought back, nailing the Golden Triangle moonsault, and the bout built in intensity as he created some space and sped things up.  There was a weird miscue as Ibushi went for a top rope hurricanrana that Devitt seemed to counter into a powerbomb, but both guys hesitated and ended up landing in a heap on the mat.  From there they traded strikes and Ibushi hit a snap dragon suplex, then went for a moonsault, which Devitt countered with knees and cradled him for two.  Devitt scored a Bloody Sunday DDT but Ibushi kicked out at two.  Devitt nailed him with two top-rope double stomps but Ibushi still kicked out, to a huge pop.  Finally Devitt pulled him up to the top rope for a super Bloody Sunday, but Ibushi countered with a hurricanrana, followed by a Last Ride.  Devitt kicked out at two, and Ibushi landed a picture-perfect Phoenix Splash to win the strap.  They've had better matches, but this built to a pretty fantastic peak.  Damn good stuff.  **** 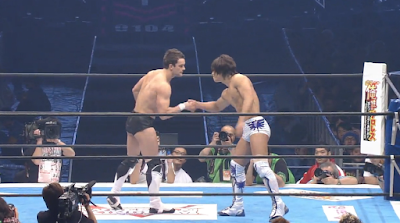 A special tag match was next, as Togi Makabe and Satoshi Kojima faced the original Killer Elite Squad, Lance Archer and Minoru Suzuki.  This kicked off with the two power brokers; Makabe and Archer exchanged shoulder blocks to assert dominance before tagging in their respective partners.  Suzuki and Kojima had a brutal chop war and traded forearms and kicks.  Taichi interfered to give KES the advantage, and they worked over Kojima for several minutes before the hot tag to Makabe.  Late in the match the babyfaces teased dissension after Makabe accidentally hit Kojima, but it was a ruse to draw Suzuki into a double-team.  The match culminated with all four men in, but Suzuki rocked Kojima with a sliding knee and Gotch piledriver to get the pin.  This was a well-worked, intense brawl.  ***1/2

2011 saw the inception of the IWGP Intercontinental Title, first held by WWE castoff MVP.  He would defend the title here against Toru Yano, in a rather forgettable affair; quite a far cry from today's I-C Title bouts.  This began with Yano offering a handshake but trying to crush MVP's hand.  That backfired thanks to MVP's superior strength, and he controlled the early minutes of the match.  Yano took over after pulling him off the second rope, and resorted to his usual outside the ring brawling.  Yano removed a turnbuckle pad and whipped MVP into the exposed metal multiple times.  MVP came back with an overhead throw and triple German suplexes.  Yano answered with a slingshot into the exposed buckle and a powerbomb, but MVP kicked out.  MVP stole a quick pin with an O'Connor roll, but after the bell an indignant Yano whacked him with a chair and cut his braids off to continue the feud.  Eh, not much of a match here.  **

The low point of the night for me was the IWGP/GHC Tag Championship between Bad intentions and Yoshihiro Takayama & Takuma Sano.  Anderson and Bernard looked good here, but their aging opponents dominated much of the match with sluggish, nondescript offense.  Sano hit two double stomps off the second and third ropes that looked about as gentle as such a move could look.  The bout finished after Sano ate a Magic Killer and kicked out but fell victim to a Tombstone-type move from Bernard.  I've read multiple good reviews of this match but I didn't like it much, especially in the semi-main event slot.  *3/4

The main event added probably a full letter grade to this otherwise lackluster show, as Hiroshi Tanahashi once again showed everyone how big-time wrestling is done, in an IWGP Title defense against Hirooki Goto.  The story of this match was that Tanahashi was the superior grappler but Goto was the better striker.  Repeatedly this match came down to a standup fight, and Goto would get the advantage but Tana would demonstrate his deep resourcefulness to negate Goto's power.  The match started with grappling, Goto won a striking battle, and Tana targeted his knee.  Goto regained control after the old Savage-Steamboat spot where Goto tossed Tana over the ropes, Tana skinned the cat back in, and Goto lariated him out anyway.  The match escalated to a sequence with a ton of counters and reversals, Goto escaped a Cloverleaf and hit a sunset bomb off the top, Tana hit a straitjacket suplex, slingblade and Michinoku driver but missed a Hi-Fly Flow.  Goto hit a sliding lariat to Tana's back and a devastating yushi guroshi off the second rope, followed by a sick-looking spinning flapjack for a two-count.  He then went for the Shouten Kai but Tana blocked, hit a lariat and two dragon suplexes, finishing Goto off with a pair of Hi-Fly Flows for the win.  This was a fantastic, intense main event and the best match of the entire Dominion series up to this point.  ****1/2 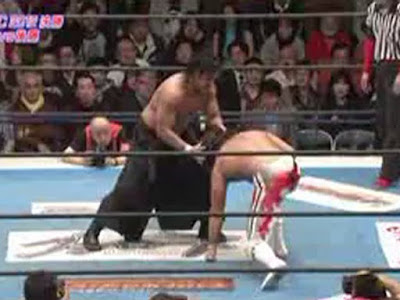 The 2011 Dominion was definitely an uneven show, featuring a slew of mostly pretty short bouts but climaxing in an excellent championship main event.  On paper this show looked a little stronger than it ended up, and for me only two matches really stood out from the pack.  But it was an easy-to-watch PPV despite being the weakest of the first three editions.  Business would pick up big the following year, both creatively and financially....

Best Match: Hiroshi Tanahashi vs. Hirooki Goto
Worst Match: Tag Team Championship
What I'd Change: I'm not sure why Nakamura wasn't around, but get him on this card!
Most Disappointing Match: Probably Taguchi vs. Dorada, as I expected something blazing
Most Pleasant Surprise: The KES match
Overall Rating: 6.5/10


Posted by Justin Enuffa Ballard at 9:49 AM