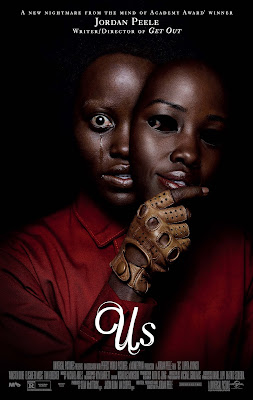 Jordan Peele's sophomore effort, the dread-filled Us, is one of those horror films that comes and goes as you watch it, and you leave the theater saying, "That was real good stuff."  Then your brain begins to recall all the little touches you weren't paying attention to because you were wrapped up in the story, and a few hours later you find yourself saying, "Dammit, now I need to watch that again."  Like The Shining (an obvious influence that gets more than one nod from Peele), Us lends itself to multiple viewings and is dripping with subtext and social commentary.

The simple narrative of a vacationing family confronted by their horrific dopplegangers plays a lot like a feature-length Twilight Zone episode (I won't say any more about the plot; it's better if you go in cold), but Peele and his collaborators create arresting visuals and audio to fill every scene and frame with palpable unease.  Michael Abels' score particularly stands out, with a creepy-as-hell choral/Gregorian intro piece and a few cues that again bring to mind Kubrick's horror masterpiece.  Mike Gioulakis (of It Follows and Split fame) quotes other filmmakers (I defy anyone to watch the sequence on the beach and not think of Jaws, even aside from the young boy's T-shirt), while adding his own visual style.

And of course there's the cast.  Led by a(nother) extraordinary performance from Lupita Nyong'o, in a dual turn that was so convincing I had to constantly remind myself she was playing both parts, the actors embody "everyman" types in their primary roles, while being operatically frightening as their alternates.

The craftsmanship on display elevates Us from a horror B-movie into a suspenseful, sophisticated parable about class distinctions, race and xenophobia that leaves everything open to multiple interpretations.  Like Ridley Scott did with Alien, Peele has populated the screen with accomplished actors and striking visuals to reward the viewer with not only visceral suspense but an evocative pictorial and aural experience.

For me the first viewing was about revealing the secrets of the film's story.  The second and beyond will be about unwrapping its various underlying themes and appreciating the artistry that went into it.  Us is a rare horror film that will haunt you long after you've stopped watching it, and for me that's the best kind there is.


Posted by Justin Enuffa Ballard at 11:00 AM