NJPW/ROH G1 Supercard: New Japan Is Awesome, ROH Not So Much

Well one thing was made abundantly clear at G1 Supercard; Ring of Honor needs NJPW way more than NJPW needs Ring of Honor.  For a company that was once the pinnacle of in-ring wrestling (check out their 2004-2009 library if you don't believe me), ROH has fallen far indeed.  Most of the ROH-centric contributions to G1 felt like I was watching TNA - a flat women's match that ended with Angelina Love and Velvet Sky laying out the new WOH Champion, a street fight that went from a singles match to a six-man and went on forever, Enzo and Cass of all people joining the promotion, and a solid but overlong ladder match with the least over guy walking away with the ROH Title.  This was like watching two separate shows.  One was pretty great, the other was kinda brutal.  Just listen to the live crowd; they're all chanting "New Japan" during the intro, the New Japan-heavy matches all got great reactions while the ROH stuff was mostly muted.  Hell, the show sold out last year with only three names having been announced: Okada, Naito and Tanahashi.  ROH may have helped open the door for New Japan to grow their US audience, but New Japan sold out this show. 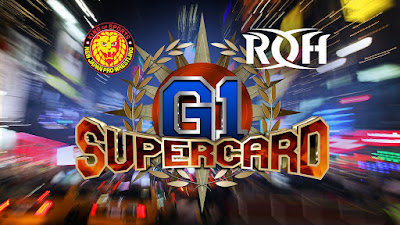 Let me start though by saying how surreal it was to see these two companies in a sold-out Madison Square Garden.  That factor added a ton of splendor to this show, and if you just watch the opener and the final six matches you'd have yourself a near-perfect PPV.  I'm certainly not here to bash the show as a whole, this was the second-best big show of the weekend.

After a forgettable pre-show Honor Rumble that went a taxing 42 minutes (the lone memorable moment was Liger vs. Muta, which sadly didn't last long), the show proper kicked off with a fairly fantastic Will Ospreay-Jeff Cobb match for both the NEVER and ROH TV Titles.  The clash of styles made for a very compelling match, as Ospreay's speed met Cobb's brute strength.  Ospreay however tried to play Cobb's game, often standing toe to toe with his much larger opponent, and in the end it cost him.  He went for a top-rope Stormbreaker but Cobb reversed it into Tour of the Islands (followed by a second one) and pinned him to win the NEVER Title.  I was a little sad to see Ospreay drop the belt already but Cobb is tailor-made for the NEVER division and I certainly won't complain about seeing more of him in NJPW.  Helluva good opening match that could've gone a little longer.  ***3/4 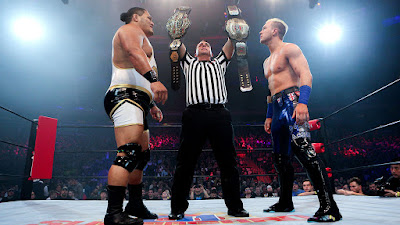 Second on the card was the first ROH-exclusive match, and it went fifteen seconds.  In fact my feed cut briefly and by the time it came back the match was already over.  Rush pounced on Dalton Castle at the bell, hit him with two finishers, and it was done.  Oookay then.  Castle flipped out and beat up his entourage after the match.  NR

The third match was to be Kelly Klein's crowning moment as the new centerpiece of the ROH Women's Division, but unfortunately the crowd basically didn't care about this at all.  Klein and Champion Mayu Iwatani had a passable match that suffered from zero crowd heat, ending with two K-Power drivers and Klein standing tall as the new champion.  Then Love and Sky came out, and Mandy Leon (who'd been the guest commentator) appeared to rush to Klein's aid only to turn on her.  This was right out of an old Impact episode and the crowd pretty much hated it.  The match itself gets **.  The angle stunk.


Further bad TNA callbacks followed, as rapper Mega Ran came out and did a lame song, which no one wanted to hear, only for Bully Ray (the supposed heel) to confront him and beat him up, much to the crowd's delight.  Bully's scheduled opponent Juice Robinson had been attacked earlier in the night by a mystery assailant, so Flip Gordon answered Bully's challenge instead.  Then after Shane Taylor and Silas Young appeared to help Bully gang up on Gordon, Juice came out anyway, flanked by Mark Haskins to make it a six-man Street Fight.  This was a mildly entertaining match but was, again, way too reminiscent of bad TNA programming.  The most memorable thing was the kendo stick shots to Gordon, which left ugly welts all over his back.  The match ended with the babyfaces doing "Whassuuup" on Bully (to which his hilarious reaction was "Oooh, my balls!"), followed by Gordon's 450 for the pin.  This match went way too long, the crowd wasn't that into it, and it felt totally out of place on this show.  **

At this point I was thinking "Jeezus, this show is disappointing so far."  Fortunately it was smooth sailing from here on out.

Next up was one of the best nine-minute sprints you'll ever see as Taiji Ishimori defended the Jr. Title against Bandido and Dragon Lee.  These three swung for the fences from the opening bell to the end, with just crazy spots throughout.  The end of the match saw Bandido hit a moonsault fallaway slam on both opponents (insane), only to fall victim to a Liger bomb by Dragon Lee for the pin.  They obviously should've taken five minutes away from the Bully Ray match and given it to this one, but this was still awesome.  **** 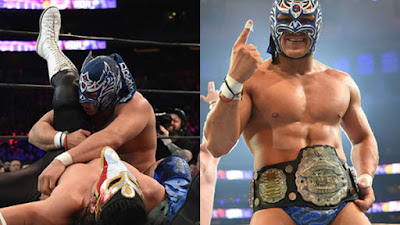 Another absolutely bonkers match followed, as Guerrillas of Destiny, The Briscoes, Villain Enterprises, and Evil & Sanada basically tried to murder each other for the IWGP and ROH Tag Titles.  This was also nonstop high spots, the most appalling of which was PCO (My brain is still broken that this is Carl Oullette) taking a powerbomb over the top rope TO THE FLOOR, and then sitting right up.  This man is obviously a psychotic.  That spot followed him doing a top rop swanton on Mark Briscoe, on the ring apron.  Just nuts.  Tama and Tanga hit a double powerbomb on Brody King to become double champions.  One helluva car wreck match.  ***1/2

Enzo & Cass had a worked, off-camera scuffle with Bully Ray to mark their ROH debut.  Imagine the company that brought us Danielson-McGuinness, Joe-Punk, and Steen-Elgin choosing to sign Enzo and fucking Cass.  Jeezus this place has gone to hell....

The hits continued with a measured but enjoyable RPW Title defense, as Zack Sabre Jr. delivered another submission clinic against Hiroshi Tanahashi.  These two have certainly had better matches, but this was well-worked and the crowd was pretty into it.  Tana teased finally reviving the Hi-Fly Flow but never got to hit it, and Zack worked different limbs throughout the match as usual, eventually locking in an arm hold for the tapout win.  Nothing amazing but a good change of pace from the previous two action sequence matches.  ***1/4

Ibushi-Naito once again stole the show, with a 20-minute work of art that had just a few too many sicko spots for comfort.  I'm shocked either of them could walk after this.  They hit each other with everything they could think of - Ibushi landed a brutal inside-out suplex, Naito hit a cradle piledriver that looked like it killed Ibushi, Ibushi hit multiple Boma Ye knees in tribute to one of his heroes, Naito hit Destino, which Ibushi kicked out of.  Ibushi finally hit the Last Ride followed by the Kamagoye to win his first Intercontinental Championship.  This wasn't quite at the level of Ibushi-Nakamura, but goddamn was it great.  I'd say this and Cole-Gargano were the two matches of the weekend.  Very excited to see Ibushi win the company's number-two belt.  ****1/2 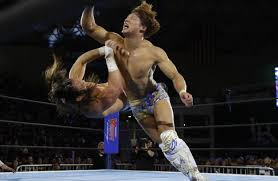 The one good ROH-only match of the night was next, as Jay Lethal defended the company's top title against Matt Taven and Marty Scurll in a Ladder Match.  Lots of good, innovative ladder spots, plenty of heat on Matt Taven, and a pretty strong finish.  This had all the necessary ingredients you'd want in a big ladder match, not the least of which was the venue, where 25 years earlier HBK-Razor created the prototype for the gimmick.  My gripe about this match was its length; 29 minutes was simply excessive when 23 would've done.  But this was very fun overall.  Toward the end of the match Taven retrieved his special extra-tall purple ladder, knocked Scurll out of the ring from it, and knocked Lethal through a bridged ladder before capturing the title.  A very good semi-main event that was unfortunately outclassed by other bouts.  ***3/4

The main event was the culmination of the months-long Okada-Jay White feud.  The young upstart champion with a 2-0 record against his former mentor would defend his IWGP Title on an epic stage.  Like most long-form NJPW main events, this started out methodical but built and built as the match went on, climaxing with an incredible finishing sequence.  White continues to grow as a main event talent, and this may be his defining match at this point.  The crowd ate up his dickish antics and adored moments like Okada's cross-body on White and Gedo.  Toward the end Okada hit the Rainmaker but White kicked out, a badge of honor reserved for very few Okada opponents.  White did hit the Blade Runner but was too exhausted to follow up with a cover, thus preserving his finish as fatal.  Okada hit two dropkicks, multiple tombstones, and capped off his return to glory with a pair of Rainmakers to win his fifth IWGP Title (newly minted I might add, and it's fucking GORGEOUS).  While not among Okada's greatest matches, this was nonetheless the best Okada-White match so far and an excellent main event for this show.  Okada is a force of nature.  ****1/2 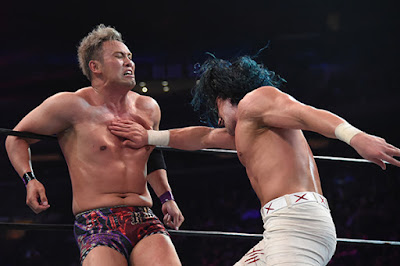 So like I said before, as a New Japan PPV this show was fantastic, with six very different matches that all delivered in some way.  As an ROH show this was not good, with one very good main event but nothing much else to show for it aside from ROH talent contributing to some of the interpromotional matchups.  New Japan is insane if they don't seek a partnership with AEW.  All Elite simply has too much great talent, and from what we're hearing a great TV deal on the table, for NJPW to not get something going with them.  If ROH insists on New Japan working exclusively with them, they'd better rebuild in a hurry; ROH's booking on this show was not worthy of a company that once delivered the best in-ring action out there.  This was a really freakin' good show, largely in spite of ROH's involvement, not because of it.

Best Match: Tetsuya Naito vs. Kota Ibushi
Worst Match: I guess the Rush-Castle squash
What I'd Change: Cut the Street Fight to ten minutes and give five more to the opener.  Cut the Ladder match by five minutes and give that to the Jrs.  I know this was supposed to be a 50-50 show between the two companies but if you honestly think ROH brought as much to the table here as New Japan I dunno what to tell you.
Most Disappointing Match: I had higher hopes for a Bully-Juice street fight.
Most Pleasant Surprise: The 4-way tag match was insane.
Overall Rating: 8.5/10