Wow.  What a fucking show this was.  The NXT gang once again smoked the shit out of the main roster, delivering their best effort to date.  NXT TakeOver: New York was everything you could want from a pro wrestling show.  Five matches, all different, all good to excellent, with an epic main event to cap it all off.  The RAW/Smackdown crew will be hard-pressed to equal this show anytime soon. 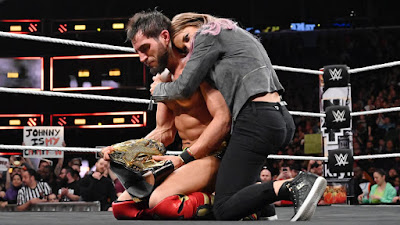 TakeOver kicked off with an absolutely stellar Tag Title match, as War Raiders defended against Ricochet & Aleister Black.  This twenty-minute clinic featured numerous instances of each team trying to one-up the other at their own wheelhouse.  Hanson & Rowe, known for their power moves, took to the air to prove to Ric and Black they could do it just as well.  Ricochet picked up the massive Hanson and hit an overhead slam to show how deceptively powerful he is, despite technically being a cruiserweight.  The nearfalls were stunning and the rabid Brooklyn crowd bought into all of them.  After missing the 630 senton, Ricochet fell victim to a brutal-looking Fallout (Animal and Hawk would be proud), and the Raiders retained.  Just a stunning opener to set the tone.  ****1/2 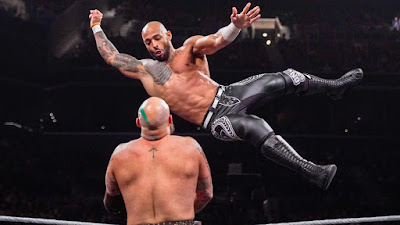 The match I was least excited about was the North American Championship, Velveteen Dream defending against MMA import Matt Riddle.  But these two delivered huge, in a perfect clash of styles.  Riddle's grapple-based offense is crisp as can be, while Dream's natural charisma and old school callbacks totally won the split crowd to his side.  Riddle got frustrated as the match wore on and began playing the heel, trying to twist Dream into knots and tap him out.  Finally at about the 17-minute mark he locked in his BroMission finisher, only for Dream to roll back and get the quick pin.  Riddle was furious and it looked like we'd see a full heel turn, but in the end he regained his "bro-jo" and accepted a fistbump from the champ.  Excellent sleeper match that sold me on Riddle (I was already on the Dream bandwagon).  **** 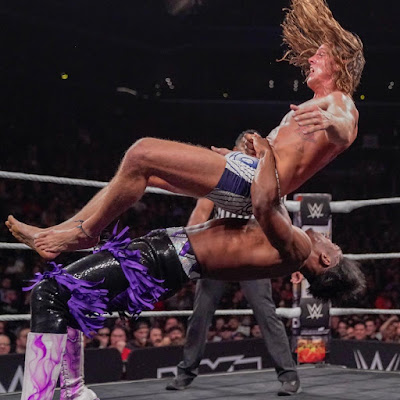 The UK Title match was next, as Pete Dunne and Walter pounded the absolute crap out of each other in a contest that would've made the NJPW NEVER Openweight division proud.  Walter played the dominant 60s monster heel to perfection, bullying Dunne throughout the match and cutting off nearly every rally with his superior size and power.  Dunne kept going after Walter's fingers to gain an advantage and try to negate the power discrepancy.  Late in the match they came to a stalemate and began exchanging strikes, with Dunne actually walking into them.  They ended up on the top turnbuckle, where Walter nailed a top rope powerbomb, followed by a top rope splash to win the UK Title and end Dunne's nearly two-year reign.  This was a magnificently rugged (if slightly overlong) fight.  Walter is a fantastic throwback to the beast villains of the Bruno era, and should hold onto that belt for a long time.  ****1/4 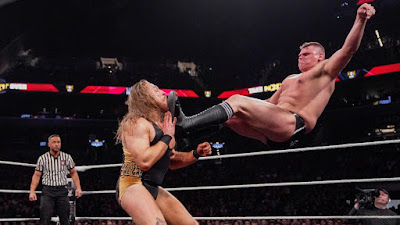 The weakest match on the show (and still a helluva bout in its own right) was the Women's 4-Way, as Shayna Baszler defended against Kairi Sane, Io Shirai and Bianca Belair.  This was non-stop action from start to finish, and the two Japanese women stole the match, dazzling the crowd with their aerial tactics.  My only complaint about this match was that we didn't see enough Sane-Shirai exchanges.  The two longtime friends mostly worked together and only clashed when absolutely necessary.  Fifteen minutes in, Belair hit the KOD on Sane and Shirai simultaneously (crazy spot) but got snared in Shayna's choke for the tapout.  On any other show this match would've been a highlight.  ***1/2 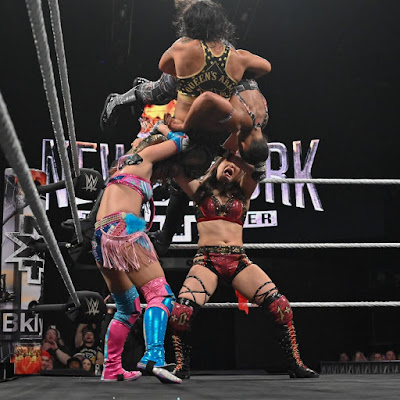 The NXT Championship main event was another example of my favorite gimmick match, 2/3 Falls.  Adam Cole and Johnny Gargano started out fairly slow, and what struck me about this match overall was how unremarkable the first two falls seemed to be (not that they weren't well-worked).  The first fall lasted 14 minutes before Cole got on the board with a Shining Wizard.  Six minutes later Gargano tied it up with his Garga-No Escape.  The match truly began in earnest with the third fall, which launched it into the stratosphere.  For 18 minutes these two threw everything at each other, building to an explosive pitch by the end.  Cole's Undisputed Era pals tried to interfere but Gargano singlehandedly fought them off, only to walk into two superkicks and a Last Shot.  Cole pinned him and literally everyone was sure this was the finish, but Gargano kicked out, and the place went apeshit.  Gargano ducked another Last Shot and locked in Garga-No Escape, rolling Cole into the center of the ring for the tap out at 38 minutes.  This was an incredible match that started with the crowd almost totally behind Cole, but ended with a jubilant reaction with Gargano's win.  My only gripe is just how much Gargano kicked out of - this was classic SuperCena stuff and I felt like they maybe went just a little too far with it.  Aside from that though, Gargano-Cole was one of the best matches in NXT history, an easy MOTY candidate, and a perfect way for such an amazing show to climax.  Post-match, Gargano's wife Candace LaRae and an injured Tomasso Ciampa came out to congratulate them, ending the show on an emotional high note.  What a match.  ****3/4 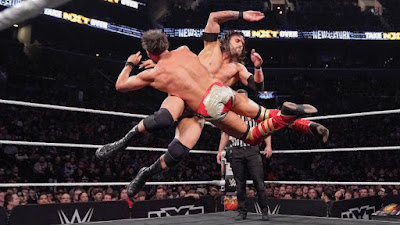 NXT New York has surpassed 2016's Dallas show as the brand's new yardstick.  This show had nary a low point, all five matches delivered huge, and they were all totally different.  This, Vince McMahon, is how you do WrestleMania weekend.

Best Match: Johnny Gargano vs. Adam Cole
Worst Match: Women's 4-Way, but this was damn good
What I'd Change: The UK Title match could've been maybe five minutes shorter, but that's a minor gripe
Most Disappointing Match: None
Most Pleasant Surprise: That NXT topped the Dallas show
Overall Rating: I gotta go the full monty here - 10/10