Welcome to our third and final Top Ten Things pertaining to the songs of The Beatles!  I've saved my favorite for last, as today I'll be talking about the best songs written by the Beatle everyone thinks of first, John Lennon.  Check out the George and Paul lists if you haven't already... 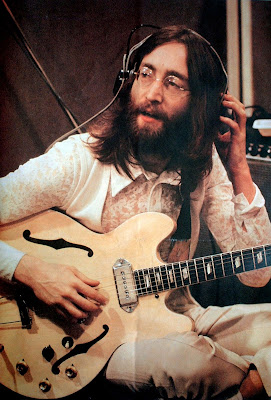 John was sort of the unofficial leader of the group over their first few years, the oldest and most irreverent of the three original members (Ringo didn't join until 1962), and initially the strongest songwriter.  Despite the band having to clean up their image when Brian Epstein signed on as their manager, trading in leather jackets and greaser haircuts for suits and their trademark mop-tops, John always retained a bit of the bad boy image and attitude he originally brought to the table.  Unlike other pop stars of the period, John presented himself in interviews with candor and a zany sense of humor, and would later become politically outspoken and controversial, one of the first popular musicians to really get involved in activism.

As for his songwriting, I consider John the most creative of the band, always thinking outside the box and coming up with envelope-pushing ideas.  Where Paul's songs tended to be more inviting and structurally conventional while introducing new orchestration, John's tunes often had an edge to them, along with a dark surrealist bent.  Many of his greatest compositions played with words to evoke bizarre mental imagery; he could seemingly find inspiration in almost anything and turn it into a memorable song lyric.  For my money John's songs stole the show on most of The Beatles' albums, particularly from Revolver through the White Album; nearly every favorite of mine on those four records is a John song.  Sadly after the White Album John began to distance himself from all things Beatles, and his contributions to their last two records were somewhat reluctant.  But when you add up all the iconic Beatles songs over their world-changing run, John scores the most points in my book.  He may not have been the strongest overall musician in the group or had the best voice (Paul takes both of those honors), but I'd say he was easily the most imaginative member of the band.

John described this song as the first serious lyric he ever wrote, a bittersweet meditation on his childhood that included nods to absent friends (Stuart Sutcliffe for example).  An introspective song bordering on anthemic, "In My Life" showed remarkable maturity and thoughtfulness beyond John's 25 years.

Being for the Benefit of Mr. Kite

Inspired by an 18th century circus poster John bought at an antique shop, "Mr. Kite" got its lyrics almost verbatim from said poster, but musically the track is hugely groundbreaking.  To achieve a circus atmosphere John and producer George Martin played an organ break in the middle of the song, and in the outro Martin had the tape cut into footlong sections and thrown in the air, then reassembled at random to achieve a dreamlike, surrealistic quality.  On the band's most psychedelic album, "Mr. Kite" may be the most psychedelic song.

Written for Prudence Farrow, who became so immersed in Transcendental Meditation she often refused to come out of her hut for days at a time, "Dear Prudence" became a life-affirming anthem about experiencing the world fully and not getting lost in oneself.  Built on a delicate finger-picked guitar line, the song builds to a beautiful emotional peak (George's lead guitar melody near the end chokes me up every time I hear it); in execution "Dear Prudence" ended up so much more powerful than the simple bit of friendly encouragement it began as.  This one has grown on me leaps and bounds over the years. 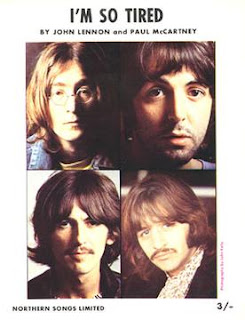 A simple, two-minute song John wrote in India during a bout of insomnia, "I'm So Tired" is one of those songs whose palpable conveyance of mood elevates it above its humble origins; John's vocal performance has him sounding wrung out and desperate, giving the track incredible efficacy.  I first became aware of the song due to its use in the documentary The Compleat Beatles, during narrator Malcolm McDowall's description of the band's breakup, and it struck me as such a perfect piece of music for that moment.  "I'm So Tired" sounds like a man who's reached the end of his rope. 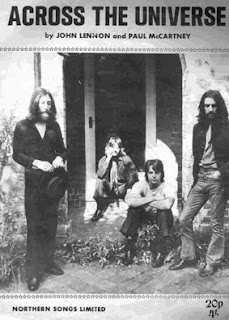 One of John's greatest lyrical achievements (initially the result of an argument with his first wife Cynthia) was this gorgeous cosmic ballad originally recorded in early 1968 and released on a World Wildlife Fund compilation album.  Not entirely happy with the recording, John brought the song to the Let It Be sessions, where it could be heard in rough form in the accompanying film, thus the label insisted the album should include it as well.  But the band never did a proper multitrack recording during the sessions so Phil Spector, tasked with assembling an album, cannibalized the original version, slowing it down and adding orchestration to flesh it out.  The result is a beautiful, poignant, existential song about finding inner peace. Written and recorded for the first-ever worldwide television broadcast, "All You Need Is Love" was deliberately kept as lyrically simple as possible so its message could be understood across all languages.  Yet another anthem from John (his first of many songs to tackle the subject of politics), the song became perhaps the cultural climax of the Summer of Love and the Flower Power movement, and remains timeless and universal.  Moreover, "All You Need Is Love," more than any other Beatles song, summed up their underlying message; Paul would later say that if The Beatles' career could be boiled down to a single word it would indeed be "love." 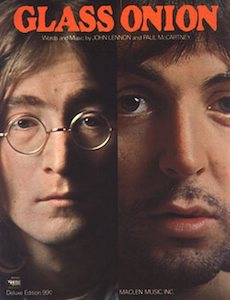 The Beatles' songs, John's in particular, had lent themselves to multiple interpretations by fans, and "Glass Onion" was written as a way to poke fun at people who read too much into his lyrics.  Musically rather bleak and punctuated by Paul's gut-punch of a bass tone, the lyrics are nonetheless playfully self-referential and tongue-in-cheek, as though meant to further confuse those people playing Beatles records backwards to uncover imagined hidden meanings.  This is one of my favorite White Album tracks. 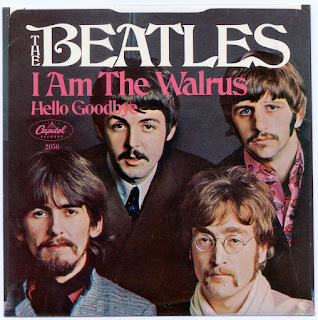 Probably John's most surrealistic song, influenced by the writings of Lewis Carroll, "I Am the Walrus" is chock full of evocative word-imagery and buried references.  His main contribution to the Magical Mystery Tour soundtrack easily steals the show and contains some of the most impressive production of any Beatles songs, with dense strings, a choir adding chanted phrases, and snippets of an AM radio broadcast of King Lear.  This song is dripping with Salvador Dali-esque atmosphere and will forever be one of John's signature works.


5. Happiness is a Warm Gun 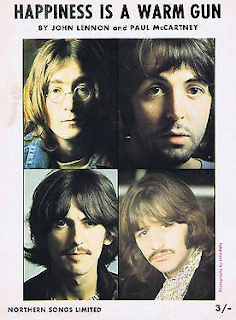 Its title lifted from an article in American Rifleman magazine ("I just thought it was a fantastic, insane thing to say. It means you just shot something."), "HIAWG" is the most complex song on the White Album, the result of three different song ideas merged together.  The intro is a somber finger-picked section that gives way to a slow rock passage containing abstract lyrics written after an acid trip.  The song then moves to a shadowy blues-rock waltz before settling on a 1950s doo wop pastiche where the title takes on a sexual meaning (John had just begun to date Yoko Ono at the time).  Like Paul's "You Never Give Me Your Money," this song demonstrates outstanding compositional dexterity with its seemingly incongruous sections and becomes greater than the sum of its parts.  It's both a John Lennon top fiver and a White Album top fiver for me.


4. Lucy in the Sky with Diamonds 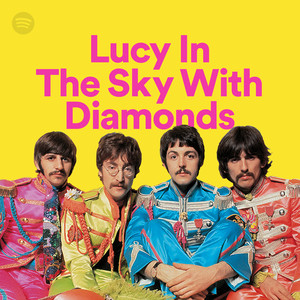 Probably the most well-known psychedelic song of the band's entire catalogue, John's iconic tune was inspired by a drawing his son Julian brought home from preschool, which bore the same title.  Infamously controversial due to the initials "LSD" appearing in the title, the song was banned from BBC radio.  But John maintained until his death that the initials were in fact a coincidence and the abstract lyrical content was not about drugs but rather inspired by Lewis Carroll.  Regardless, "Lucy" is one of the highlights of the band's most famous album and probably the song most closely associated with their psychedelic period. 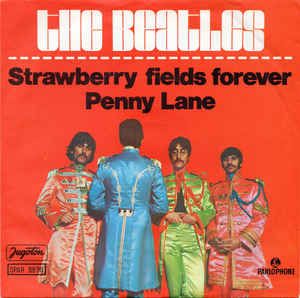 And yet another lyrically fantastical song is "Strawberry Fields," written alongside "Penny Lane" as the first two tunes intended for the album that would become Sgt. Pepper (also the first recorded after the band had stopped touring).  But the US record label was pushing the band for a new single, thus both songs were released as a Double A-side, each with a music video.  Strawberry Field was a local children's home near where John grew up and served as its chorus inspiration, but the verses were impressionistic poetry that defied conventional analysis.  The final song is an amalgam of two very different takes, recorded in different keys and tempos but altered by George Martin so they fit together, complete with an orchestral score.  "Strawberry Fields" is another example of John's endeavors to push lyrical and musical boundaries and create something truly unique, and is one of his most atmospheric songs. 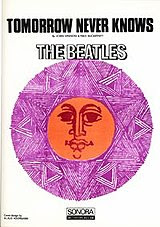 One of John's first explorations of psychedelia, inspired by his own LSD use and The Tibetan Book of the Dead, "Tomorrow Never Knows" (The title was the result of a Ringo malapropism) was the first song recorded for the Revolver sessions, as well as the band's most striking departure from their signature sound.  Full of avant-garde recording techniques (such as the first use of backward tracking) and unconventional instrumentation, "Tomorrow Never Knows" was intended to sound like the cry of a monk from a mountaintop giving spiritual advice, the lyrics serving almost as a set of instructions for meditation.  Due to the use of tape loops added to the song in real time, this particular combination of sounds could never be duplicated exactly.  This song is perhaps the most creative and barrier-shattering of John's career.  No real chord changes, no traditional structure, impossible to reproduce live, "Tomorrow Never Knows" is one of the band's greatest sonic accomplishments. 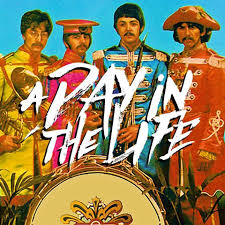 But John's greatest song of all time, Beatles or not, has to be the Sgt. Pepper closer (Paul contributed the middle section and conducted the orchestra but this is primarily John's tune), one of the most ambitious of the band's entire catalog.  The Pepper grand finale stars off as a simple guitar/piano ballad, with John's haunting vocal singing about various news headlines, but then twice builds to what George Martin referred to as "an orgasm of sound," with a classical orchestra playing random notes that escalate chromatically to a peak.  The second time, we hear the magnificent exclamation point of a massive piano chord that slowly decays over thirty-plus seconds, achieved by multiple people playing the chord over various octaves and several mics being adjusted to make the decay last as long as possible.  "A Day in the Life" is a masterpiece of songwriting and production, the climax of The Beatles' most groundbreaking album.  Thus it takes the top spot.


And that's how I rank my favorite Beatles songs from my favorite Beatle.  I hope you enjoyed reading this trilogy of Fab Four-related articles.  Don't forget to check out the George and Paul editions if you haven't already.